Did rainwater collected in a man's backyard show dangerously high levels of barium in lab test results conducted for a 2007 TV station investigation about "chemtrails"? No, that's not true: The lab results for the test sample did not show an unsafe level of barium. The reporter made an error converting the units of measure used in the lab report to the units of measure used by the Environmental Protection Agency (EPA). This conversion error caused the barium levels in the sample to be misinterpreted as three times higher than the EPA's maximum contaminant level (MCL) when it was actually about 30 times lower.

The original news report on Shreveport, Louisiana's KSLA News 12 was posted on November 9, 2007, as an article and a broadcast segment. These are no longer on the KSLA website but the article -- without corrections -- was recorded by web.archive.org on November 16, 2007. A short segment of the newscast was posted on Facebook on July 13, 2022. It was captioned:

Still don't believe chemtrails are real and that it isn't out government poisoning us? It's not a conspiracy theory any longer.

Text added in the margin of the video reads:

IN THE AIR
IN THE WATER

The news story revolves around a water sample collected in the backyard of a concerned man. KSLA sent the sample to a lab for testing, and the results are shown (below). 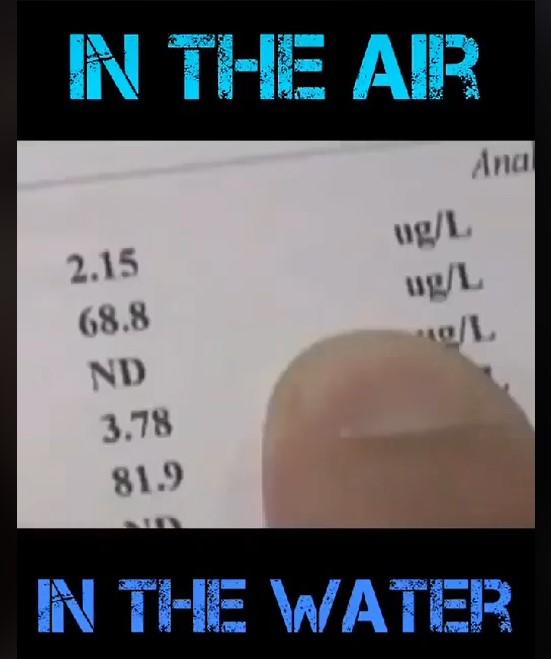 As the reporter goes over the results pictured in the video, the words he says do not match the numbers written in the lab report. The paper reads 68.8 ug/L (this is micrograms per liter, or parts per billion), but the reporter says:

KSLA had the sample tested at a lab. The results? ... a high level of barium, 6.8 parts per million - more than three times the toxic level set by the EPA

Lead Stories reached out to the EPA Office of Ground Water and Drinking Water for clarification about the levels of barium considered safe and about the conversion of ug/L to mg/L. They replied by email on August 4, 2022:

As visible in the table of regulated contaminants, the MCL [maximum contaminant level] for barium is 2 ppm [parts per million]. If drinking water supplied by a public water system were to contain 68.8 ppm (mg/L) of barium, it would certainly violate the NPDWRs. However, µg/L is much less than mg/L. 68.8 µg/L equals 68.8 parts per billion, which is comfortably below the safe limit of barium in drinking water.

In a September 1, 2008, blog post on skepticalinquirer.org titled "The Chemtrail Conspiracy," physicist Dave Thomas reviews the error converting µg/L to parts per million that resulted in this misunderstanding. He writes:

'KSLA News 12 had the sample tested at a lab. The results: A high level of barium, 6.8 parts per million, (ppm). That's more than three times the toxic level set by the Environmental Protection Agency, or EPA.' I had to inform my angry correspondent of a problem--the actual video clearly shows 68.8 µg/L (micrograms per liter), or equivalently, 68.8 ppb (parts per billion). The reporter overestimated by a factor of one hundred, because he read the '68.8' as '6.8,' and also confused million with billion. The measured levels were far less than EPA limits.