Did the world's first female F-35 pilot crash a plane on its first flight? No, that's not true: According to Lt. Col. (retired) Christine Mau, she has "never crashed any airplane." A public affairs officer with the U.S. Air Force (USAF) confirmed that the woman pictured is Mau. According to Air Force public affairs, she was the first female pilot to fly the F-35 in 2015 and did so successfully.

The claim appeared in a Facebook post (archived here) on July 19, 2022, under two headlines in side-by-side boxes.

On the left, it says, "The first female F-35 pilot proves flying is a gender equalizer." On the right it says: 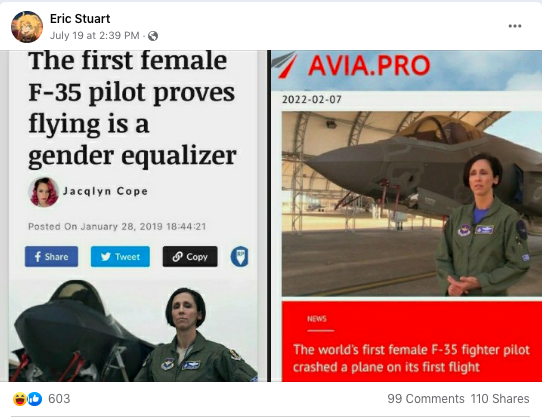 The article referred to in the Facebook post in the right hand box is dated February 7, 2022, and claims:

The world's first female pilot, crashed an F-35 fighter on her first try.

It also said the crash was by "the world's first female F-35 pilot" and it was "her first flight from the deck of an aircraft carrier."

Mau wrote in a LinkedIn message to Lead Stories on August 1, 2022, that she is surprised this false claim is "still circulating." She wrote:

Yes, I was the first woman to fly the F-35. I flew it from 2015-2017 when I retired from the US Air Force with 20 years of service. I have never crashed any airplane nor have I ever flown with the US Navy or landed on a carrier. I have not flown the F-35 since April 2017 and now teach F-35 pilots in the classroom and simulator at Eglin AFB as a contractor.

In an email to Lead Stories on August 1, 2022, Capt. Laura M. Hayden with Public Affairs at Ramstein Air Base, Germany, confirmed Mau's identity:

The woman pictured is USAF Lt Col (retired) Christine Mau, she was the first female pilot to fly the F-35 in 2015.

Hayden provided this link to a report on Mau's successful first flight in the F-35, which was an Air Force mission, therefore not a carrier take-off or landing.

Hayden said the AVIA.PRO article does not refer to an Air Force accident:

The article pictured is referring to a U.S. Navy crash that from what I gather occurred earlier this year, but I cannot comment further on that incident or any investigation.