Does a TikTok video prove that Ukrainians are staging Russian attacks? No, that's not true: The video is behind-the-scenes footage of a Ukrainian film that is described by its Facebook page as depicting "the heroic actions of the residents of Kiev during the occupation."

The claim was implied in a TikTok video posted in August 2022. The video included the hashtags #Ucraina and #guerra in its caption. The text included in the video, translated from Italian, read:

In Gostomel, Ukraine, Kiev regime 'movie directors' are staging a video on the alleged atrocities made by Russian troops against civilians.

This is how the TikTok video appeared at the time of writing: 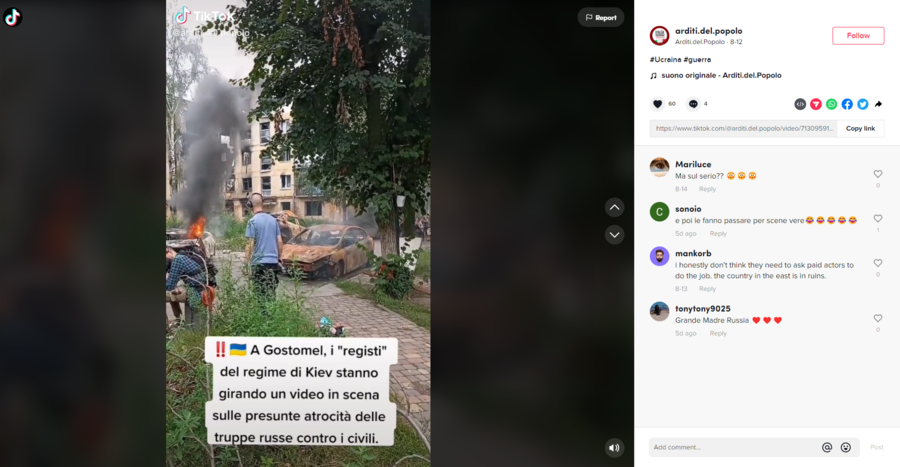 The footage used in the TikTok video making the claim came from this TikTok video, posted in August 2022 and screenshotted below: 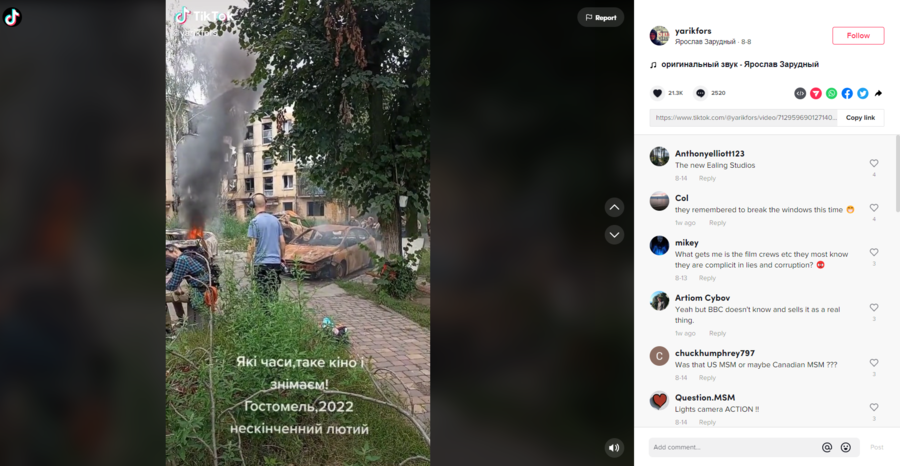 This footage was taken while on the set for the film "Region of Heroes." The Facebook page for the film summarizes it by saying it "will demonstrate the heroic actions of the residents of Kiev during the occupation. These are the people, thanks to whom tens of thousands of Ukrainian lives were saved."

Область героїв / Region of Heroes will be a large-scale film remake of 5 real-life stories about 'angels who went through hell'. The film project created by Ukrainian producer and actor Alexei Komarovsky / Aleks Komarovskii will show the heroic actions of the residents of Kiev during the occupation - people thanks to whom tens of thousands of Ukrainian lives were saved.

In an email sent to Lead Stories on August 22, 2022, the public relations team for "Region of Heroes" told us:

The video posted on TikTok is a video of an eyewitness of shooting of a Ukrainian documentary film about Kyiv region residents during the Russian occupation, based on real events.

We don't film any fakes about russia. You will be able to verify this when the film is released in cinemas in the fall.

The public relations team also claimed that the "Russian public having nothing in common with our filming, uses this video to spread false information."

There are more behind-the-scenes images of the film featured in the articles found here and here.