Does the airline industry give passengers incorrect information about bracing themselves for a crash because the financial cost to airlines is $40 million lower for passenger deaths than it is when passengers survive? No, that's not true. The Federal Aviation Administration (FAA) has conducted extended research on the brace position and found it increases the chance of survival, and that the financial costs to airlines would vary by circumstance.

The claim appeared in an August 18, 2022, TikTok post under the title "Exposing the Truth, Part 3" It opened:

Theory: Airlines purposely tell their passengers the incorrect way to brace themselves in the event of a crash to preserve their teeth to identify them. It would cost the airline up to 40M less if the passengers died, rather than survived. 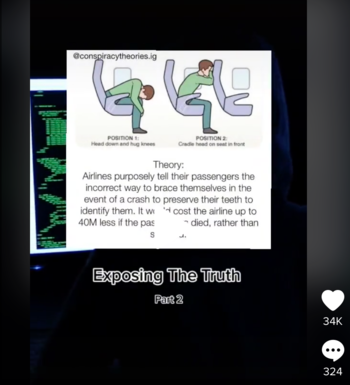 Experts on aviation safety and tort claims said the premise of the post is false because it presumes the airlines benefit from lying about safety procedures that don't work and will save millions in compensation.

"It's incorrect," said Frank Jackman, director of communications and research at the nonprofit Flight Safety Foundation in Washington, DC. "There's no reason for airlines to intentionally tell passengers to use an incorrect way to brace themselves."

As defined by the FAA in Appendix 4 of a 2019 advisory circular, the brace position is designed to minimize injury and increases survivability during a crash because it positions a passenger's head, arms and legs in a protective position.

There are two reasons to brace for impact, the advisory notes: to reduce the flailing, or wild swinging, of passenger arms and legs, and to place the body, especially the head, against the surface it would likely strike during a crash.

The purpose of the brace position is to get the body in a position that can better withstand the impact of a crash before it occurs, said Helen Zienkievicz, a cabin safety expert who taught on-board safety and conducted safety investigations for United Airlines for more than two decades.

"When the aircraft is accelerating, there's a tremendous G-force, so the purpose is to get people in the position that their body would be forced into because that would reduce the G-force," said Zienkievicz, now a safety consultant based in Oklahoma City. "So by having the person's head down lower than the head of the seat, it's going to reduce the potential for injuries, including head injuries.

The FAA advisory supports this conclusion. It states that research has found that "passengers who assume a brace position prior to impact significantly reduce the likelihood and severity of injury to the head, arms and legs," and adds that uninjured crash survivors are more likely to "expeditiously evaluate the aircraft, thereby increasing survivability."

The 2022 recommendations, which update a 2015 crash report by the FAA's Civil Aerospace Medical Institute, known as CAMI, include a variety of brace positions because of the variety of types of aircraft and seats configurations, such as how close together the seats are, a person's size and other factors. However, the recommendations are based on general crash safety principles that apply to the majority of passengers, according to the FAA's Cabin Safety Subject Index.

The position recommendations include bending over as far as possible with the head down, feet tucked back and arms wrapped under the knees, if there is sufficient room between the seats. Passengers should place the head against the seat in front of them or tuck their feet back and grasp their lower legs when there is less room. Another version of a brace position includes the passenger placing the hands and forearms on the seat in front of him or her.

Two of the positions are correctly represented in the post's graphic.

There are differing opinions on the various brace positions, Zienkievicz said, in part because the circumstances and facts of each crash differ.

"But the general position is considered the most effective," she said, adding that it won't increase the likelihood of death. "It's aviation industry practice globally, not just in the US."

Jackman notes that airline safety teams, the FAA, CAMI, the NTSB and parallel agencies around the globe broadly share accident safety analyses. That's not to assign blame, he said, but to collaborate on recommendations and changes that can increase safety.

"That's the primary reason the industry is as safe as it is,"he said. "Yes, (airlines) compete, but not when it comes to safety."

The post's contention that passengers who die in a crash automatically cost airlines any set amount of money is a false premise, said Larry Levine, a professor who teaches tort law at the University of the Pacific's McGeorge School of Law in Sacramento, California.

"It would really depend on the circumstance, unless (the post's author) can provide a source that says, this is the basis for this calculation," he said. "As a blanket proposition, it seems suspect."

It is possible that the cost of compensating a crash survivor for injuries over a lifetime could be more expensive than a single death claim, Levine said. But the overall costs would, again, depend on individual circumstances, including the type of accident, how it occurred, what injury was suffered or what a person's lifetime income might be.

There are also many ways for injured passengers or families of deceased passengers to secure renumeration or compensation, including negotiated settlements, compensatory damages and punitive damages. Each of these options has its own circumstances and outcomes, Levine said.

Industries and government agencies, including the FAA, have done cost-benefit analyses in order to ascribe value to human life, Levine said. It's a sort of heartless business decision that seeks to balance some number of lost human lives against the cost of mediating the economic impact of changing practices or adding regulations, he explained.