Whites and Asians need not apply.
Bank of America on Wednesday announced a new mortgage home loan program for first-time homebuyers.
Blacks and Hispanics will be able to apply for a zero down payment, zero closing cost mortgage with Bank of America's new lending program in select cities. Read more, link in bio. 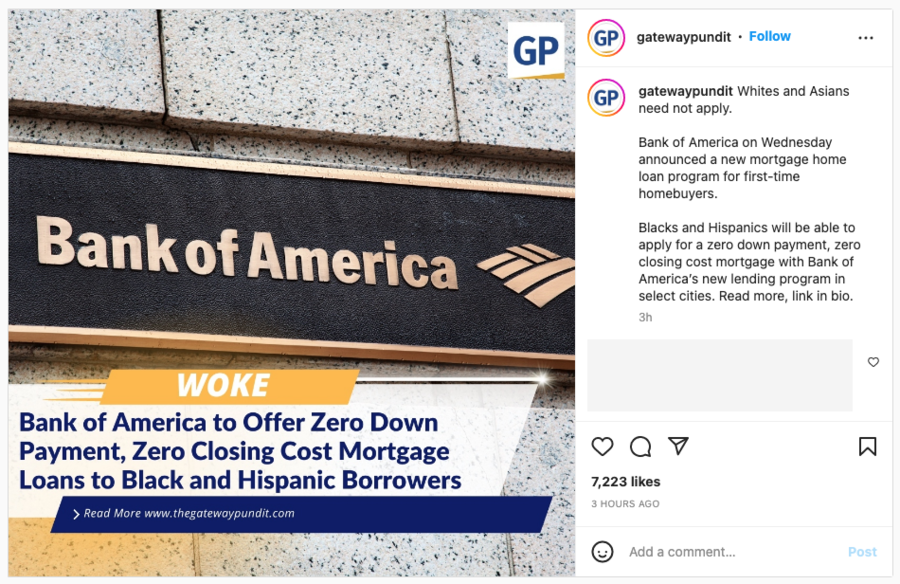 Bank of America announced its Community Affordable Loan Solution via a news release on August 30, 2022. The release describes the mortgage program as "a new zero down payment, zero closing cost mortgage solution for first-time homebuyers, which will be available in designated markets, including certain Black/African American and/or Hispanic-Latino neighborhoods in Charlotte, Dallas, Detroit, Los Angeles and Miami." The news release notes the disparities in homeownership based on race and implies that the program wants to help close those gaps. It does not say or even imply that the program is only for Black and Hispanic borrowers:

According to the National Association of Realtors, today there is a nearly 30-percentage-point gap in homeownership between White and Black Americans; for Hispanic buyers, the gap is nearly 20 percent. And the competitive housing market has made it even more difficult for potential homebuyers, especially people of color, to buy homes.

'Homeownership strengthens our communities and can help individuals and families to build wealth over time,' said AJ Barkley, head of neighborhood and community lending for Bank of America. 'Our Community Affordable Loan Solution will help make the dream of sustained homeownership attainable for more Black and Hispanic families, and it is part of our broader commitment to the communities that we serve.'

In an email sent to Lead Stories on September 7, 2022, a Bank of America spokesperson, who did not want to be identified by name, told us:

Anyone from any race/ethnicity is eligible to apply for this mortgage. Race is not a factor in determining eligibility.

The spokesperson also reiterated that "eligibility for the loan is based primarily on income and home location."