Does a viral video describing a father's "deathbed confession" prove the U.S. government faked the 1969 moon landing? No, that's not true: There is a significant amount of evidence that NASA landed on the moon and experts Lead Stories spoke with refuted claims suggesting otherwise. In the video, a man who identifies himself as Gene Gilmore (given name Eugene Reuben Akers, aka Ackers) says his father was a NASA "insider" named Cyrus Eugene Akers who had confessed on his deathbed that he witnessed the U.S. government faking the televised moon landing in a studio recording in 1968. The video was said to have been posted on behalf of, or for, Bart Sibrel, an American conspiracy theorist who has pushed the false claim that U.S. government officials staged the Apollo moon landings.

The claim appeared in a Facebook post on September 13, 2022. The post caption said: "Eugene Rubin Ackers moon landing hoax confession given to Bart Sibrel on his death bed, posted by Bart yesterday.

NASA refutes the claims in an email sent to Lead Stories on September 20, 2022.

"There is a significant amount of evidence to support NASA landed 12 astronauts on the moon from 1969 to 1972," a NASA spokesperson told Lead Stories. "We collected 842 pounds of moon rocks that have been studied by scientists worldwide for decades. From these rocks, we've learned that the moon was once part of the Earth, the moon is about 4.5 billion years old, and that most of the moon's craters are caused by impact, not volcanism."

China's lunar exploration program, including a January of 2019 landing on the far side of the moon, has not challenged geological or other findings shared from the U.S. landings.

When digging further into the claims made by the man in the video, Lead Stories also found evidence that someone manipulated internet webpages after the video was posted online in what appears to be an attempt to lend the video further credibility. Here's what we found.

The video was said to have been recorded on April 12, 2020, roughly two years before the man had supposedly died of an unspecified cancer. The man claimed that his father, Cyrus Eugene Akers, was a military police officer who, in 1968, was stationed at Cannon Air Force Base in New Mexico.

The man in the video claims a recording of his father's deathbed confession was "destroyed in a fire" of "unknown origin." The Facebook video includes at the 0:40 mark the text "Computer Confiscated by Government Raid." It did not specify the date of the raid, where it occurred or who the raid was focused on. No documentary or other evidence was provided to confirm any of these claims.

Who is Gene Gilmore?

The man in the video claimed to be named Gene Gilmore, given name Eugene Akers. The video was said to have been recorded on April 12, 2020, and was made public after the confessor's death on February 13, 2022. However, the man in the video did not provide proof of his identity, nor did he explain why he had changed his birth name.

"We must report that neither the State Archives nor the State Library can confirm that Gene Gilmore (or any of his aliases) died on February 13, 2022, or the authenticity of this obituary," a spokesperson told Lead Stories in an email sent on September 22, 2022.

Digging into the "father's" past

The man in the video claimed that his father was a military police officer named Cyrus Eugene Akers. Lead Stories found a person by that same name recorded on the Find a Grave website as having died September 28, 2002, and buried in the Florida National Cemetery. However, we were not able to independently verify that the man in the video is indeed the son of Akers.

Akers was listed as a sergeant in the U.S. Air Force who served in Korea and Vietnam. Lead Stories cross-referenced this information with the National Cemetery Administration database: 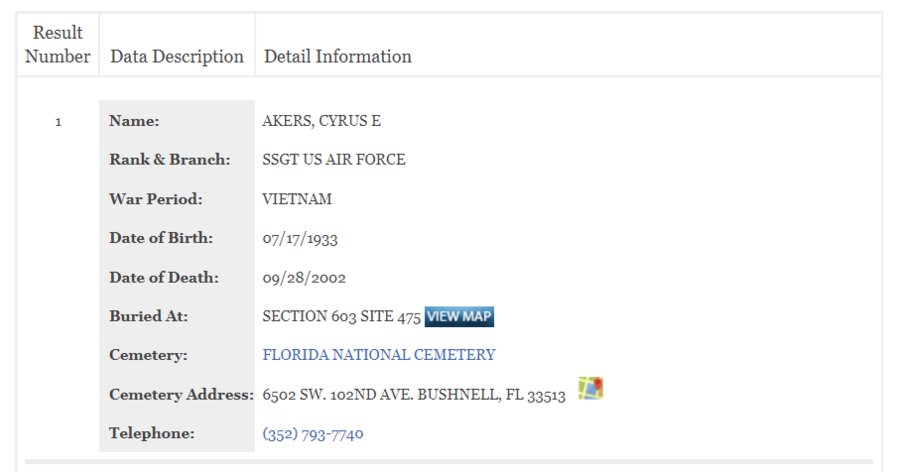 Legitimate photographs of the tombstone were added to the Find a Gravesite webpage in 2010. However, two new photos were added to the page (archived here) on September 13 and 17, 2022, after the "deathbed confession" video was posted. This suggests that someone intentionally updated the page to include false information that would validate points made in the video.

The first photograph that was added was a screengrab of the "father" shown in the video: 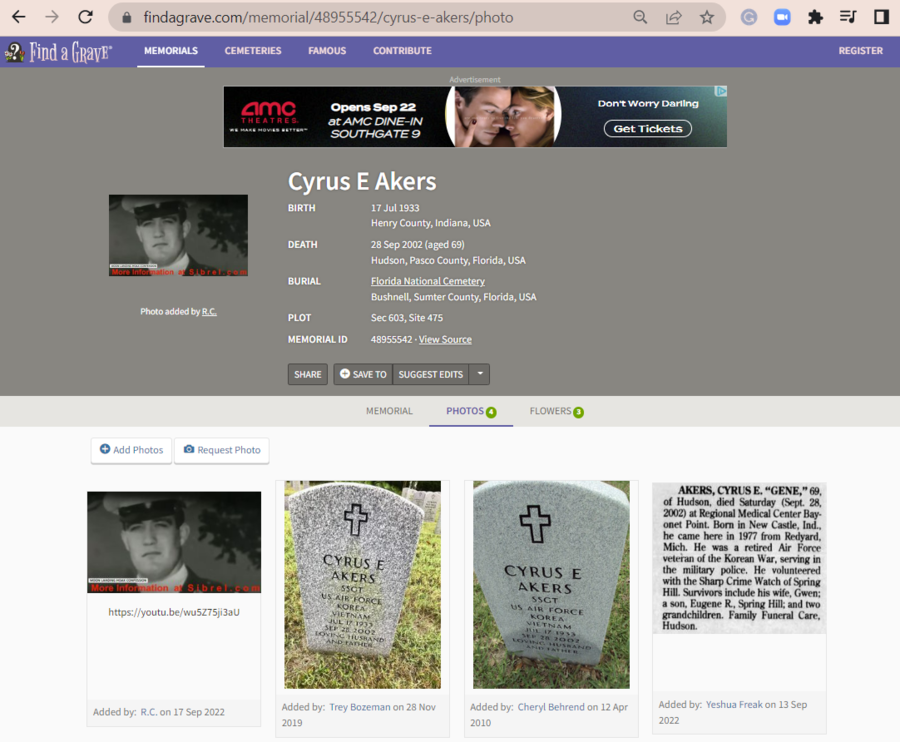 The second photograph ( the bottom right image in the screengrab above) includes what looks like an obituary. It reads:

AKERS, CYRUS E. "GENE," 69 of Hudson, died Saturday (Sept. 28, 2002) at Regional Medical Center Bayonet Point. Born in New Castle, Ind., he came here in 1977 from Redyard, Mich. He was a retired Air Force veteran of the Korean War, serving in the military police. He volunteered with the Sharp Crime Watch of Spring Hill. Survivors include his wife, Gwen; a son, Eugene R., Spring Hill; and two grandchildren. Family Care, Hudson.

But, no publication date nor outlet is listed. A verbatim Google search of the text did not return any results. Lead Stories reached out to Find a Grave to determine if it is possible to track who added the photographs.

The man in the video presented what he claimed to be his father's badge number (either "07596" or "D7596"). Lead Stories filed a Freedom of Information Act request with the National Personnel Records Center at the National Archives in Washington to verify the authenticity of the badge number and the person's military history, and to find any next of kin, named either Gene Gilmore or Eugene Ruben Akers. We will update this article, if appropriate, when the National Archives respond.