Was an American flag with no stars behind former President Donald Trump at a rally and does such a flag mean those that refuse to surrender will face "total annihilation"? No, that's not true: The lighting in the image may appear to be obscuring the stars but multiple photographs from news sites and photo agencies from the rally where the flag appeared show that the stars were visible. A duty officer for the Pentagon told Lead Stories that the claim about a flag with no stars being a secret warning about death without surrender is "ridiculous" and "untrue."

So, about that flag at the Trump rally... the one WITHOUT STARS 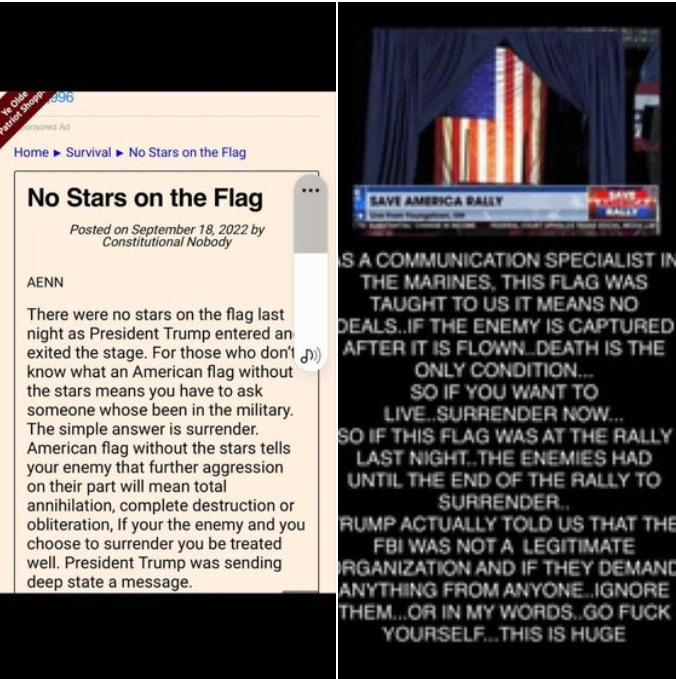 A picture published by the Washington Post also shows the American flag has stars: 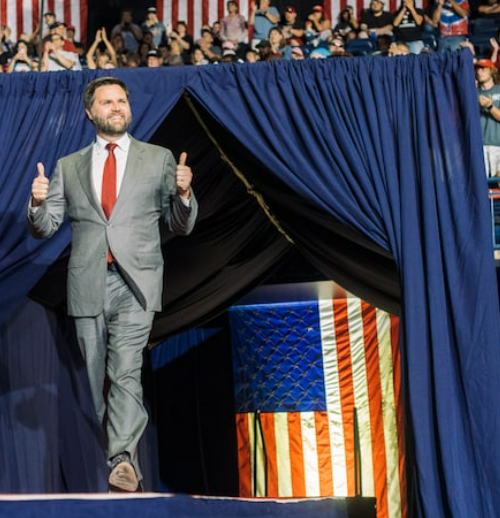 The Facebook post also claims that an American flag without stars is a warning to enemies that they must surrender and if they do not they will be killed:

There were no stars on the flag last night as President Trump entered and exited the stage. For those who don't know what an American flag without the stars means you have to ask someone whose been in the military. The simple answer is surrender. American flag without the stars tells your enemy that further aggression on their part will mean total annihilation, complete destruction or obliteration, If your the enemy and you choose to surrender you be treated well. President Trump was sending deep state a message.

"That's ridiculous. Untrue," the Pentagon duty officer for defense press operations told Lead Stories via email on September 23, 2022, when asked about the claim that someone in the military would have secret knowledge of an American flag with no stars being a threat of death without surrender.

The Smithsonian Museum website page titled "Facts about the United States Flag" makes no mention of an American flag without stars being a surrender warning.

The Veterans of Foreign Wars published a resource titled "Flag Etiquette" that states nothing about an American flag with no stars being a sign of surrender.

The absence of any reputable documentation on an American flag with no stars being a warning for enemies to surrender or face "total annihilation" indicates this claim is baseless.

The post claims "President Trump was sending a deep state message." The "deep state" is part of an unfounded QAnon conspiracy theory in a continuing series of prophecies that don't come true. Its believers claim that a secret shadow government is running the United States but that Trump is waging a war, or "the storm," against a cabal of evil Democrats, Hollywood elites and satanists who are sex trafficking children worldwide, killing them and eating them. This is not supported by any public evidence and has been debunked by Lead Stories and national news outlets including The New York Times.