Does a photo of a man in a military flight suit appearing to wear a #TEAMCHEMTRAIL patch as he stands in front of a large silver tank provide evidence that the military is spraying "chemtrails"? No, that's not true: This image has been altered. The photo originally showed the master sergeant's Air Force Reserve Command patch. A #TEAMCHEMTRAIL patch has been digitally edited in its place. There once was a teamchemtrail.com website that offered patches and stickers to poke fun at the chemtrail conspiracy. The original photo was taken at an airshow at Westover Air Reserve base in Chicopee, Massachusetts in 2008. It shows the interior of a C-130 equipped with mosquito-spraying equipment. Experts from several fields agree that there is no secret large-scale atmospheric program spraying "chemtrails."

The altered image has appeared on conspiracy blogs at least as far back as 2014 (archived here). The original photo (archived here) was posted on a personal blog about New England's Pioneer Valley on September 7, 2008. The photo appears in a much-circulated collection of photos showing specialized equipment that has been misrepresented as chemtrail equipment. The photo was posted on Facebook along with a set of other photos on August 22, 2022. The post for the set of photos opened:

So this photo on the top (#1 photo) was one I took today at the lake AFTER FOUR hours of us watching it being sprayed and then slowly spread across the sky WHILE other typical commercial passenger jets flew through it at the same altitude, and under the same weather conditions leaving nothing but normal vapor behind them that dissipated within 20 seconds as normal vapor does. The other photos are things to look at and question with your critical thinking cap. I was a pilot for many years and owned my own airplane in the 90's. I took climatology in college and got an A. I know clouds. I was also a military officer's wife and could share some stories about this stuff that would make your toes curl, and I'll just leave it at that for now. You can deduct and deduce for yourself if you're willing to look up and off your phone long enough to see what's truly going on. 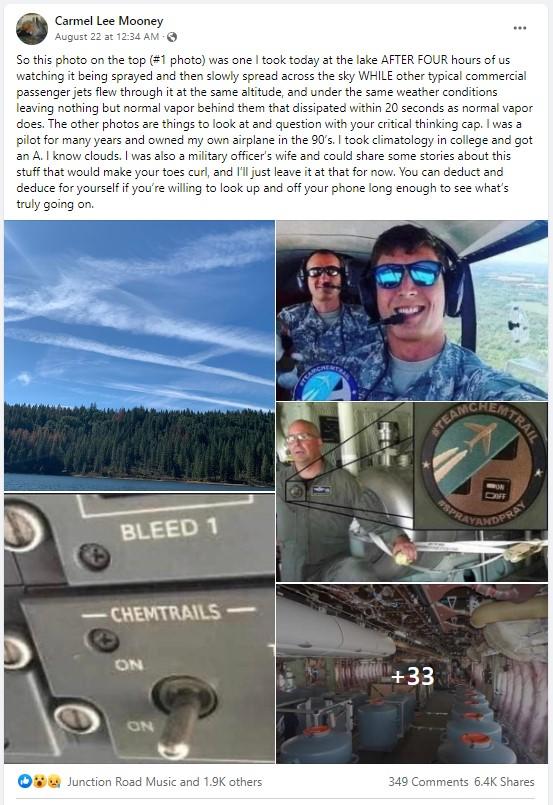 The photo (center right above) originated in a blog post about a visit to the Great New England Airshow on September 7, 2008. There are several photos of the C-130 airplanes and one photo of the interior of an aircraft. The author explains:

These guys are incredibly versatile and rugged. They're used for everything from troop transport, to cannon-bristling gunships, to in this case, pest control. This particular plane has been doing duty in the hurricane ravaged regions of Mississippi, Louisiana and Texas, keeping mosquito populations in check. They've been running back and forth along the southeast coast spraying for them until these big tanks were empty.

Below is a comparison of the original image in the blog (left) and the digitally altered photo posted on Facebook (right side). The person manipulating the photo swapped the patch worn by the Air Force Reserve Command master sergeant with a novelty #TEAMCHEMTRAIL patch and even included a fake enlargement detail to show what it purportedly says. On the left is an enlargement detail of the real patch from the original photo displayed under the patch of the Air Force Reserve Command. Over the years, the U.S. Air Force Reserve master sergeant in the photo has appeared in other photos connected to the 910th Operations Group based at Youngstown Air Reserve Station in Ohio and, as the blogger explained, the C-130s he worked with have flown missions spraying for mosquitos after hurricanes.

Lead Stories was not able to determine who was responsible for editing this photo. Just because the photo was altered to have a #TEAMCHEMTRAIL patch does not mean the edit was done by the people who made the novelty patches. The #TEAMCHEMTRAIL and #SPRAYANDPRAY hashtags are associated with a satirical website that is no longer online, teamchemtrail.com. The website and the merchandise page that once offered for sale actual patches and stickers bearing the hashtag can be viewed on archive.today. The about page explains:

ABOUT TEAMCHEMTRAIL
Welcome to the world of our Southern California Chemtrail operation! We are happy to present to you the official TeamChemtrail website where we work hard to bring forth some of the most entertaining pilot products you can find. Deep in the Chemworks we are constantly working hard to bring you new and improved ways of enlightening and scaring all conspiracy theorists.

Lead Stories has published several articles on a variety of specific claims about chemtrails and has identified the specialized equipment in other photos in this collection -- for example, ballast tanks and a drogue used to stabilize a long, trailing antenna -- as misrepresentations of proof of chemtrails.