The claim appeared in a Facebook post published by "Chicks On The Right" on August 31, 2022. Under the caption, "Not even making this up, y'all," the post linked to a story with the following headline:

You Wanna Buy Whipped Cream In NY? You Better Have ID. 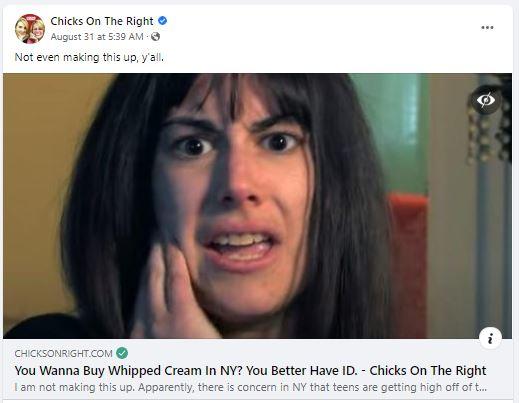 The "Chicks On The Right" story reported:

ANYWAY, because NY is run by lunatics, retailers there have to start enforcing a state law that bans the sale of whipped cream canisters to people younger than 21, which means that they have to CHECK IDs for people wanting to buy whipped cream.

To be fair, there was some confusion around what exactly the law meant and various news outlets reported that New York stores were carding, or planning to card, customers who wanted to buy whipped cream.

N.Y. State Sen. Joe Addabbo, who sponsored the law, responded to the confusion on Twitter, writing:

Recently, there have been questions raised about a state law based upon my bill S.2819A, which bans the sale of whipped cream chargers or cartridges to anyone under 21 years old. There has been a misinterpretation of the language and intent of the bill. My bill is not intended to prevent people under the age of 21 from buying whipped cream dispensers, but the small, individual charger or cartridge inside the whipped cream canisters that is the target of this law.

These two-inch steel cylinders contain the nitrous oxide that is dangerous when inhaled directly. They can be sold individually or in packs as refills to recharge whipped cream canisters. It is the individual charger or cartridge that is the sole target of the bill, which are accessible to younger residents and being used improperly to get the nitrous oxide high.

You can see a copy of Addabbo's post, along with photographs of the targeted chargers, below:

Clarification for the misinterpretation of the state law regarding the sale of whipped cream canisters, which should be allowed. pic.twitter.com/XpCwrIQyF9

Lead Stories reached out Kent Sopris, president of the New York Association of Convenience Stores, to ask about the post's claim. Although he'd initially read the law broadly, to include whipped cream cans, he no longer believes that's an accurate understanding. In an email, dated September 2, 2022, Sopris wrote:

After walking through the bill with the Senate sponsor who spoke with the AG [Attorney General] it's my understanding that the bill was to be interpreted narrowly to only include nitrous oxide cartridges. I have advised my members not to ID.

Lead Stories also reached out to the New York state attorney general's office to ask about the law. We will update this story, as appropriate, if we receive a response.