Was a letter "S" recently added to LGBTQIA to represent "satanism"? Do the brown and black stripes on the pride and trans flags represent an acknowledgment of stolen Native American land and Black Lives Matter? No, that's not true: The S does not stand for satanism. The S at the end of the acronym can be plural, as in "LGBTQIAs," or paired with the number 2, as seen in LGBTQIA2S+. 2S stands for "two-spirit," a cultural identity of some indigenous people that is sometimes written at the start or end of the acronym LGBTQIA (Lesbian, Gay, Bisexual, Transgender, Queer, Intersex, Asexual). The term "two-spirit" was adopted around 1990. The brown and black stripes were added to the rainbow flag to represent Black, Indigenous and People of Color in the LGBTQ community.

The claim about LGBTQIAS comes from an excerpt of episode 197 of the Liz Wheeler Show, which was posted on YouTube on September 9, 2022. Wheeler's official Instagram account posted this excerpt (found at 38:00 in episode 197) on September 13, 2022. The clip was captioned:

The LGBTQ+ community just added a new letter to their ongoing list, and you'll never believe what it stands for. 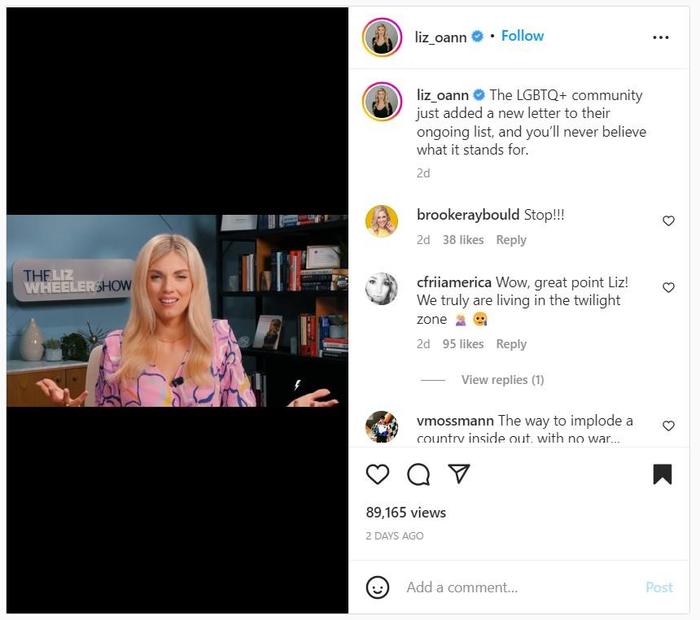 The short clip posted on Instagram begins with Wheeler saying:

Did you know that they recently added S to LGBTQIAS? Do you know what S stands for? Satanist. Now you might be thinking, 'Well why would they add "satanist" to LGBTQIA+?' Because part of the doctrine of the Church of Satan is to pursue instant gratification through sex in as hedonistic of a way as possible. You'll notice this thread especially in the promiscuous gay community of satanism.

This is not true. Only two days earlier, a September 7, 2022 tweet (archived here) by Kyle Becker, the chief executive officer and chief editor of Becker News, matched Wheeler's claim. Becker's tweet is the earliest instance of this claim that Lead Stories found:

By the way, the 'S' in LGBTQIAS+ stands for 'satanist'

In a glossary of gender and sexuality terms from Michigan State University Gender and Sexuality Campus Center (GSCC), one paragraph is dedicated to Unpacking the Acronym:

There are two different instances when the letter S appears in the LGBTQ or LGBTQIA acronym.

When coupled with the number 2, it represents the indigenous cultural identity known as two-spirit, a term which originated around 1990 in Winnipeg, Canada. The University of Toronto Dalla Lana School of Public Health defines two-spirit as "a person who identifies as having both a masculine and a feminine spirit, and is used by some Indigenous people to describe their sexual, gender and/or spiritual identity." (Two-spirit replaced the term "berdache," which is now generally considered offensive.)

A search of Google's trends explorer shows that people were looking up the term LGBTQIA2S as far back as the tool records, in 2004.

An S can also make a plural, as in LGBTQs or LGBTQIAs.

About one minute into the video posted on Instagram, Wheeler switches to discussing the colors on a "complilation" of transgender and pride flags. At the 1:23 mark, she says:

Again, Wheeler is wrong. The black and brown stripes do not represent a stolen land acknowledgment or Black Lives Matter. The stripes were first added to the rainbow flag in Philadelphia and debuted on June 8, 2017 as part of the #MoreColorMorePride campaign.

The black and brown stripes were added to the Pride flag specifically in Philadelphia to represent BIPOC in the LGBTQ community, giving them visibility. Because Philadelphia is a city that is predominantly BIPOC (65%, with 43% of the total population identifying as black) we felt it important that LGBTQ BIPOC be represented on the flag that the Mayor's Office in Philly uses officially, because they are a major part of the population here.
The More Color More Pride flag was however given open source so that anyone who was so moved by the addition of the stripes could reproduce it and fly it as well, and we are very proud of how much it has been adopted and shared internationally since it's introduction at the Philadelphia Pride Flag Raising event at our City Hall in June 2017.
The title name of the flag was its full intention, More Color, More Pride. And it was meant to be a unique and original flag for the LGBTQ community in Philadelphia, to show our commitment in the community to discussing how to be better allies and more inclusive of BIPOC in LGBTQ spaces.