Is the interior Earth actually hollow, with access points at the North and South Poles that lead to a mythical land that is home to superhumans and extraterrestrial beings with advanced technology? No, that's not true: Though treated as a scientific supposition in the 17th century, the so-called "hollow Earth theory" has been disproved through modern science; yet it remains a popular pseudoscientific belief peddled by conspiracy theorists.

"The Great Antarctica Conspiracy," a video that circulated on social media in September 2022, claimed U.S. government research discovered a portal to a secret civilization under Earth's surface in Antarctica. A teaser video was posted to Facebook by the account Psychopoly - which provides explainers and background videos about conspiracy theories - on August 26, 2022. The caption of the video read:

The account also provided a longer explainer that detailed the conspiracy theory on its YouTube page posted on May 28, 2022. (Psychopoly also claimed to find the "entrance" to the inner earth in this video.)

Here is a screenshot of the post as it appeared on Facebook at the time of writing: 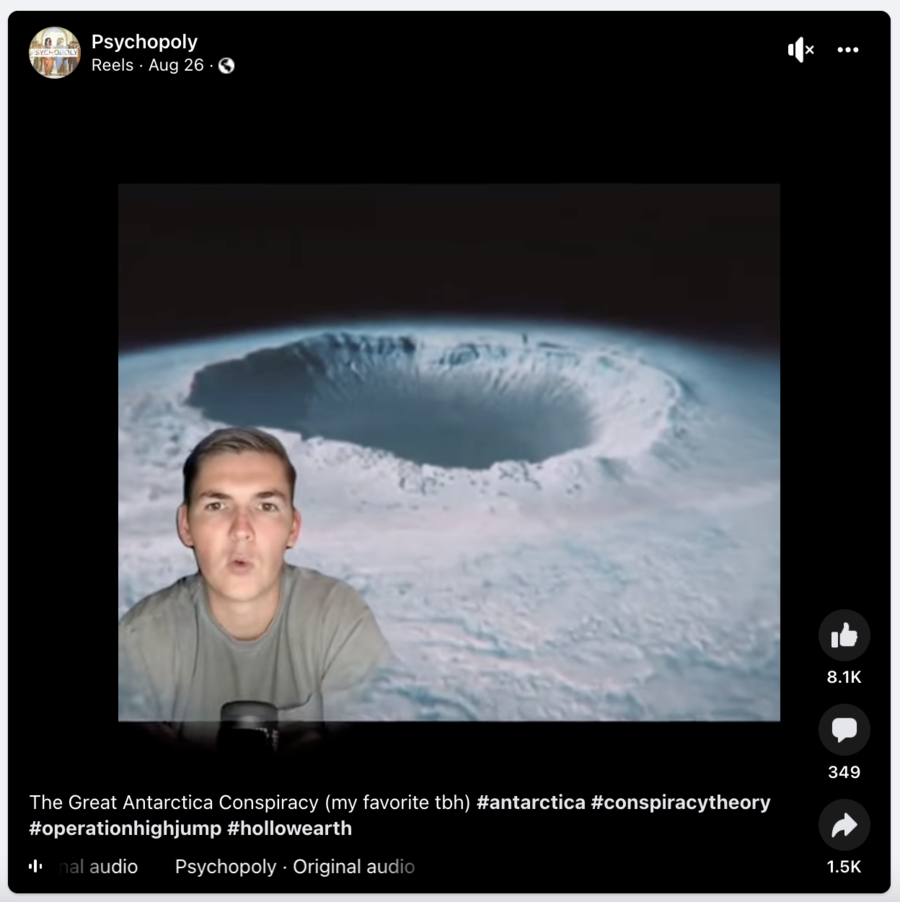 Iterations of this claim have circulated on social media for years, suggesting there is an entrance in Antarctica to a subterranean world or mythical land of forests inhabited by superhumans or extraterrestrials with technology. Others argue that this was the region that Adolf Hitler escaped to following WWII. These hypotheses are all false. Here's why.

Science Proves The Earth is Not Hollow

The Earth is made up of three main layers: the crust (the outermost layer that is rigid and thin), a dense, hot layer of semi-solid rock known as the mantle, and the core. The core is metallic in composition and is twice as dense as the mantle and is made up of a liquid outer core and solid inner core, notes the U.S. Geological Survey. This internal structure, consistent with scientific concensus about physics and geology, creates Earth's magnetic field and influences plate tectonics.

Hollow Earth believers argue that the government is hiding access to and information about the poles because they are the entrance points to the inner Earth. This is easily refutable -- people are able to visit both the North and South poles, do so and have filed on credible reports of a portal to inner Earth. The North Pole is located in the middle of the Arctic Ocean and is most often accessible in June and July, whereas the South Pole sits in Antarctica. NASA has published images of both the Arctic Circle and Antarctica - neither of which shows a gaping hole leading to the center of the Earth:

(Left) A 2012 composite image shows the Arctic and high latitudes surrounding the North Pole. NASA (Right) An image captured in 2009 features the snow and ice-covered continent of Antarctica. NASA

Lead Stories spoke with Callan Bentley, an associate professor at Piedmont Virginia Community College in Charlottesville, Virginia. Bentley manages the American Geophysical Union's Mountain Beltway Blog and has expertise in geology. First and foremost, Bentley pointed out that the opinion that Earth is hollow is not a legitimate theory and should not be referred to as such:

In science, a theory is a well-corroborated explanation of a suite of phenomena. It's a hypothesis that is 'umbrella-like' in explanatory power - broad rather than specific, and - crucially - validated by repeated attempts to falsify it. Atomic theory meets that definition. Plate tectonics does too, and evolution by means of natural selection, but not this crackpot hollow Earth scheme.

Below, we explore why arguments made in the longer explainer video posted by Psychopoly don't hold up under the scrutiny of science.

Debunking an "Ocean" Below Earth's Surface

A major flaw in the argument presented by Psychopoly was a misrepresentation of water's presence in the middle layer of the planet, the mantle, as an "ocean," referencing a 2014 study reported by The Guardian. The study looked at the planet's mantle, seismic (acoustic) waves, and demonstrated the middle layer transmits seismic waves like denser rock, not like water, which is less dense.

"The inference that there is water present among the mineral grains is not the same as saying there's a big pocket down there full of ocean water (but lacking ultradense rock)," said Bentley.

The Psychopoly video attempted to explain Earth's magnetic field by using Halley's "three rotating spheres, each with its own magnetic field" notion.

But experts in the field agree metals within Earth's interior produce their own electrical currents, which generate a self-sustaining magnetic field. As the USGS writes:

The Earth's outer core is in a state of turbulent convection as the result of radioactive heating and chemical differentiation. This sets up a process that is a bit like a naturally occurring electrical generator, where the convective kinetic energy is converted to electrical and magnetic energy. Basically, the motion of the electrically conducting iron in the presence of the Earth's magnetic field induces electric currents. Those electric currents generate their own magnetic field, and as the result of this internal feedback, the process is self-sustaining so long as there is an energy source sufficient to maintain convection.

These internal currents influence Earth's magnetosphere, a "comet-shaped bubble" that has helped the planet become habitable for life. NASA explains:

Our magnetosphere is part of a dynamic, interconnected system that responds to solar, planetary, and interstellar conditions - and it all starts deep inside Earth. As electrically charged, molten iron churns far below Earth's surface, within the planet's outer core, it generates a magnetic field large enough to extend far out into space.

"I think rather than peering into the core and seeing 'aliens or Germans or a tiny Sun,' it's most likely we'd see a lot of hot iron and nickel," said Bentley.

Earth is surrounded by a system of magnetic fields, called the magnetosphere. The magnetosphere shields the planet from harmful solar and cosmic particle radiation. NASA

Further evidence comes in the form of dramatic dancing lights in the sky known as the aurora borealis, or the northern lights. They are influenced by magnetic fields -- not gases escaping from the inner Earth as is proposed by hollow Earth believers. In short, the European Space Agency (ESA) explains that particles channeled along Earth's magnetic fields produce colorful displays when they strike atoms in the atmosphere.

"The interaction with oxygen atoms results in a green or, more rarely, red glow in the night sky, while nitrogen atoms yield blue and purple colours," wrote the agency.

To characterize the interior Earth, researchers began drilling the deepest hole on Earth on the Kola Peninsula in 1970. After nearly two decades of drilling, the drill became stuck in rock at about 8 miles deep, notes Union University in Tennessee. In 2022, seismic waves are more effective ways to study what lies below the surface.

"The passage of seismic waves (compressive and shearing waves colloquially known as P waves and S waves) from earthquakes and nuclear explosions can be detected on the other side of the planet, and their presence or absence allows us to map out the interior structure of the planet," said Bentley.

According to the USGS, two types of waves are generated by earthquakes and travel through rock: P (compressional waves) and S (shear) waves. Both waves travel outward from where an earthquake strikes and are measured by seismographs. The speed at which either wave travels clues scientists into the magnitude of the earthquake, as well as the conditions below the surface of the Earth. Bentley said:

For instance, the outer core must be liquid because S waves do not pass through it (it is impossible to shear a liquid, and S waves are shear waves). Similarly, the fact that the S waves do pass through the mantle shows it must be solid. If there were pockets of air there (or water), the S waves would be stopped cold. Furthermore, where P and S waves are detectable on the hemisphere opposite the wave source shows the size of the core.

Any proposed voids present between the layers of the Earth would be detected with seismic waves. Seismology, said Bentley, is a way to essentially "x-ray" the planet, and it has shown time and again that the interior of the Earth is solid material.

The layers of the Earth are made up of different metallic and mineral components. USGS