Do the photos in a recent TikTok video prove that "everything" in Antarctica is "turning red"? No, that's not true: The three compiled images seen in the TikTok video show three different locations in Antarctica. In one, taken on Galindez Island, the red coloring on the glaciers is caused by carotenoids in algae appearing more often due to rising temperatures from climate change. In another, at Blood Falls in Antarctica's McMurdo Dry Valleys, the red color is caused by oxidized iron from salt water and the rust it produces. The last image is of an iceberg in the Lemaire Channel in Antarctica taken during a red-looking sunset.

The photos appeared in a TikTok post on July 19, 2022. A man looks back at the images stacked on top of one another. The text in front of these images and the video of the man reads:

WHAT IN THE WORLD IS HAPPENING IN ANTARCTICA..EVERYTHING IS TURNING RED 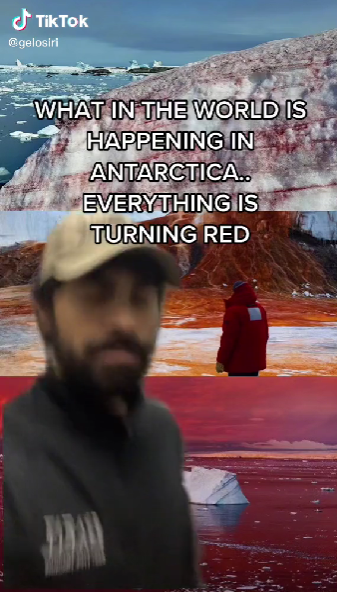 A Google search using the keywords "Is everything in Antarctica Turning Red?" revealed a June 9, 2021 China Global Television Network article titled "Why is the snow in Antarctica turning blood red?", which explains that some locations in Antarctica look like they're "bleeding to death":

The phenomenon, observed by scientists at Ukraine's Vernadsky Research Base, is said to be an indication of global warming. It's caused by algae, which changes from green to scarlet as temperatures rise.

The first photo was taken by the Ukrainian polar explorers at the Antarctic station. It was published in this February 24, 2020 Facebook post.

The middle image was taken from this February 12, 2020 episode, titled "Why is this Antarctic Glacier 'Bleeding?,'" from the PBS series NOVA. The people in the TikTok post are wearing the exact clothing as in the NOVA video. The "bleeding glacier," actually named Blood Falls, is in Antarctica's McMurdo Dry Valleys.

The scientists, at 4:14 in the PBS video, say the color is caused by "iron oxides." When the salt water around the glacier hits the surface of the snow, ultimately oxidizing it, the red color is left behind. The red crust on the glacier is rust. 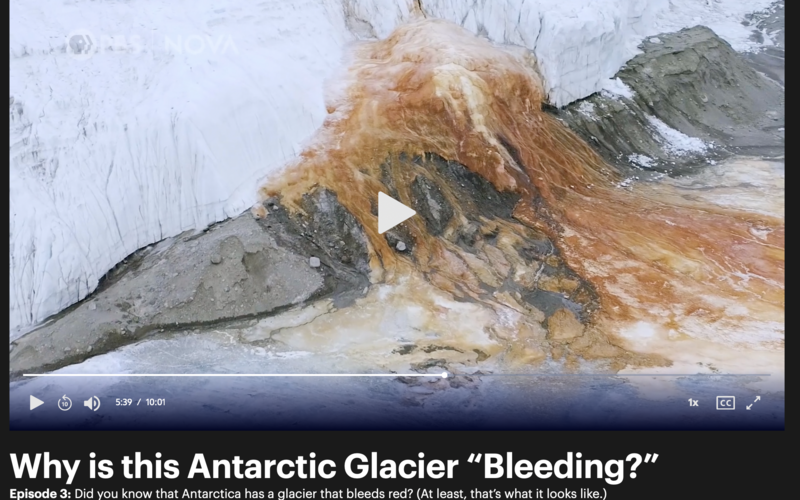 The bottom image is on the Susan Spiritus Gallery website. It was taken by Camille Seaman, a Native American and African American photographer who titled the photo "Lemaire Sunset 2017." The photo's description reads, "Iceberg in Blood Red Sea, Lemaire Channel, Antarctica." 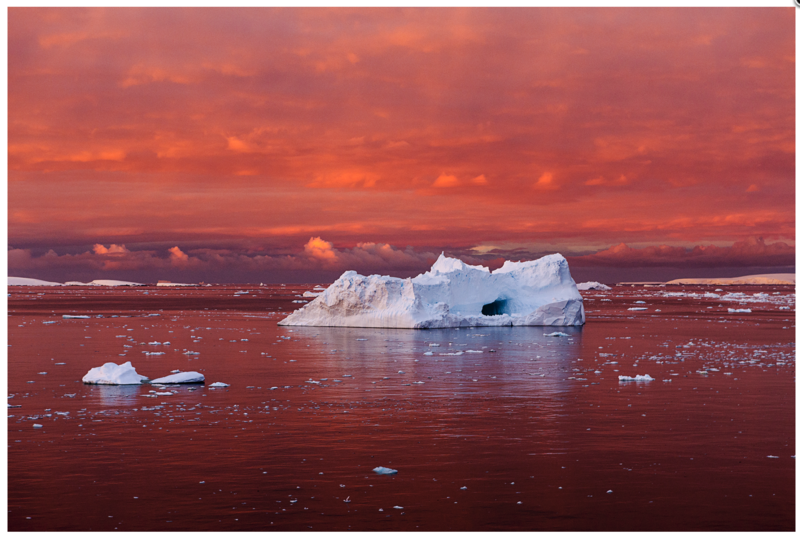 Lead Stories reached out to the McMurdo Station at the National Science Foundation for a statement on the validity of this claim and will update this story if a response is received.