Did Queen Elizabeth II make it known that she does not wish any of her dogs to go on living in the event of her death? No, that's not true: Suggestions that the queen wanted all surviving dogs euthanized at the time of her death are satirical.

A 2015 article on vanityfair.com included anecdotes from horse trainer Monty Roberts about the queen's corgis and his namesake Monty, who died in 2012. At the time, he recalled, "She didn't want to leave any young dog behind. She wanted to put an end to it." Roberts was referring to breeding more dogs.

Roberts' account has been quoted many times, and appears in a screenshot from the Wikipedia entry on the royal corgis in a satirical tweet (archived here) by Ashley Feinberg on September 8, 2022. The tweet reads:

friend of the queen, Monty Roberts. It was reported in July 2015 that the Queen has stopped breeding corgis as she does not wish any to survive her in the event of her death. Monty Roberts had urged Elizabeth to breed more corgis in 2012 but she had told him that she 'didn't want to leave any young dog behind' and

It can be assumed that this tweet is intended to be satirical, but some people were not so sure. Feinberg's tweet was mentioned in an article in mediaite.com:

It's tough to pinpoint where the joke got started, but on Thursday morning, journalist Ashley Feinberg tweeted a screenshot of the Royal Corgis Wikipedia entry that read 'It was reported in July 2015 that the Queen has stopped breeding corgis as she does not wish any to survive her in the event of her death. Monty Roberts had urged Elizabeth to breed more corgis in 2012 but she had told him that she 'didn't want to leave any young dog behind" and wanted to put an end to the practice.'

A prank headline on reductress.com reads:

Cute! Queen Elizabeth's Corgis Prepare to Be Buried Alive With Her

The queen did enjoy the company of her pets for another decade. At the time of her death there were at least four dogs: Candy, Muick, Sandy, and one champion field-trial cocker spaniel, Wolferton Drama, known as "Lissy."

This year, Lissy became the first of the queen's dogs to win a gundog championship, the 91st Kennel Club Cocker Spaniel Championship, held in early January 2022.

Plans for the future care of these royal dogs have not been made public, but both family members and staff know the dogs and their routine.

Before his death in September 2012, the corgi Monty had become famous on the world stage, appearing in a bit with the queen and Daniel Craig as James Bond for the London 2012 Olympics.

An article in newsweek.com, entitled "What Happens to the Queen's Beloved Dogs Now?", speculated on some of the options that could be available, but no plans have been made public. Royal biographer Ingrid Seward thought the dogs might go to the queen's children, while author Penny Junor, who wrote the book "All The Queen's Corgis," thought staff may continue to care for them:

Care of the dogs has fallen sometimes to footmen but mostly to the Queen's trusted dressmaker, assistant and right-hand woman, Angela Kelly; and to her equally trusted page of many years standing, Paul Whybrew, who was seen walking with the Queen and the dogs in the James Bond spoof.

On September 8, 2022, photographer Annie Leibovitz posted a portrait on Twitter showing the queen and four dogs at Windsor Castle from April 2016: 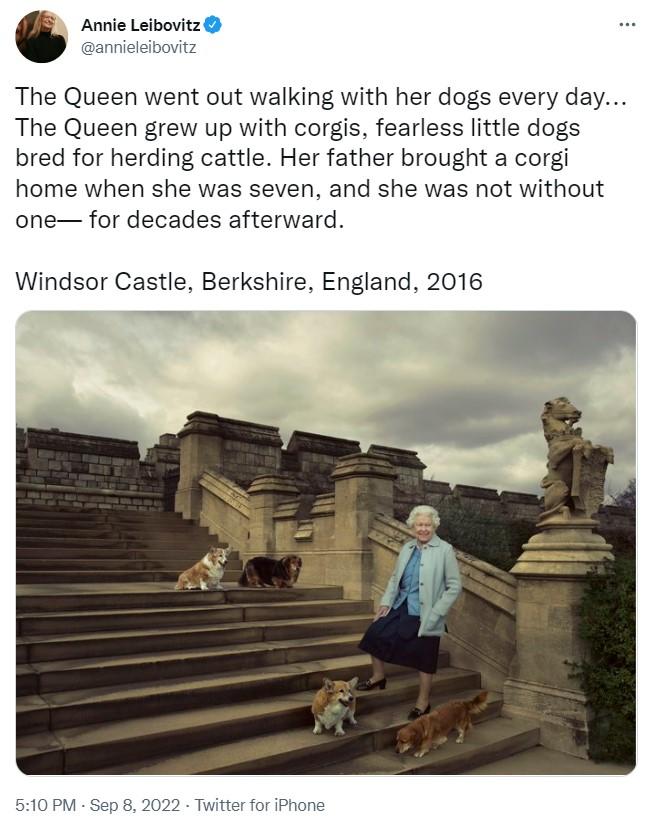