Does a Boston University (BU) study of a COVID-19 strain with an "80% lethality" have implications for humans? No, that's not true: The kill rate refers to mice used in the lab tests, and BU's manipulated virus was less lethal than existing wild viruses, which showed a kill rate of 100 percent.

The experiment conducted at BU manipulated the SARS-CoV-2 omicron virus variant and tested it against two other strains to determine what mechanisms made omicron more infectious. The various forms of COVID were compared through testing on tissue and mouse models -- not humans. Experts say such studies are common in defining the characteristics of a virus.

The claim emerged in an article published on October 17, 2022, by The Daily Mail, and then other media including Fox News, that claimed researchers at BU "created a new deadly Covid strain with an 80% kill rate." Here is how the Daily Mail post read at the time of this writing:

EXCLUSIVE: 'This is playing with fire - it could spark a lab-generated pandemic': Experts slam Boston lab where scientists have created a new deadly Covid strain with an 80% kill rate 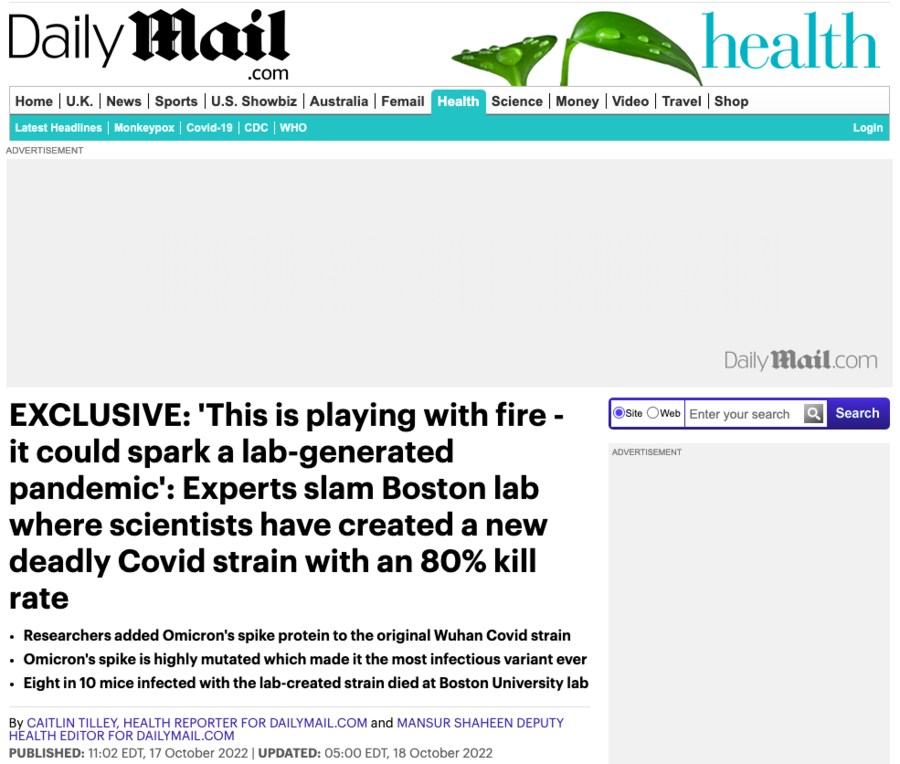 Editors' note: Following the publication of this Lead Stories fact check, The Daily Mail updated their original article (archived here) to note that the study was conducted in mice and that the chimera virus was found to be less deadly than the wild-type strain. Below is a side-by-side comparison of the original article on October 17, 2022 (left), and the updated article on October 23, 2022 (right).

Research using live and highly infectious viruses can theoretically start a pandemic if safety equipment and practices fail. BU's research was correctly carried out in a lab with the greatest safety level, Level 4, and critics have not documented any failures in the facility nor in the conduct of the study. The issue critics have raised is whether BU correctly interpreted federal rules on notification to the National Institutes of Health (NIH) and local rules of the same nature.

The Daily Mail article claimed that the research team "made a hybrid virus - combining Omicron and the original Wuhan strain - that killed 80 per cent of mice in a study." While this is technically true, the study is not applicable to humans and was conducted in the Level 4 BU lab. Furthermore, this type of research is common in determining what elements make a virus infectious or cause severe infection.

In a public statement, BU researchers said that the Daily Mail reporting was "false and inaccurate" and that "this research made the virus replicate less dangerous." The study is published in the pre-print server bioRxiv. It has not yet been peer-reviewed in a scientific journal. Scientists often publish early findings in pre-print servers to seek input and speed the development of new research methodologies, particularly throughout the course of the COVID pandemic.

Study author Ronald B. Corley, microbiologist and director of the BU National Emerging Infectious Diseases Laboratory (NEIDL), said that the Daily Mail pulled one line of the paper's abstract out of context: "deadly Covid strain with an 80 percent kill rate."

Even so, the study sparked concern in the scientific community over whether the BU team received the necessary approvals to conduct the research in the first place.

A chimera virus to determine pathogenicity

To determine how omicron, a coronavirus strain that first appeared in 2021, is able to evade immunity, scientists at NEIDL created a chimera virus by extracting omicron's spike (S) protein. The spike protein is the structure that allows the virus to invade human cells, making coronavirus particularly infectious. Researchers attached the S protein to the original wildtype strain to determine if that increased the original virus' ability to infect mice. This chimera virus was then compared against the unaltered original wild variant. The chimera was shown to cause 80 percent fatality (8/10) in mice, which is less than the 100 percent mortality (6/6) caused by the wild variant.

These findings signaled that "while the spike protein is responsible for infectivity, changes to other parts of [the virus'] structure determine its deadliness." In other words, the spike protein is not the primary determinant of omicron's viral pathogenicity, or what the National Library of Medicine (NLM) describes as "the process by which an infection leads to disease." BU's approach was only tested on mice.

"Consistent with studies published by others, this work shows that it is not the spike protein that drives Omicron pathogenicity, but instead other viral proteins. Determination of those proteins will lead to better diagnostics and disease management strategies," lead author Mohsan Saeed said in a statement emailed to Lead Stories on October 19, 2022.

Did the study receive the necessary approvals before being conducted?

The Boston University Institutional Biosafety committee, Boston Biosafety Committee and Boston Public Health Commission (BPHC) approved this research protocol in March 2020 after full review of the proposed research and under the condition that the lab follow all applicable safety controls, including CDC guidelines for handling COVID-19 and those imposed by the Boston Biological Laboratory Regulations to protect public health and safety. BPHC is in the process of reviewing all application materials related this study to confirm that the research was conducted in conformity with protocols, and that they were properly overseen.

The study was conducted in BSL-3 and BSL-4 level labs, which the Department of Health and Human Services (HHS) considers to be the two highest security levels. But the work was not reviewed by the NIH. In a statement emailed to Lead Stories on October 18, 2022, the NIH's National Institute of Allergy and Infectious Diseases, which oversees the nation's COVID response, did not fault BU's permission process, but said it is reviewing if BU needed NIH approval:

The National Institute of Allergy and Infectious Diseases (NIAID), part of the National Institutes of Health, did not review nor issue awards for experiments described in a pre-print article on SARS-CoV-2 research at Boston University's National Emerging Infectious Diseases Laboratories (NEIDL). NIH is examining the matter to determine whether the research conducted was subject to the NIH Grants Policy Statement or met the criteria for review under the HHS Framework for Guiding Funding Decisions about Proposed Research Involving Enhanced Potential Pandemic Pathogens (HHS P3CO framework). More information about the history of oversight on research involving enhanced potential pandemic pathogens is available in this fact sheet.

The Daily Mail article also claimed that the study should have been flagged as gain of function (GOF) research, which the NLM describes as studies that involve the gain or loss of a function to "understand the genetic makeup of viruses and the specifics of virus-host interaction." This is done by manipulating parts of a virus to determine whether that change allows a pathogen to either gain or lose a function, such as its ability to replicate or invade cells. Such studies are "fundamental to understanding the biology, ecology, and pathogenesis of viruses."

BU researchers refuted such claims and contend that their research was not considered GOF. In an email sent to Lead Stories on October 18, 2022, BU said:

We want to address the false and inaccurate reporting about Boston University COVID-19 research, which appeared today in the Daily Mail. First, this research is not gain-of-function research, meaning it did not amplify the Washington state SARS-CoV-2 virus strain or make it more dangerous. In fact, this research made the virus replicate less dangerous.

However, Dr. Marc Lipsitch, an epidemiology professor (not a virologist) at Harvard School of Public Health, opined in a Twitter feed on October 18, 2022 (archived here), that the experiment was "absolutely" a gain of function experiment, though it is "probably not the most dangerous kind of GOF study":

First, these are unquestionably gain-of-function experiments. As many have noted, this is a very broad term encompassing many harmless and some potentially dangerous experiments. GOF is a scientific technique, not an epithet. The wildtype 'backbone' virus gains immune escape... from the insertion of the Omicron spike, in ways that the paper describes in detail. That is gain-of-function.

But Lipsitch also said this type of experiment is not uncommon and does have scientific value:

... Understanding which changes have which phenotypic consequences is valuable for science. This is a classic microbial genetics study to do that, and appears to do so convincingly, though virology is not my field and others may find problems.

Florian Krammer, a virologist and professor at the Department of Microbiology at Icahn School of Medicine at Mount Sinai, also took to Twitter (archived here) to address the "robust" research, noting that these types of experiments "need to be done in appropriate biosafety laboratories" and with permission granted from the U.S. government "and that is what was not done here."

"That's why the...the group got in trouble. Not because of the experiment itself, no, because they did not ask for permission," tweeted Krammer. He added:

Regulations are not easily accessible even for experts in the field. This is not in the media because its dangerous research, this is in the media because somebody did not ask for permission... likely because they thought there is no need for it. Which brings us back to overly complicated regulations. Having said all that, I absolutely think GOF research should be tightly regulated and controlled.

BU contends that the study was not considered to be GOF and as such, the team received the necessary permissions. In a statement sent to Lead Stories on October 19, 2022 (which can also be found in part here), the researchers said:

We want to address the false and inaccurate reporting about Boston University COVID-19 research, which first appeared in the Daily Mail. First, this research is not gain-of-function research, meaning it did not amplify the Washington state SARS-COV-2 virus strain or make it more dangerous. In fact, this research made the virus replicate less dangerous. Secondly, the research was reviewed and approved by the Institutional Biosafety Committee (IBC), which consists of scientists as well as local community members. The Boston Public Health Commission also approved the research. Furthermore, this research mirrors and reinforces the findings of other, similar research performed by other organizations, including the FDA. Ultimately, this research will provide a public benefit by leading to better, targeted therapeutic interventions to help fight against future pandemics.

Lead author Mohsan Saeed says "Consistent with studies published by others, this work shows that it is not the spike protein that drives Omicron pathogenicity, but instead other viral proteins. Determination of those proteins will lead to better diagnostics and disease management strategies."

We fulfilled all required regulatory obligations and protocols. Following NIAID's guidelines and protocols, we did not have an obligation to disclose this research for two reasons. The experiments reported in this manuscript were carried out with funds from Boston University. NIAID funding was acknowledged because it was used to help develop the tools and platforms that were used in this research; they did not fund this research directly. NIH funding was also acknowledged for a shared instrumentation grant that helped support the pathology studies. We believe that funding streams for tools do not require an obligation to report.

Secondly, there was no gain of function with this research. If at any point there was evidence that the research was gaining function, under both NIAID and our own protocols we would immediately stop and report. All research at Boston University, whether funded by NIAID or not, follows this same protocol.

We are in continued conversation with NIAID leadership and program officers.

Lead Stories sent follow-up questions to BPHC for clarification on whether the agency considered the study to involve gain of function changes to viruses and will revise this article as appropriate when BPHC responds.