Does the potassium in a banana react with the aluminum of a license plate so that somehow traffic cameras cannot record the numbers on the plate, but only see a glare? No, that's not true: The effect shown is not the result of a chemical reaction -- this video is a joke aimed at "someone who deserves traffic tickets" that was made with post-production editing. On the video creator's channel on TikTok, the caption cited "Trust me bro" as a source, and it was tagged #satire.

The video was first posted on TikTok by @not_an_undercover_cop, an account that posts law enforcement-themed satire. The account heading proclaims "YOUR FAVORITE NOT AN UNDERCOVER COP Voted 'Most Trustworthy Creator' on TikToK." Originally the video's hashtags did not contain the #satire tag, but it was marked #satire the next time it was posted with a new caption. The video surfaced on Instagram on October 24, 2022. The Instagram post was not captioned. The text in the video reads:

The police don't want you to know this.
The potassium reacts with the aluminum.
Traffic cameras only see glare 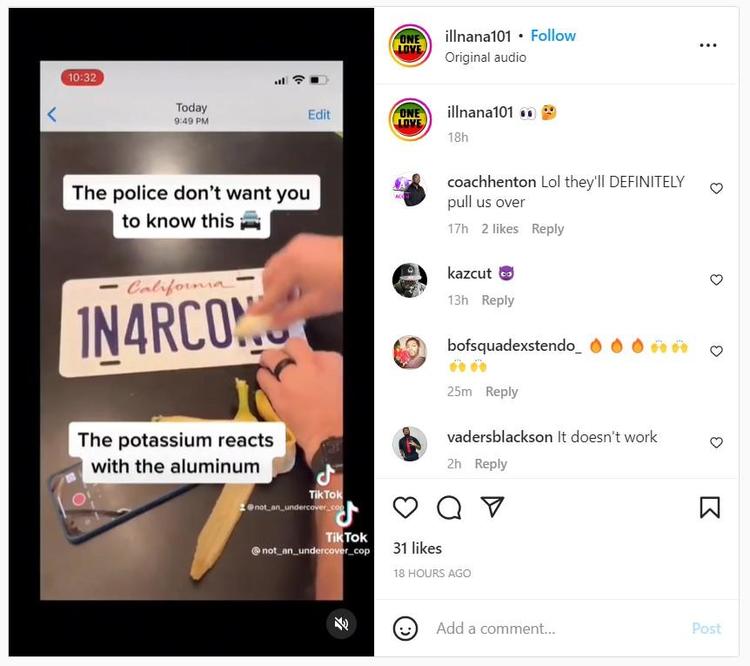 Source: trust me bro. Start smearing bananas on your license plates if you're someone who deserves traffic tickets! #tipsandtricks #lifehack #bananas #trafficticket #policesecrets #satire Do this one a week if you want to get away with speeding, running red lights, not paying for toll roads, etc. How to get out of a traffic ticket. How to get avoid a speeding ticket.

The custom California license plate reads, "1N4RCONU." This could be decoded to say, "I NARC ON YOU"

An additional satirical detail occurs at the 15-second mark, when a phone notification pops up, interrupting the screen recording. It reads:

Dunkin'
Welcome to the Dunkin' Gold Membership! Use 951275 to verify your gold account.

This video contains many layers of production, designed to be experienced as a screen recording of a video that has already been posted on TikTok. The phone's camera is used to demonstrate the before and after of the banana treatment, to enable the viewer to see the plates as a traffic camera would.

Because the phone in the video is turned sideways, the display of the video controls is also tipped. Below is an example of how the iPhone display appears when turned to the landscape position. The red dot on the left is the record button. To the right of the record button are the words to select various photo and video modes. To the right of those are three gray circles that are the selectors for the phone's cameras. 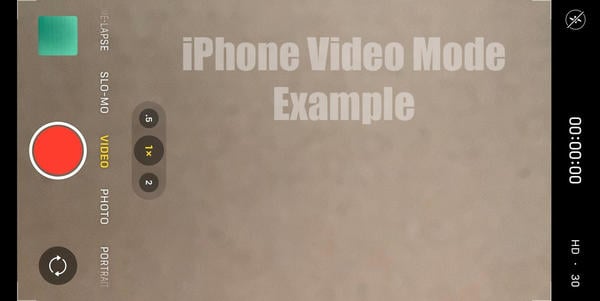 Below is a Lead Stories composite image showing screenshots of the 0:02 and 0:18 mark, illustrating the before and after the banana treatment. Each includes an enlarged detail of the phone's video mode display.

In the before image on the left, the screen display controls are visible. In the after photo the controls to the right of the record button are not visible. The "glare" has been faked. The same post-production editing tool that covered the license plate numbers with white also covered the display controls with white. In the last seconds of the video, it is also possible to see the plate's numbers showing under the red record button. 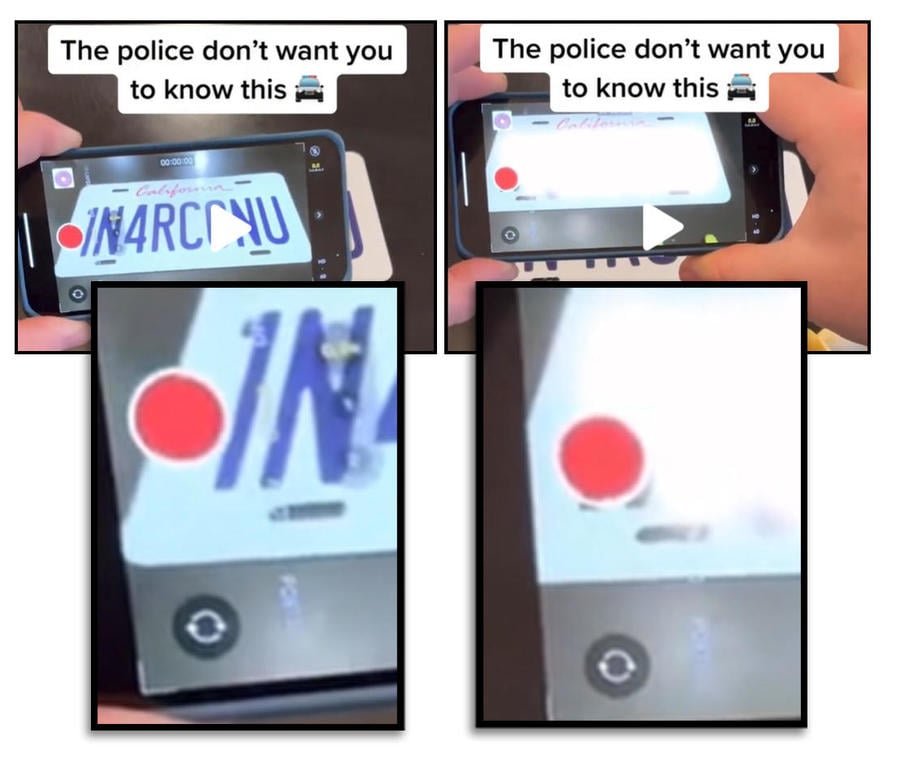