Is it true that airplanes fly "straight and level" and that this proves the Earth is flat? No, that's not true: An aviation expert told Lead Stories that "airlines don't fly in a literal straight line" because airplanes fly based on altitude, measured from sea levels. The expression "straight and level" refers to maintaining steady altitude so that the plane traverses an arc. It does not indicate that the Earth is flat, a theory disproved by scientists centuries ago.

The claim about airplanes' flight paths appeared in a video in an October 17, 2022, post on Instagram, with the caption:

A label on the video reads "FLATEARTH TRUTH." An unidentified male narrator, who claims to be a helicopter pilot and who says he has studied physics, says:

I woke up to the truth of the flat Earth, the shape of the earth, as an engineer and a pilot ...Airplanes fly straight and level. That's even an aviation term: straight and level. Airplanes will fly for hours at the same altitude never dipping their nose down to follow the curvature of the Earth. 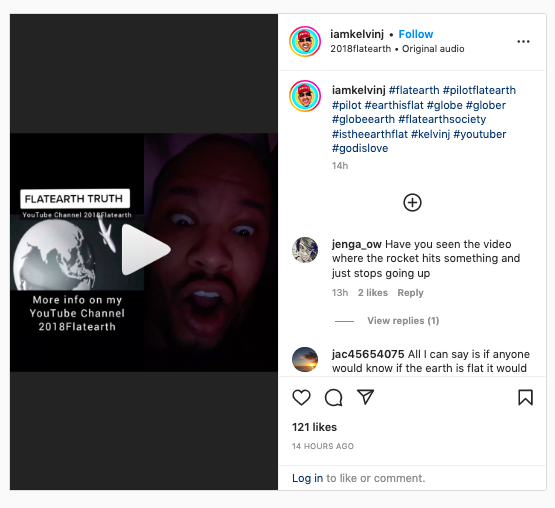 Lead Stories reached out to aviation experts for their responses to the claim.
In a phone call to Lead Stories on October 24, 2022, Dan Hargrove, a 21-year veteran Air Force pilot and director of the aviation program at Montanta's Rocky Mountain College, refuted the video's claims. Since airplanes "maintain altitude based on air pressure" and air pressure varies with altitude, "airplanes don't fly in a literal straight line," said Hargrove, who formerly commanded White House flights from Andrews Air Force Base.

If you stood on the moon and looked at the Earth and watched an airplane flying for about an hour, you would see the airplane is flying in a curved path, because it is maintaining the same altitude measured from sea level.

One aerospace hardware manufacturer, Monroe Aerospace, advised doubters to "take a look at the flight map" the next time they fly. Planes travel in an arc, rather than a straight line, "because Earth is three dimensional and maps are two dimensional," it noted in an August 20, 2018 blog post.

If you made a straight line between two locations, such as New York City and Paris, on a spherical, three-dimensional globe and then flattened [the] globe into a two-dimensional map, the once-straight route would then be an arc.

Nothing about this flight practice suggests that the Earth is flat. As Michael Marshall, project director of the Good Thinking Society, a British non-profit that combats "pseudoscience," wrote in an October 18, 2022, email to Lead Stories, "Airplanes don't need to 'adjust' to the Earth's curvature."

In the last several years, YouTube videos and other social media asserting that the Earth is flat have proliferated. Celebrity science explainer Bill Nye and astrophysicist Paul Sutter asserted in a 2020 interview and 2022 commentary, respectively, for Space.com that the false claims feed into a network of other non-fact-based theories.

From lunar eclipses to ships appearing to sink beneath the horizon as they sail away, the United Kingdom's Wonderdrome planetarium lists a variety of ordinary ways to understand that the Earth is not flat. The last way might be the most approachable:

7. Common sense. The stars and planets that we observe are all round. So why should our planet be any different?

Other Lead Stories fact checks on "flat Earth" claims can be found here.