Was World Economic Forum Executive Chairman Klaus Schwab caught planning a "mass extinction event"? No, that's not true: The article and video that said so did not discuss the actions or words of Schwab, founder of the World Economic Forum (WEF), or anyone from the WEF's board of trustees. The allegedly "leaked" video in the claim presented as proof of Schwab's intentions turned out to be two old interviews with individuals who spoke at WEF events, but whose words were taken out of context.

It opened with a statement about a supposedly "leaked video," which was embedded in the article:

Another week, another leaked video from the World Economic Forum featuring Klaus Schwab's advisors casually discussing their plans to depopulate the planet.

According to these two WEF stooges, all religious groups are opposed to the World Economic Forum because religions want "more souls" and the WEF "wants less on the planet."

At what point do we stop and say "enough"? How many times does the World Economic Forum have to declare their sinister intentions before the world stops and listens? 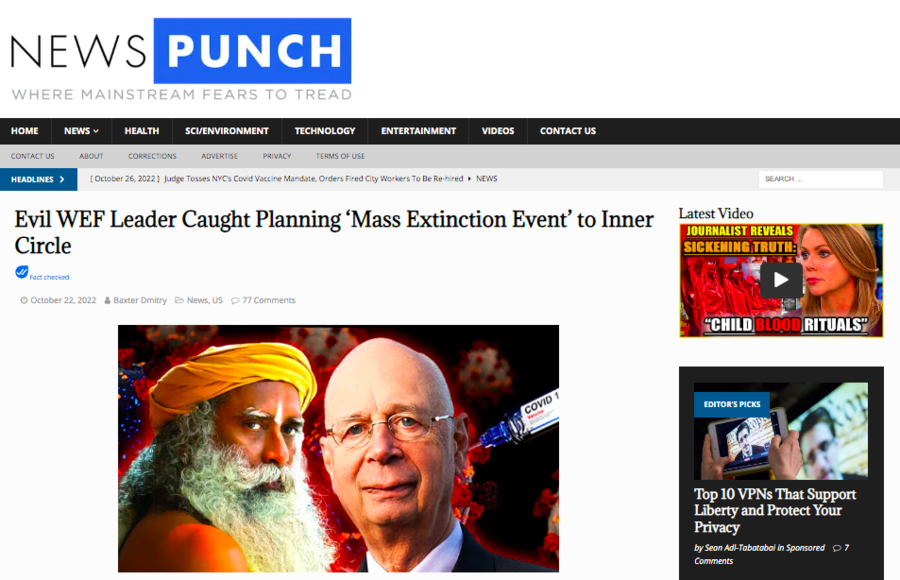 The men described by the article as "two WEF stooges" were an Indian guru, Sadhguru; and Yuval Noah Harari, a history professor at the Hebrew University of Jerusalem. Neither the article, nor the embedded video contained recordings of either man that had not been publicly available before the publication of the NewsPunch piece.

The embedded video, a Rumble clip also published on October 22, 2022, contained a short fragment of an interview with Sadhguru, the founder of an organization called the Isha Foundation, which describes itself as a "nonprofit spiritual organisation" founded in India in 1992. According to the BBC, he also is the leader of "a global campaign called SaveSoil, which pushes to improve soil health around the world."

In the video, Sadhguru states that:

All the religious groups are against me because I'm talking about population. They want more souls. I want less on the planet.

Contrary to the article's claim of a leak, the interview was recorded in public at the WEF's 2019 India Economic Summit by Circle of Blue, a nonprofit media outlet that covers water issues.

Circle of Blue's full recording of the interview shows that the NewsPunch article and embedded video took Sadhguru's words out of context. He was not discussing a plot of a "mass extinction event." Instead, he talked about the dangers to humanity if humans do not behave more responsibly toward natural resources such as water and forests.

Contrary to the claim, Sadhguru was not talking on behalf of the World Economic Forum or its founder. He is not listed on the board of trustees that oversees the Forum's work.

Yuval Noah Harari, referred to as "Klaus Schwab's right hand," is the second person mentioned in both the article and the video. While Harari indeed spoke at the World Economic Forum in 2020, he also is not a Forum trustee. Harari is an Israeli-born historian, philosopher and published author, who lectures on history at the Hebrew University of Jerusalem.

As supposed proof of Harari's advice on a "mass extinction event," NewsPunch used a fragment from his August 9, 2022 discussion on "The TED Interview," a series of podcasts by the non-profit TED Talks organization.

During that interview, the Israeli scholar, known for considering how the present may cause unsettling future scenarios, gave an overview of how economic changes in the past had been people-dependent.

And now fast forward to the early 21st century when we just don't need the vast
majority of the population. Because the future is about developing more and more sophisticated technology, like an artificial intelligence, bioengineering. Most people don't contribute anything to that except, perhaps, for the data. And whatever people are still doing, which is useful, these technologies increasingly will make it redundant and will make it possible to replace the people.

Eliminating that possibility would require intensive retraining, which may be difficult for the average person, he added.

Harari's remarks were in response to a question about what he thought had led to the collapse of liberalism -- in other words, respect for divergent views and civil rights -- in the 20th century. The full interview can be heard here.

The NewsPunch article, however, does not provide the full context of Harari's comments.

NewsPunch (formerly YourNewsWire) has published several hoaxes and fake news articles in the past so anything they write or publish should be taken with a large grain of salt. Their Facebook page "The People's Voice" even lost its verification checkmark according to a 2018 report from Media Matters For America.

The site was profiled in The Hollywood Reporter in 2017 where it was described as:

A while ago we reported that YourNewsWire had rebranded itself as NewsPunch by changing its domain name in an apparent effort to evade filtering/blocking.

Other Lead Stories fact checks about depopulation claims are here.