Does a social media video show a U.S. patent for harvesting adrenochrome from humans? No, that's not true: 3M, the holder of the patent shown, #4,501,923, told Lead Stories that the license "does not describe or suggest harvesting adrenochrome from a human," but, instead, "describes making adrenochrome in four different ways ..." Adrenochrome is a chemical compound that's a byproduct of adrenaline. It's a hemostatic agent used to slow blood loss by promoting clotting in open wounds but is more commonly used in research and is available for purchase online.

Separately, the post plays into a greater QAnon conspiracy theory of the "deep state" and a purported global cabal of pedophiles who thirst for the blood of children and sacrifice them in satanic rituals.

The claim appeared in a post and video (archived here) on Instagram that were published on October 23, 2022. The title in the video reads, "Might wanna see this doc... for educational purposes..." The text at the bottom of the video says:

This is not all I have in my possession. though this patent is publicly available for all. 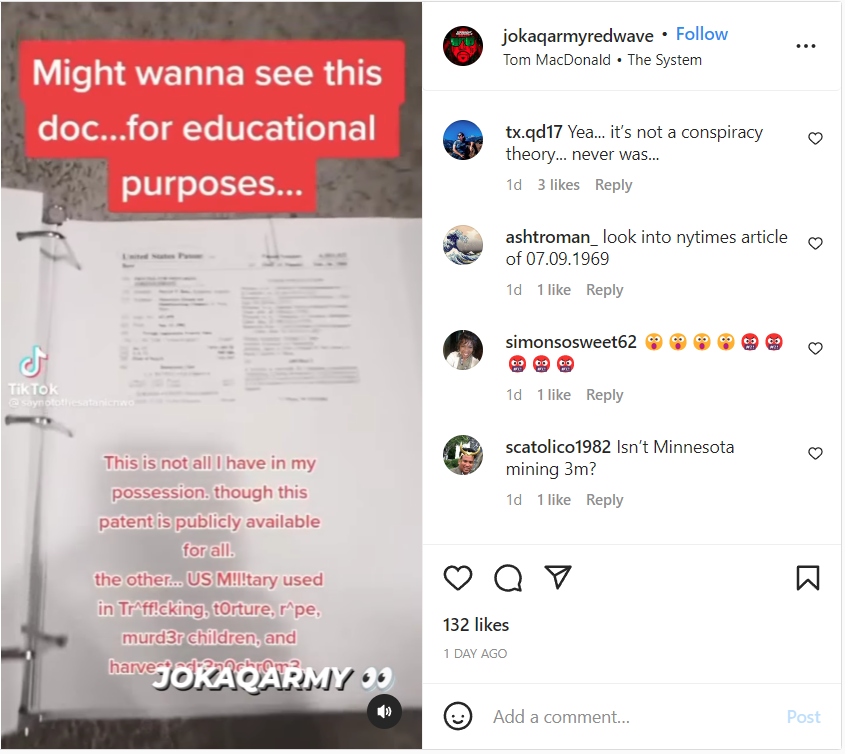 The video, which originated on TikTok, has circulated widely on social media, including these duplicate posts on Instagram (archived here) and TikTok (archived here and here).

The text at the bottom of the video is a thinly coded play for those following QAnon messaging. "Tr^ff!cking, t0rture, r^pe, murde3r children, and harvest adr3n0chr0m3" are easily translated to trafficking, torture, rape, murder children and harvest adrenochrome.

In an October 25, 2022 email, Dr. Joseph Pierre, a health sciences clinical professor of psychiatry at the University of California, San Francisco, told Lead Stories he sees ulterior motives in the post:

The Tik Tok video seems designed to fan the flames of QAnon beliefs about liberals harvesting adrenochrome from children as if there's newfound evidence to support it, but as with most conspiracy theories, there's a more rational explanation ...

[A]drenochrome is typically synthesized in a lab by oxidation of epinephrine (adrenaline). There would be no rational reason to 'harvest' it from people, even if that were possible.

In a Men's Health article from March 31, 2022, Pierre talked more about QAnon and its mythical link to adrenochrome:

A central conspiracy theory circulating within the QAnon movement is that deep state Satan-worshipping pedophilic liberals are behind an international child sex trafficking ring. A more fringe aspect of that theory is that they are harvesting adrenochrome from children and then self-administering it as a kind of fountain-of-youth potion.

There's no evidence the chemical compound holds the promise of immortality or, as another Lead Stories fact check addressed, any sort of hallucinogenic properties. The notion of adrenochrome having LSD-like qualities has a literary basis but not a scientific one. Writer Josie Adams described it this way in an April 7, 2020 article in The Spin:

Aldous Huxley's 1954 essay 'The Doors of Perception', written mostly about his experiences with mescaline, discusses the possibility that adrenochrome is a compound with similar effects to the psychedelic cactus. He has not taken it, and doesn't know how one would obtain it, saying just that it's spontaneously produced by the human body. He describes it as 'a product of the decomposition of adrenaline', which is, surprisingly, correct.

There's a brief mention of 'drencrom' in the 1962 novel A Clockwork Orange, where it's an optional addition to the cocktail (glass of milk) Moloko Plus, but probably the most cited use of the compound is in Hunter S Thompson's Fear and Loathing in Las Vegas. It might be a novel, but many assumed it was a real thing that people really did. ...

In the DVD commentary on the 1998 Fear and Loathing adaptation, director Terry Gilliam said Thompson told him he made the whole adrenochrome thing up.

The patent showcased in the video is more than three decades old. It was filed on September 13, 1982 and approved on February 26, 1986. Its description does not mention harvesting adrenochrome from people, only how to produce it. In an October 26, 2022 email to Lead Stories, 3M said:

This patent describes making adrenochrome in four different ways, all of which are in a beaker using purchased chemicals. Please see the four examples [in the patent's description]. The resulting adrenochrome is then used as a hemostatic and in the preparation of useful medicines, as is stated in ... the patent.

This patent does not describe or suggest harvesting adrenochrome from a human.

Full details on the patent and its description can be found here and here.

Other Lead Stories fact checks related to QAnon claims can be found here.