Do flu shots "contaminated with formaldehyde and polysorbate 80" pose a potential health risk to those vaccinated against influenza? No, that's not true: Some flu shots do contain formaldehyde and polysorbate 80, but the amounts are too minimal to cause any harm to the average person, the Centers for Disease Control and Prevention told Lead Stories.

The claim about contaminated flu shots appeared in an October 4, 2022, Instagram post. The image's caption asked, "Did I catch your attention? Good. Now go actually research what you put in your body 🙃."

The text for the image's graphic read:

Elderberries are contaminated with formaldehyde and polysorbate 80. Just kidding ... That's the flu shot. 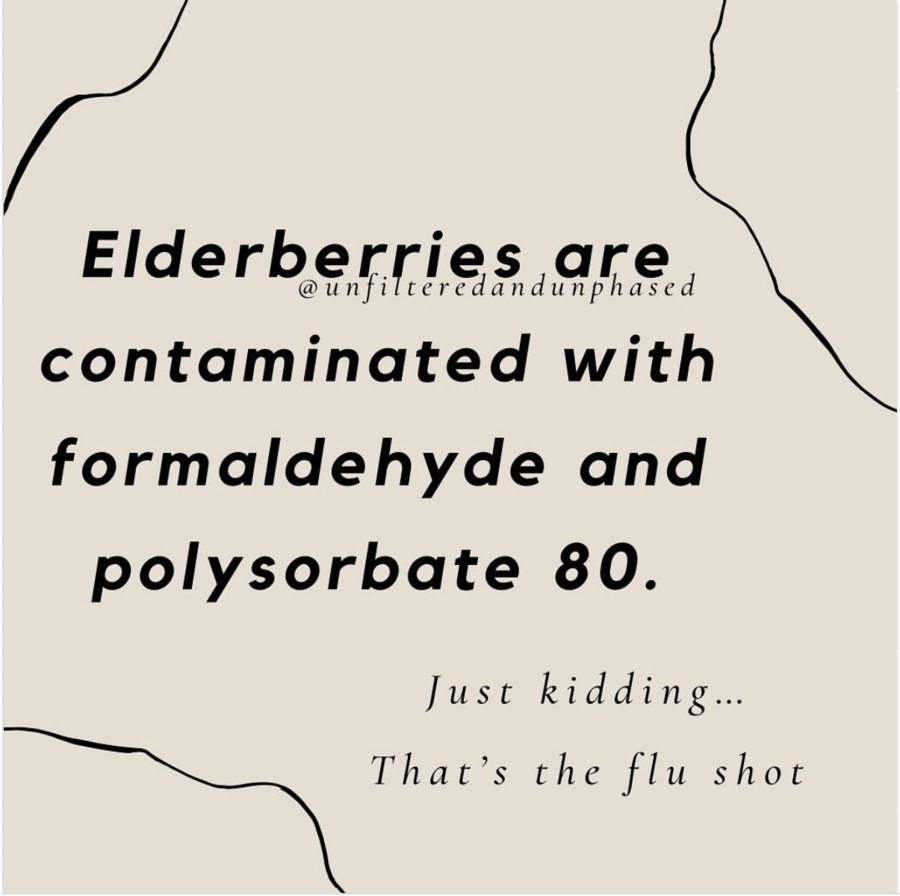 The Environmental Protection Agency defines formaldehyde as a colorless, flammable gas, which, at room temperature, has a strong odor. It can be found in preservatives in some medicines, glues, paints and coatings. It also occurs naturally in the human body.

The Food and Drug Administration (FDA) defines polysorbate 80 as a food additive that stabilizes food. The FDA's Code of Federal Regulations lists a number of foods, such as ice cream and pickles, that are permitted to contain polysorbate 80.

In response to Lead Stories' inquiry for further clarification about the risks these additives pose, the CDC's Immunization Safety Office responded on October 5, 2022, via a spokesperson that:

In some vaccines, formaldehyde is used "to detoxify bacterial toxins" and "inactivate viruses" to prevent the spread of disease, according to the FDA. These vaccines contain, however, only "residual quantities." The agency writes:

The amount of formaldehyde present in some vaccines is so small compared to the concentration that occurs naturally in the body that it does not pose a safety concern.

A Children's Hospital of Philadelphia (CHOP) overview of the presence of formaldehyde in U.S.-licensed vaccines states that flu vaccines with the additive contain "between < 0.005 - 0.1 mg." (A milligram is equivalent to just under .00004 ounces.)

The second additive mentioned in the claim, polysorbate 80, is used to preserve vaccines properly during their "manufacture, storage, and transport," according to CHOP.

Other than its use in vaccines, polysorbate 80 is a common stabilizer also found in ice cream (170,000 micrograms -- a millionth of a gram -- per half-cup), the hospital noted. The two vaccines it listed, COVID-19 and HPV, contain under 200 micrograms.