Does the fact that planes can take off and land prove that the Earth is flat? No, that's not true: The claim ignores Newton's first and second laws of motion that explain how both happen on the constantly spinning Earth.

It should be near impossible to land a plane on a ball spinning 1,000mph..or to hover a helicopter in flight, then land in the exact same spot...

You can fly anywhere in the world without flying upside down or landing on the side of a globe.

Planes have already proven that the earth is flat and stationary. 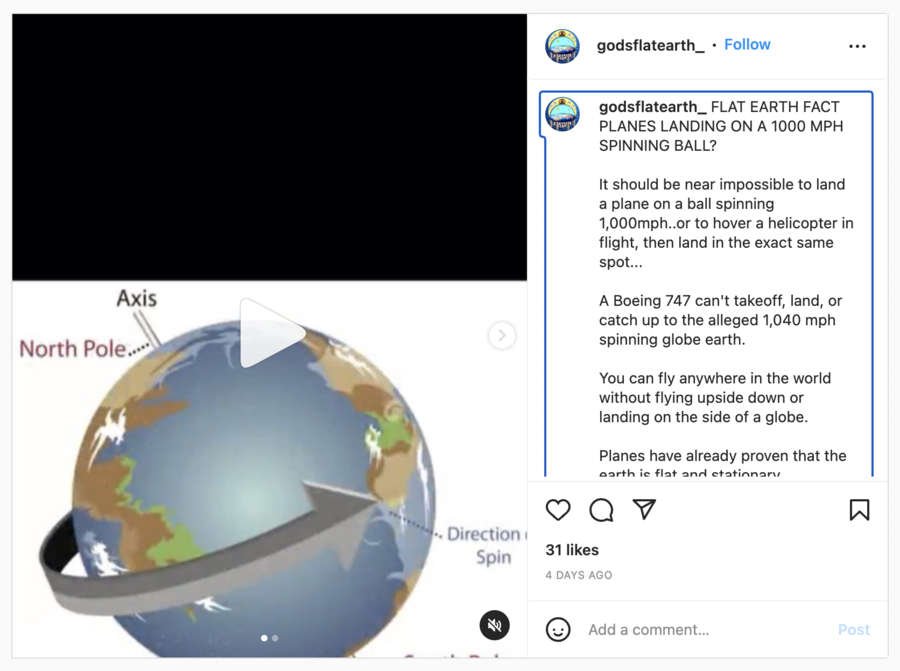 The Earth spins as a result of the motion it inherited from the cloud of moving particles that formed the planet. The spinning speed is the fastest at the equator, about 460 meters per second or 1,000 miles per hour. But people don't feel the spinning due to gravity that keeps humans and most objects close to the Earth's surface. Yet, people and objects that appear to be standing still move with the same speed the Earth does. This is explained by Newton's first law of motion:

An object in motion remains in motion at a constant speed and in a straight line unless acted on by an unbalanced force.

One educational video gives these examples. At the 1:35 mark:

... an airplane standing on the runway is moving with the Earth at the speed of 1,600 kilometers per hour. So when it takes off and flies in the air, it retains the same speed.

If the Earth's spinning speed were the only force applied to airplanes in the air, they wouldn't be able to travel any distances. But that's where we see Newton's second law of motion in action. Here is how a NASA video explains it, at the 2:18 mark:

Thus, planes can take off and fly across oceans: They are moved by engines, making them fly faster than the Earth's spinning and, thus, enabling them to travel long distances.

The opposite process occurs when a plane lands. Pilots reduce its engine power, thus canceling the impact of an additional force. When the plane stops on the runaway, its speed equals the Earth's spinning speed again.

The flat Earth is an ancient concept that can be found in many cultures across the globe, but it was proven scientifically wrong, with Pythagoras (570 B.C. to ~500 B.C.) being among the first to observe it.

Despite a growing body of evidence that the Earth is round, the theory about its flatness started to resurface again in 1865, when Samuel Rowbotham -- "a smooth-talking English inventor and religious fundamentalist" as described by the New Yorker -- published a book titled "Zetetic Astronomy: Earth Not a Globe."