Was a refugee from Ukraine recently caught defacing a tile floor with a swastika in a UK shopping center and then made to clean it off? No, that's not true: A bystander video of the incident first surfaced online in 2018, and no evidence exists that the young man scrubbing the swastika off the floor is a Ukrainian refugee. He has not been publicly identified. Nor does the blue-and-yellow scarf the man is wearing represent Ukraine's blue-and-yellow flag. The scarf's text states "BH Fanaticos," a group of fans of national sports teams in Bosnia and Herzegovina, a country that also has a blue-and-yellow flag.

The earliest copy of the video Lead Stories identified was posted on 9gag.com on December 18, 2018. It was titled "A member of the master race publicly made to clean his graffiti." The next day, on December 19, 2018, the video also appeared on Reddit.

On September 10, 2022, the video was posted on Twitter (archived here). The accompanying text reads:

In London, a Ukrainian refugee was forced to erase... a swastika painted by him 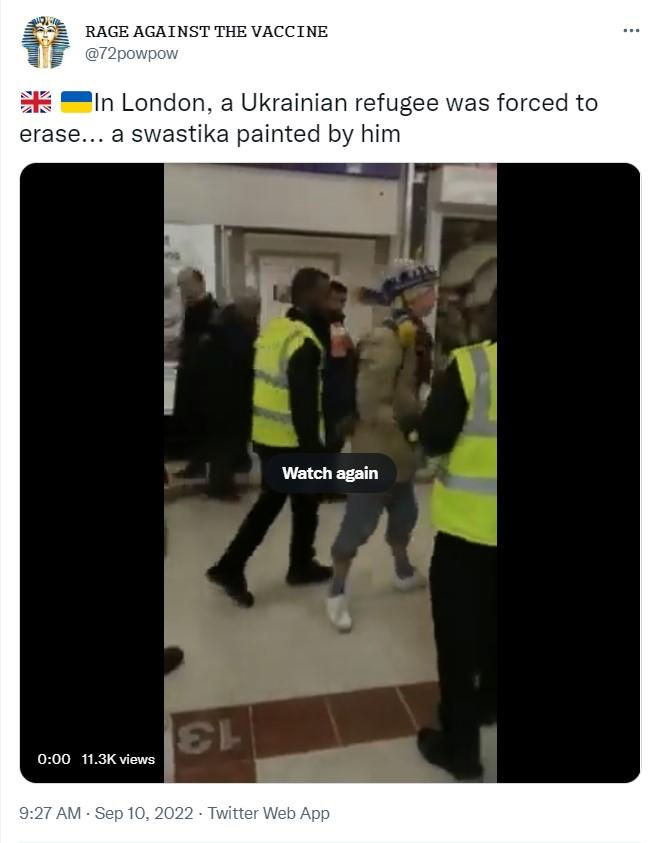 The descriptions for versions of the video posted in 2018 did not state or suggest that the man erasing the swastika was Ukrainian.

#London: Made to clean their own graffiti by staff via Reddit https://ift.tt/2Cnj8T7

East London: A man is forced to clean off the swastika HE DREW on the floor of Stratford shopping center.

But when the video resurfaced in 2022, a new detail had been added -- a claim that it was a Ukrainian refugee who wrote the swastika on the floor.

A September 10, 2022 tweet of the video provides an example:

#Ukranian refugee in #London, made to clean off the Nazi Swastika he drew on the floor. How many radicalized Nazis has the West fast tracked into their own countries? If #UkraineWillWin? What will it cost our Western economies, quality of life & society in general?

Ukrainian nazi refugee In Britain made to clean the swastika he'd defaced the tiles with. Post by Intelrepublic on telegram

Lead Stories could find no evidence that the identity of the person who painted the swastika has been made public or that he was a Ukrainian refugee in London in 2018.

Indeed, no connection with Ukraine can be proven at all. Lead Stories has determined that the folded blue-and-yellow scarf the man is wearing around his head is for BH Fanaticos.

Below is a Lead Stories composite image showing screenshots taken from the video, and a variety of scarf designs found online for BH Fanaticos. While an exact match for the scarf in the video was not found (only the lower part of each block letter is visible in the video), the design elements are consistent; most notably, the slogan "BOSNIAN SUPPORT ARMY." This matches the text "SUPPORT ARMY" seen 10 seconds into the video when the man pauses and looks up toward the camera.

The scarf fonts seen in the video and in the comparison image below are not identical, but resemble each other sufficiently to prove that this is a BH FANATICOS scarf with a white line border and yellow fringe. 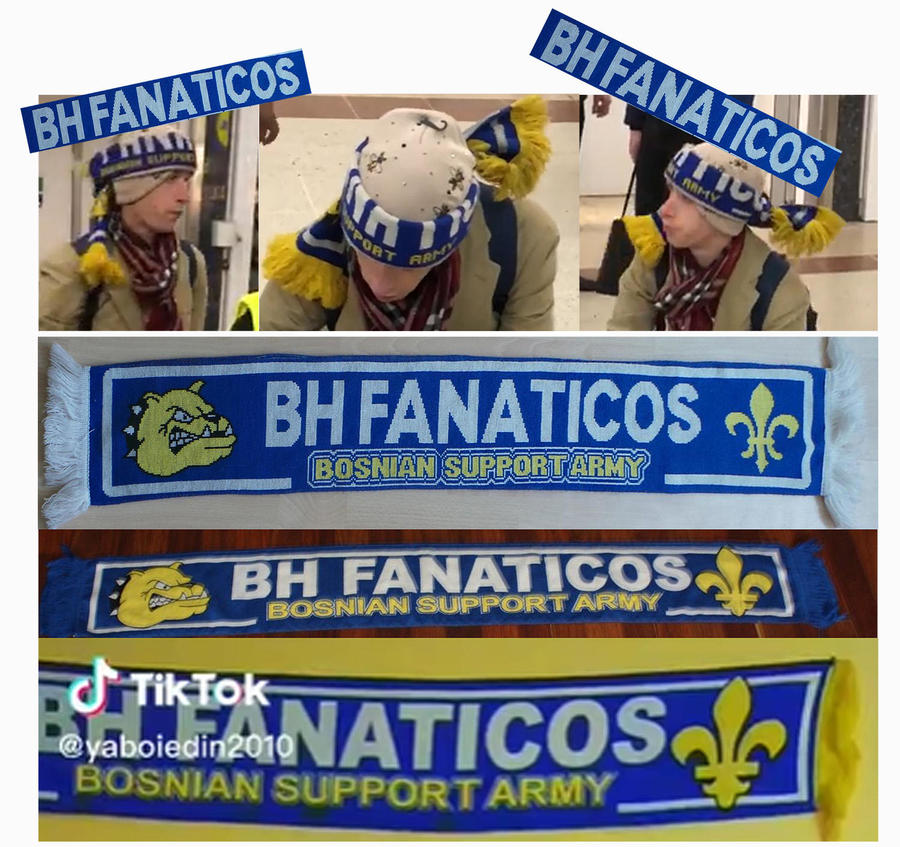