Did Sophia Stewart win a $2.5 billion lawsuit against Warner Bros., Twentieth Century Fox and other Hollywood filmmakers for stealing ideas from her manuscripts to make "The Terminator" and "The Matrix" movies? No, that's not true: Stewart filed a lawsuit against these defendants, claiming they stole her ideas for the blockbuster movie franchises, but a California judge dismissed her case in 2005, according to documents publicly available online. Stewart did not receive anything, much less $2.5 billion, from the lawsuit.

Sophia Stewart wrote books in the 70's that were stolen from her by Warner Bros. (Terminator 1-4 and The Matrix 1&2! Her lawsuit took 30 years but she won Hollywoods biggest lawsuit, $2.5 Billion. 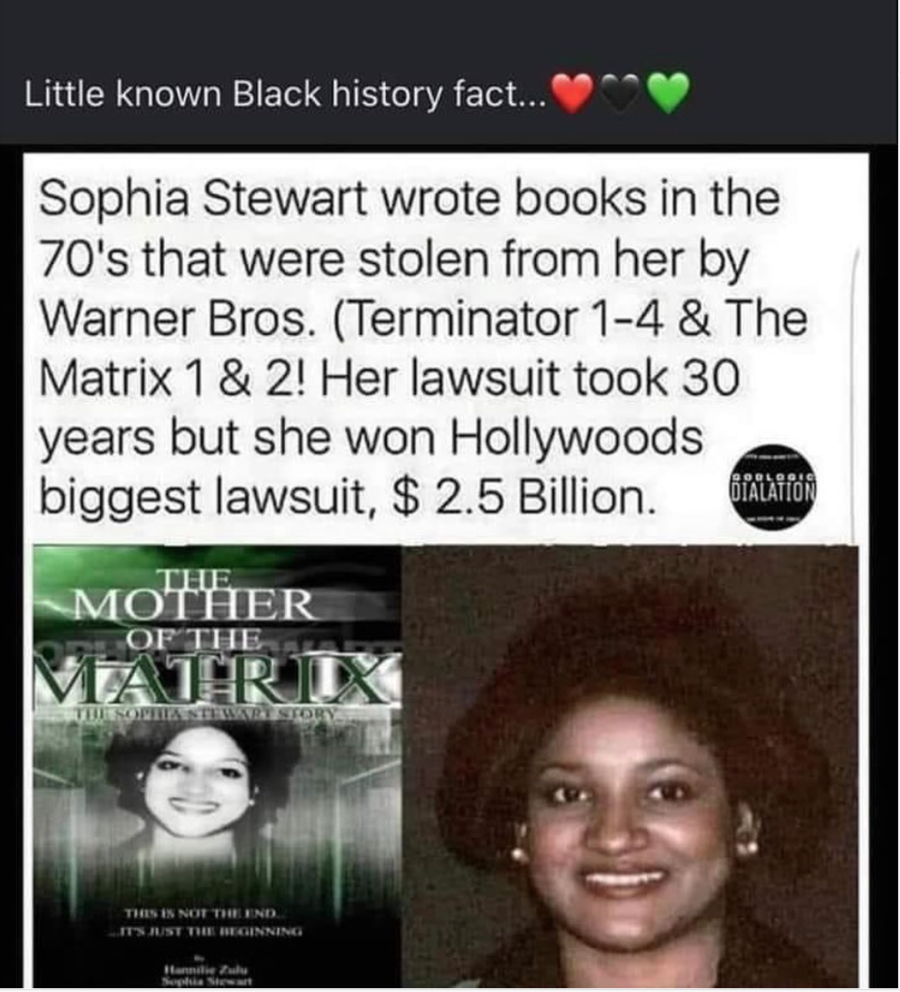 In 2005, Stewart sued Twentieth Century Fox Film Corporation, writer-director James Cameron, producer Gale Anne Hurd, Warner Bros. Entertainment, writer-directors Andy Wachowski and Larry Wachowski and others for allegedly using her copyrighted treatment (a summary of a film) and another manuscript she had copyrighted to create the Terminator and Matrix movies. Details of the lawsuit can be found here.

Margaret M. Morrow, a judge for the U.S. District Court for the Central District of California, dismissed her case on June 14, 2005, according to court documents. Morrow stated in her decision that Stewart and her attorneys failed to provide any evidence to support her claim that her ideas were stolen for the movies. The ruling read: "For the reasons stated, the court denies Stewart's motion for reconsideration." Stewart did not receive a $2.5 billion award in the case.

The false claim about the enormous payout to Stewart began in October 2004, with an article published in the Salt Lake Community College Globe newspaper (archived here). The article stated:

Stewart, a New Yorker who has resided in Salt Lake City for the past five years, will recover damages from the films, The Matrix I, II and III, as well as The Terminator and its sequels. She will soon receive one of the biggest payoffs in the history of Hollywood, as the gross receipts of both films and their sequels total over 2.5 billion dollars.

This assertion about Stewart's win was not true. Within a few weeks of the article's publication, the newspaper posted a correction, writing:

In reference to the recent article entitled 'Mother of the Matrix Victorious,' some information has been deemed misleading. Ms. Sophia Stewart has not yet won her case against Joel Silver, Time Warner and the Wachowski Bros. The decision on October 4th enabled Ms. Stewart to proceed with her case, as all attempts to have it dismissed were unsuccessful. Ms. Stewart's case will proceed through the Central District Court of California.

However, the original article was widely circulated, without including the newspaper's correction that the premise of the article was incorrect.

The Los Angeles Times reported on the incorrect claims regarding the lawsuit back in 2005, but the claims persist in 2022.