Are Pope Francis, the late Queen Elizabeth II and U.S. President Joe Biden members of the same family? No, that's not true: There is no evidence supporting this online rumor, which recycles a 24-year-old conspiracy theory.

I KNOW SOME WEIRD SHIT WHEN I SEE SOME WEIRD SHIT. THESE ENTITIES ARE ALL RELATED FAMILY. POPE FRANCIS IS QUEEN ELIZABETHS BROTHER & JOE BIDEN THEY COUSIN 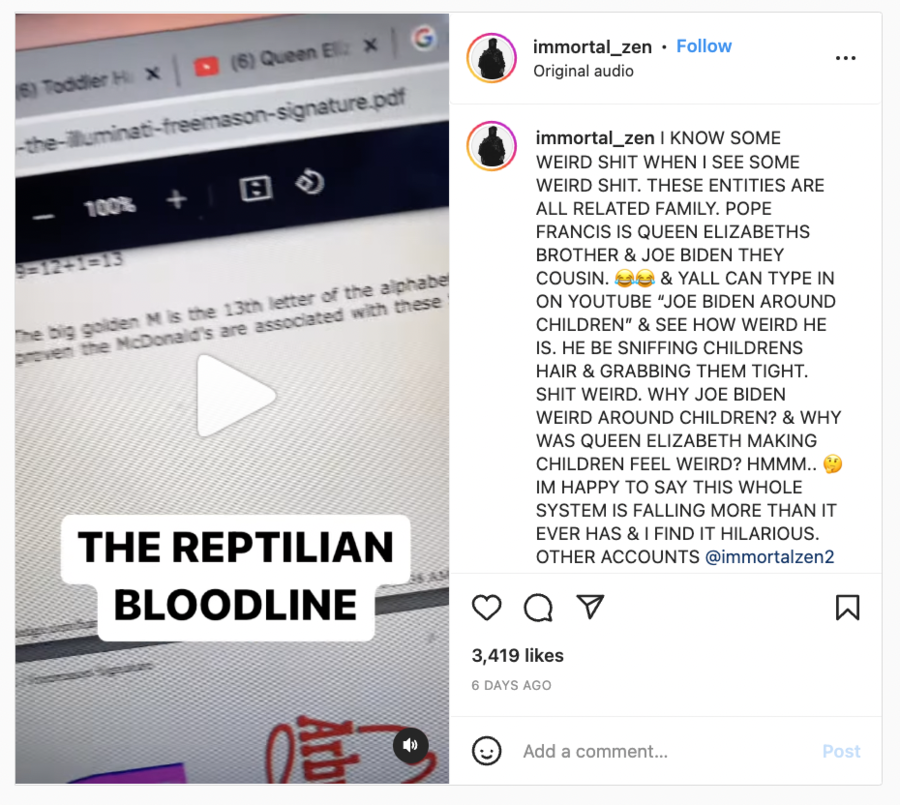 However, the male voice-over in the attached video, titled "The Reptilian Bloodline," admits that there is no evidence to support this claim. The narrator states:

Pope Francis and Queen Elizabeth are related. I don't have any facts behind this except for my intiution, [laughs] and me just being funny right now.

Closer to the end of the video, the narrator refutes the second part of his own claim:

Joe Biden, he ... Joe Biden not even Joe Biden. I don't know if he related to [laughs] Pope Francis and Queen of England, but they probably cousins [laughs].

A BBC family tree of the British royal family, which shows the closest relatives of the recently deceased Queen Elizabeth II, does not include Pope Francis or Joe Biden.

According to a Vatican biography of Pope Francis and other publicly available materials, the current head of the Roman Catholic church, whose birth name was Jorge Mario Bergoglio, came from a lower-middle-class family of Italian immigrants to Argentina without any ties to the House of Windsor, from which the British royal family is descended.

Unlike former President George W. Bush, whose distant connection with British monarchs was reported by a genealogical firm in the early 2000s, President Joe Biden does not appear to have any royal ancestry. While there were family rumors about some aristocratic lineage, no evidence confirms that he is a cousin to Queen Elizabeth II or Pope Francis.

An in-depth August 22, 2022 New Yorker article on Biden's family history did not mention ties to either person. Additionally, nothing indicates that Joe Biden has any Italian or Argentinian ancestry connecting him to Pope Francis.

The video's narrator alleges that all three individuals are, in fact, reptiles.

Lead Stories previously has debunked claims about the supposed existence of "shape-shifting reptilian beings." Fellow fact-checkers at Politifact have refuted such claims, in particular, about President Biden and the late Queen Elizabeth II.

In the United States, variations of these theories became noticeable in politics in 2008, when some Minnesotans voted for "Lizard People" to represent the state in the U.S. Senate. Some QAnon supporters have promoted the same false narrative.

Other Lead Stories fact checks related to claims about "shapeshifters" or reptilian beings can be found here.