Do the "unevolved" lifeforms shown in a social media video prove that evolution is a hoax? No, that's not true: Not all change is external and not all change happens within the time parameters outlined for the flora and fauna shown in the post. Scott Reese, a Kennesaw State University associate professor of biology, told Lead Stories that the video "reflects a deep misunderstanding of evolution and an unwillingness to learn."

The claim appeared in a post and video on Instagram (archived here) published on October 26, 2022, under the title "WHERE IS THE EVOLUTION?" The description for the video includes these hashtags: 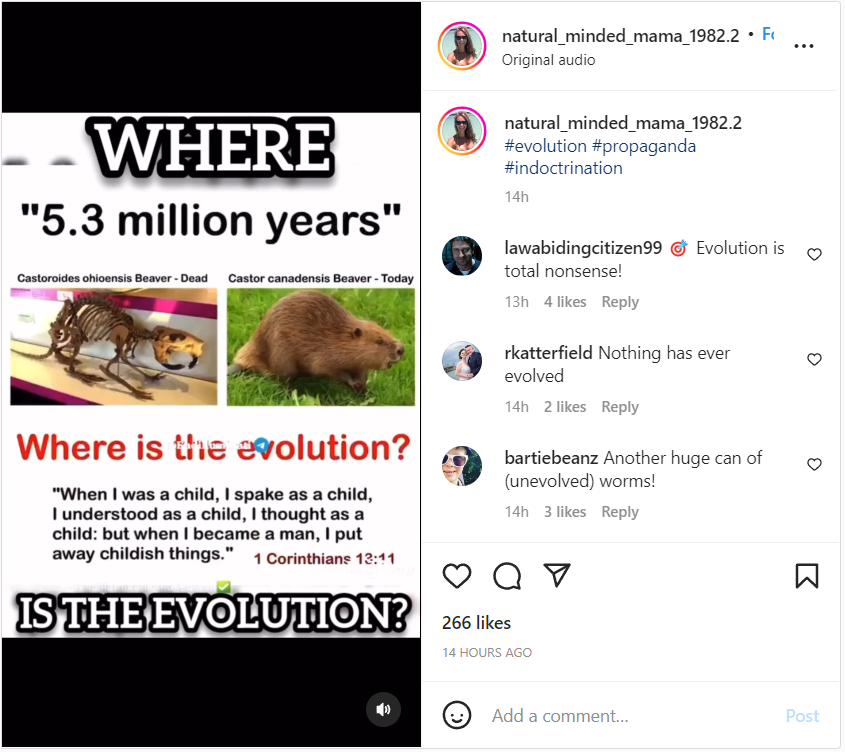 The video contains 45 seconds of images, set to dramatic operatic music, that compare ancient living things with their modern-day cousins. The text mantras repeated throughout are: "Where is the evolution?" and "evolution is government propaganda." These phrases also appear in the video:

Remove the evolution goggles and think for yourself ...

They preach evolution to be true but they will never provide a real example simple because there are none. ...

As you can see with your own eyes
no evolution at all
God created it good to begin with. ...

Dozens of examples of side-by-side comparisons of animals, insects and plants appear in the video. Three of them are shown below: 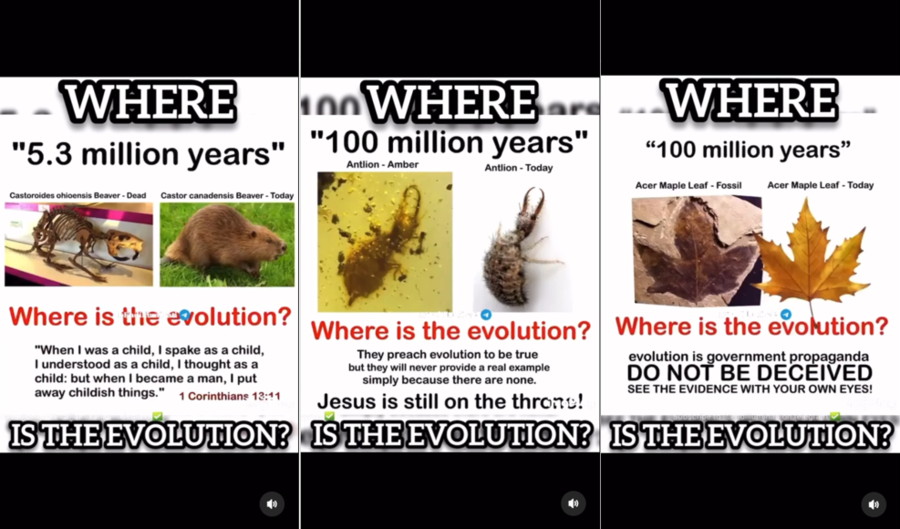 Not the same things

In total, the video shows some 50 cases where evolution is questioned. In an October 27, 2022, email to Lead Stories, David Rand, the chair of ecology, evolution, and organismal biology at Brown University, said the presentation doesn't meet scientific muster:

In short, the video is blatantly selective in its evidence and makes a fatal mistake in trying to assert that no observable change in external traits is 'proof' that evolution has not happened. ...

The video even failed to show the famous example of horseshoe crabs that have virtually the same body plans for millions of years. Studies of the genes and proteins of those horseshoe crabs show very clearly that lots of evolution has continued at the molecular level in those organisms at rates very similar to other organisms that do show change in traits.

So, evolution does NOT have to lead to outward, external traits that appear similar when given a 2-second glimpse in a poorly prepared video. A careful look at some of the images show noticeable differences between the living and fossil examples they show. This is lame.

In a separate October 27, 2022, email, Kennesaw State University's Reese told Lead Stories that the video misses on another evolutionary point:

There is an assumption that evolution should have happened in the time spans indicated. This one is a bit more nuanced, but what we know is that organismal history can include long spans of stasis, when evolution would be minimal or even not existent. Evolution may occur in fits, and starts and proceeds rapidly when particular environmental challenges occur. The timing of that stasis period is variable, depending on the organisms, the environment they live in, the availability of genetic information, and a host of other variables. So, maybe an organism doesn't show much evolutionary change in 50 million years, but give it another 2 million and it'll change dramatically.

In his email, Rand cited examples of evolution that have happened in much shorter periods of time:

And what about the evolution of antibiotic resistance - microbes evolve genetically to escape drug action by mutational changes in their genomes, so penicillin is now almost useless. HIV evolved to escape anti-retroviral drugs in a very rapid span of time. The viruses still look the same on the outside. And Sars-CoV2 [COVID-19] has evolved at the molecular level - have a look at the waves of infection, each tied to a different, EVOLVED virus genome.

In closing his email response to the video, Reese told Lead Stories he recommends a big-picture approach when thinking about evolution:

Evolution is really just about change, how do organisms change in response to changes in their environments. It is really hard to argue against the fact that organisms are capable of significant change given the right environmental triggers. We can look at our beloved pet dogs and see the range of physical forms possible given the impetus to make change ... Life is capable of dramatic amounts of change and that is evolution.