Did the U.S. government file a patent to use an enzyme called luciferase to track the vaccination status of individuals? No, that's not true: While the patent is authentic it was filed on September 16, 2019, predating the COVID-19 pandemic, and was accepted in November 2020. Separately, the claim is not supported with credible public documentation that the U.S. government intends to use luciferase to track or inspect vaccination status. The claim originated in a nearly five-minute video published on the website New Tang Dynasty on September 20, 2022 (archived here). Text that accompanied the video read:

NTD spoke with Crossroads host Joshua Philipp about a patent filed by the U.S. government for fusion proteins containing luciferase, which could be used to track people's vaccination status. Philipp said it sound alarm bells for everybody.

That same video was shared on Instagram on October 19, 2022. Here is how the post appeared at the time of this writing: 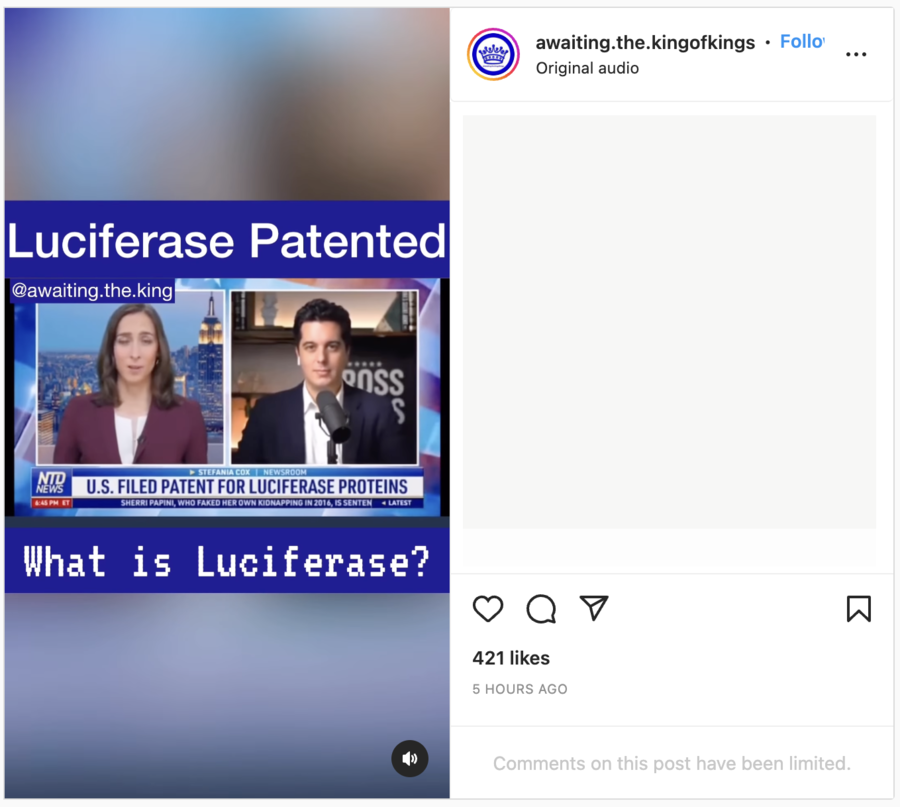 Below, from the 0:47 mark, is an excerpt of the dialogue between NTD News host Stefania Cox and Crossroads host Joshua Philipp:

Cox: There are now, reportedly, proposals to use this product to start tracking people's vaccination status with an injectable that would sit under the skin. ...

[At 1:34] Philipp: One of the reasons they want to use it [luciferase] for these marks they want to give people -- and the Department of Homeland Security has filed a patent for it ... is because it's bioluminescent and shows up under UV light. And so they can scan you, almost like a barcode. They can scan this mark they give you, and it can bring up, for example, almost just like a QR code -- again, like you scan with your smartphone -- it can bring up data on your vaccination status or any other data they want to include on you.

The patent in question was filed on September 16, 2019, predating the COVID-19 pandemic, and was accepted in November 2020. Separately, there is no record that the U.S. government intends to use luciferase to track or inspect vaccination status.

Luciferase has long been connected with conspiracy theories surrounding COVID-19 vaccinations. As a naturally occurring light-producing enzyme found in insect fireflies, as well as luminous bacteria, fungi and organisms like jellyfish, luciferase is commonly used in medical research as a "marker" (other markers include fluorescent proteins). Luciferase genes are synthesized and inserted into organisms, cells or genes to serve as a "mark" of the item being researched or tested.

In the era of COVID, luciferase has been used to identify interactions between the virus and host cell proteins and provided crucial information in the development of vaccines and drug therapies, according to a 2021 study published in the American Chemical Society's peer-reviewed journal Nanoscience.

In a longer video published by Epoch Times on September 14, 2022 (archived here), Philipps referenced a 2019 study that described "dissolvable microneedles that deliver patterns of near-infrared light-emitting microparticles to the skin." The study further described the technology:

Particle patterns are invisible to the eye but can be imaged using modified smartphones. By codelivering a vaccine, the pattern of particles in the skin could serve as an on-person vaccination record.

Luciferase was not mentioned in the study.

A look through the patent application (archived here) shows it was filed by the U.S. government on behalf of the Department of Homeland Security. It described the technology as being "fusion proteins containing luciferase and a polypeptide of interest." It was a continuation of another application filed on May 1, 2017. Below is the abstract of the patent application:

There is nothing in the patent application outline that suggests the fusion proteins could be used to "mark" an individual or to inscribe that marker with readable data on that person's vaccination status.