Did Sen. Josh Hawley say the phrase "I will not use your pronoun" while questioning a "liberal general" at a U.S. Senate hearing? No, that's not true: Neither a video published on Facebook under this attention-grabbing headline nor the full recording contained this sentence. Participants in the hearing referred to each other by title or rank combined with their last names, standard practice for the official settings, not an act of refusal to use anyone's pronoun. 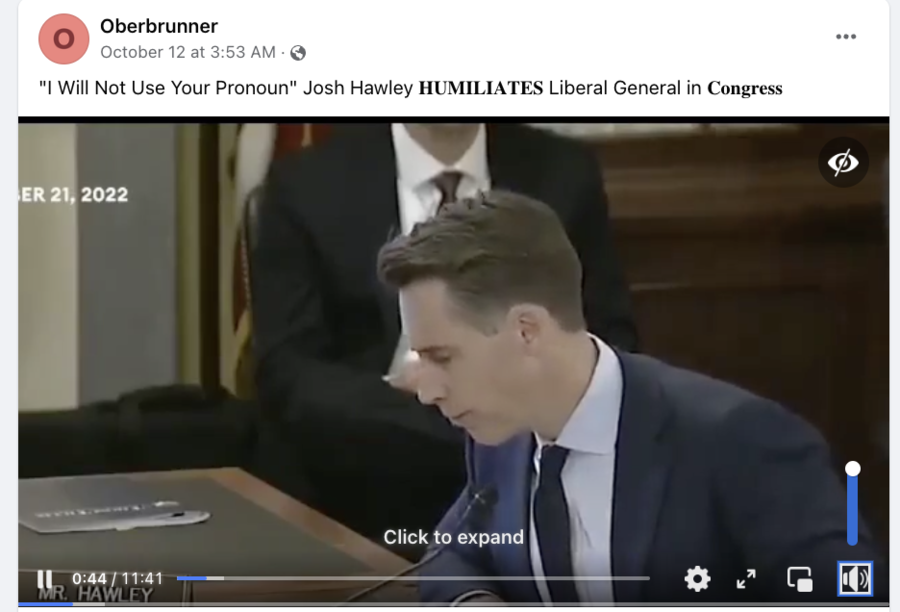 The post on Facebook showed an authentic fragment of a Senate Armed Services hearing on the recruiting and retention efforts in the Defense Department on September 21, 2022. The official transcript is available via the U.S. Navy's resources, and the full recording can be found on the U.S. Senate Committee on Armed Services website.

At the 3:17 mark, Facebook users could hear the following exchange between Sen. Josh Hawley and Lt. Gen. Caroline Miller, the deputy chief of staff for manpower, personnel and services at the U.S. Air Force Headquarters in the Pentagon, who repeatedly denied Hawley's suggestion that the Air Force had banned pronouns:

HAWLEY: General Miller, let me come to you. Can you help me with something here? Anderson Air Force Base, I understand, this is in Guam, of course. Leaders there recently received an official email that prohibited them from using pronouns or descriptors like he, she, youngest, oldest, male or female. Why is that? I mean, what's going on?

MILLER: Senator Hawley, thank you for that question. Actually, that is--we've been talking a lot about that because it was an email, from my understanding, that went out locally from one of the commanders there. And I don't remember at what level. I don't know if it was a group commander or the wing commander there. I believe that it was a Facebook post that went out based on a question. It is not the Air Force policy to not use pronouns. And so I think it was a social media exacerbated by individuals that said that they were directed for that.

HAWLEY: Ah, okay. Good. Well I think that's progress. So you're saying, I'm looking at a news article here published August 31, 2022, saying that PACAF [Pacific Air Force] has sent this letter around. Leaders of the base are instructed, do not use pronouns, age, race, etcetera, and they go on. The unauthorized. Examples of unauthorized language are male, female, youngest, oldest, he, she.

But you're saying that that was not official communication. That has not been a directive?

MILLER: That is not an official communication from the half. Correct.

HAWLEY: Okay. Okay. And so your position to me is today that that is not policy and that they have not been so instructed, that this is a social media kerfuffle [Ph]?

HAWLEY: I mean, this is not real? It's not happening?

MILLER: I don't know if it's not happening, but it is not an official policy from the Department of the Air Force.

During this exchange, Hawley addressed the testifying witness formally by rank and last name, the same way other participants addressed each other. There was no refusal to use anyone's pronoun.

The clip on Facebook continues with a fragment from another Senate event, a hearing on abortion access that took place on July 12, 2022 (a full recording is available here.) It did not show any generals testifying but contained Hawley's exchange with a civil legal expert on the matter, University of California Berkeley School of Law professor Khiara Bridges. It began at the 5:41 mark:

HAWLEY: Several times, you've used a phrase, I want to make sure I understand what you mean by it. You've referred to 'people with a capacity for pregnancy.' Would that be women?

HAWLEY: So this isn't really a women's rights issue.

BRIDGES: We should recognize that this impacts women while also recognizing that it impacts other groups. Those things are not mutually exclusive, Senator Hawley.

HAWLEY: Oh, so your view is that the core of this right then is about what?

BRIDGES: I want to recognize that your line of questioning is transphobic, and it opens up trans people to violence by not recognizing that.

During this exchange, Hawley also addressed the witness in a formal manner -- as "Professor Bridges." The matter of his opponent's preferred pronoun was never a part of this conversation.

The Facebook page that published the claim is not affiliated with any major media organizations. It does not even claim that what it publishes is news or some kind of journalistic content. Instead, the page description says that it's run by a photographer who is not based in the U.S. The Page Transparency section shows that its managers are located in Indonesia and Syria: 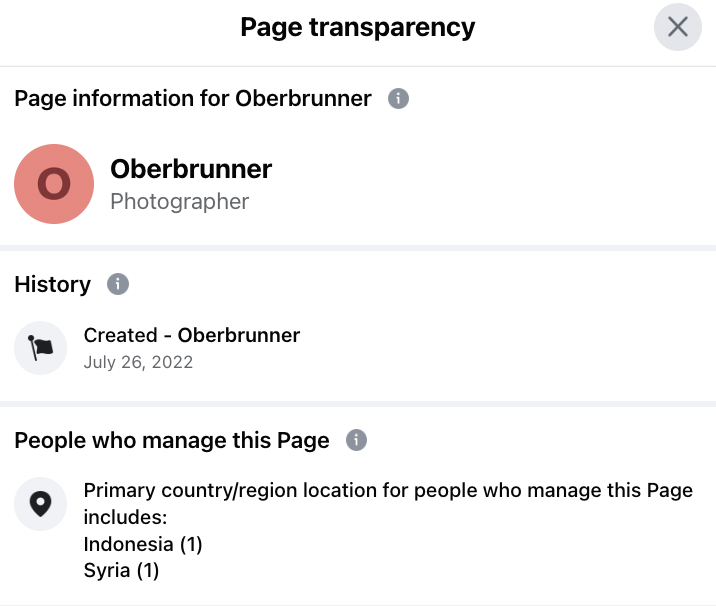