Did 16 million registered voters in New Mexico "drop overnight," within a 24-hour window before Election Day? No, that's not true: A spokesperson for the New Mexico secretary of state's office, which helps administer elections, confirmed that the secretary of state's website had shown mock data while undergoing testing before the November 8 vote. A notice on the website, however, told visitors that testing was underway, he said. The spokesperson acknowledged, though, that this notice had been removed before the mock data had. On November 8, Election Day, the website showed the correct information, he confirmed.

The claim originated from an article (archived here) published by Gateway Pundit on November 7, 2022. The title said:

Yesterday when you went to the Secretary of State's website in New Mexico you could see that over 17 million people were reported as registered in the state. This had been showing for days.

The problem is there are only 2.1 million people who live in the state.

Here is how the piece appeared at the time of this fact check's writing: 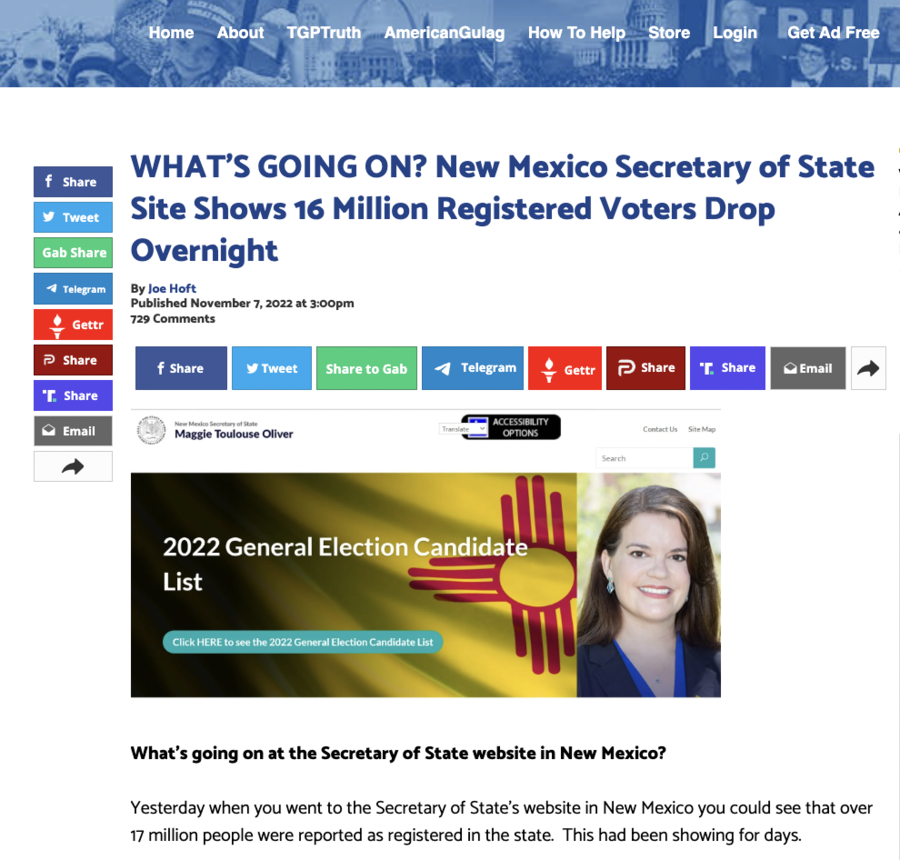 The article alleged that the secretary of state's website changed on November 7 to show a total of 1,361,941 registered voters. The content contained what appeared to be a screenshot of the New Mexico Secretary of State's website that seemingly confirmed the report about what the Gateway Pundit termed a "very odd" fluctuation:

However, this change neither reflected an actual drop in the number of registered voters, nor was inexplicable.

The election night reporting (ENR) website was in test mode and had mock data for the last few weeks as we ran a test election with the county clerks in preparation for tomorrow. It even said "Testing in Progress. Mock Data In Use" in big bold red letters across the front page. We of course are now finished with that test and the ENR site is now prepped for Election Day and the "mock data" message has been taken down.

The page's history confirms that, weeks before Election Day, the "testing in progress" disclaimer was present on the website when it displayed a total number of 17,284,921 registered voters:

The New Mexico secretary of state's spokesperson clarified that the disclaimer was removed earlier than the mock figure of some 17 million registered voters:

The 17m figure was on the site until yesterday morning, and the "Mock Data" disclaimer had already been removed by that time

However, Cuertas confirmed that the website was functioning correctly on Election Day and reflected "the actual voter registration number in NM." As of this writing, that number was 1,364,559 people:

In July 2021, the U.S. Census Bureau estimated the population of New Mexico as 2,115,877 people, which included foreign-born residents (9.2 percent), who may or may not be eligible to vote depending on their naturalization status, and juveniles (22.4 percent), who cannot vote since they are under 18 years old.