Are delayed election results not normal, a Democratic Party plot that slows counting until days after Election Day? No, that's not true: It's becoming increasingly routine to get U.S. election results after election night because of state laws, some passed by Republican majorities, that allow mail-in ballots with postmarks up to election day. Those ballots, which often arrive after election day, are one reason tallies can't be finalized on Election Night. Other changes to county and state laws mandate delays in reporting final results. Plus, final tallies wait for ballots from U.S. citizens living abroad and those serving in the U.S. military overseas.

Delayed election results are not normal, and they're also not coincidental. As Democrats loosen mail-in voting while ignoring the difficulties of ballot counting, delayed results will continue eroding the population's confidence in America's election system. 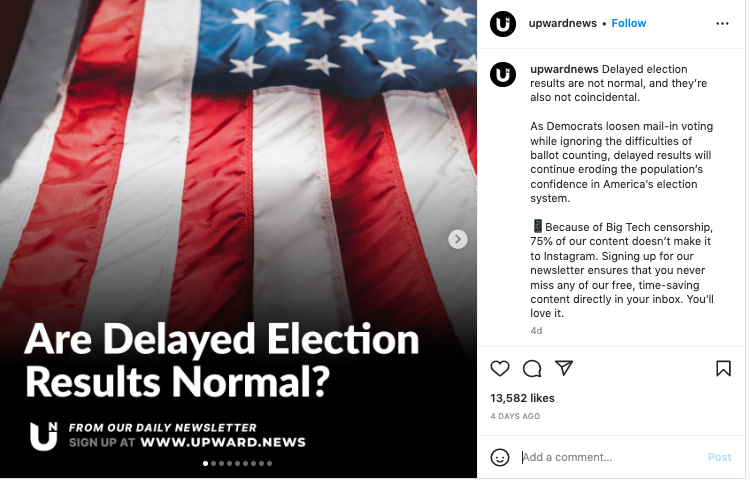 (Source: Instagram screenshot taken on Sun Nov 13 17:53:47 2022 UTC)
In the U.S., voting is conducted according to each state's laws.
It's not up to local election boards or election officials as to how votes are counted. All of it is subject to statute, meaning it's regulated and local officials follow are bound by those laws. It is true that during the COVID pandemic, some states loosened their mail and early voting deadlines to accommodate the large numbers of voters who avoided exposure to the virus and did not use in-person voting. But again, that was a matter of state legislation. It's not a matter of federal law.
The time it takes to compile final election results is not evidence of any problem, says Dana DeBeauvoir, who served as the elected County Clerk for Travis County, Texas for 36 years . In addition to overseeing local state and national elections for 1.3 million voters in Texas, she has consulted with foreign nations developing reliable voting practices. DeBeauvoir served as the Election Committee Chair for the National Association of County Recorders, Elections Officials and since retirement has worked as a board advisor to the Open Source Election Technology Institute [OSET], a nonpartisan nonprofit whose mission is to increase confidence in elections.
In a phone call with Lead Stories on November 12, 2022, DeBeauvoir said the post claiming delayed counts are abnormal contains "a couple of real zingers":

There is no problem; it's complete fantasy.
First of all, it takes a long time to do mail-in processing. It's a tedious process and it takes longer when you have a really high turnout.

In a follow-up text to Lead Stories, also on November 12, 2022, DeBeavoir wrote

It occurs to me that voters don't know that vote by-mail follows the exact same procedure as voting in a polling place. You go in and first show your ID/signature. Then you sign your name to the poll list. That processing is done before ballots are tallied.
The same in by-mail. Only the list of names is created by a bi-partisan team of at least 2 people.
Same with signature verification. Slower than regular voting, but same procedure.
Republicans recently passed laws in Texas and several states delaying processing until after Election Day. Always ballots are tallied after polls close on Election Night. Losing that head start was a deliberate set up for delay but no change in procedural steps.

Most states begin counting absentee/mail ballots on Election Day, others prohibit election results from being released until after the polls close, and many make it a crime to share results earlier than that.
According to the National Conference of State Legislatures, a bi-partisan information resource for lawmakers, 39 states don't allow counting to start until Election Day. Of those, 16 states don't allow counting to start until the polls close. And 19 states accept and count mailed ballots after Election Day as long as they are postmarked on or before Election Day.
Another factor slowing the final tallies in the 2022 General Election is youth turnout: voters ranging in age from 18 to 29. It's likely the second-highest youth turnout rate for a midterm election in the past 30 years, only behind the historic 31% turnout in 2018, according to the Center for Information and Research on Civic Learning & Engagement, (CIRCLE) a nonpartisan, independent research organization focused on youth civic engagement in the U.S. They also appear to be choosing Democrats by a 28-point margin. Amidst all the delays in the 2022 Midterms, it's clear that the youth vote had an impact even if their votes also took a while to be processed too.