Is it true that germ theory has "NEVER" been proven? No, that's not true: This claim was posted without corroborating materials, nor medical credentials for the person to whom the claim is attributed. The germ theory is a scientifically established explanation for infectious diseases. A medical professional told Lead Stories that "intoxication theory," a supposition that disease is the body's "detox process," is not a valid medical theory to describe illness.

The claim emerged in an Instagram post on November 9, 2022, alongside a meme promoting the notion that medical interventions meant to treat infectious diseases impede the body's natural "detox" processes. Text with the post read:

🎯‼️💯🙌 Germ 🦠 "theory" has still NEVER been proven. Sickness is DETOX and means your body is working. I rarely get sick because of my lifestyle (healthy eating, high quality supplements, sauna, meditation...) but do NOT stop the detox process with OTC cold meds and fever reducers! They will prolong and make you get sick more often! Also read a book about terrain theory 😘 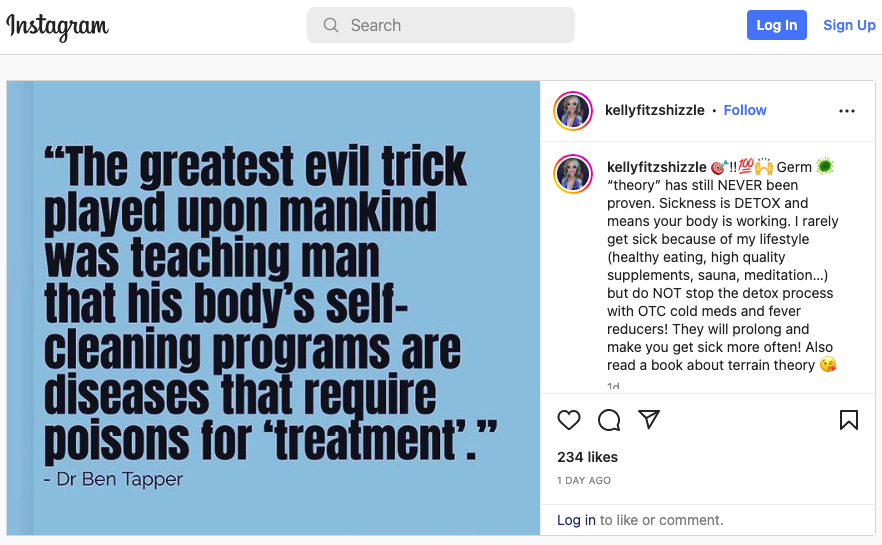 The above quote posits that germ theory, a long-held explanation to describe the spread of infectious diseases, is not true.

In a phone interview on November 11, 2022, Dr. William Schaffner, a professor of infectious diseases at Vanderbilt University Medical Center, told Lead Stories that germ theory is a centuries-old scientific explanation to describe the spread of infectious diseases and is evidenced by the studies of microbiology, virology and bacteriology. Schaffner continued:

The germ theory was first espoused in the late 19th century by pioneering investigators such as Louis Pasteur in France and Robert Koch in Germany. They determined clearly that certain diseases -- anthrax, cholera, tuberculosis, rabies, these are the diseases they studied -- were caused by specific germs. In fact, Dr. Koch in Germany established some postulates that he published in about 1890 in which ... these postulates were criteria for relating microorganisms to specific diseases. The point is, that criteria are now modified by subsequent science, were established in 1890 and it's now clearly established.

The discovery of germ theory was facilitated by the invention of the microscope, which made it possible to view micro-organisms responsible for certain diseases. Germ theory was "developed, proved, and popularized in Europe and North America between about 1850 and 1920." It allowed scientists to pinpoint micro-organisms that were responsible for certain outbreaks and reduce the spread of disease transmission through preventative measures like isolating those infected and hand washing.

For a modern-day example, Schaffner turns to an outbreak of cholera that was announced in Lebanon in November 2022. Cholera spreads when the bacteria responsible for the disease, Vibrio cholerae, is ingested through the consumption of food or water contaminated with feces, the Centers for Disease Control and Prevention (CDC) website says.

"The germ theory is, extraordinarily well established and has resulted in scientific advances that have allowed us to eliminate or profoundly reduce many infectious diseases around the world," Schaffner said.

The claim in the Instagram post presents an "intoxication theory," which suggests that the body accumulates certain toxins or poisons. If these toxins are eliminated through a detox or avoided altogether, then a person will experience good health. Schaffner adds that this is a longstanding yet unfounded theory that predates the 19th century. While it is true that exercising, eating a restrictive diet and practicing other forms of wellness like meditation have been shown to lead to a healthier life, these examples are anecdotal evidence that don't control for other variables in a person's life.

"They don't negate the germ theory, however. Among other things, perhaps [the poster] restricts [their] contact with other people so [they] aren't exposed to COVID or influenza, or just the common cold, as frequently as others. Some people are lucky and they just don't get sick," Schaffner said.

It could also be that a person might simply be "genetically lucky." A growing body of scientific research suggests that some people may be more genetically susceptible to certain infectious diseases because "significant selective genetic pressure" has forced humans to evolve a diverse range of immune responses over the course of human history.

"We're just entering an era where we have the capacity to study genetic predispositions to a whole array of diseases including infectious diseases. This is new science," Schaffner said.