Did gunfire from a sniper in Houston hit and kill Takeoff, a member of the rap group Migos? No, that's not true: At the time of writing, officials have presented no evidence that suggests that a sniper fired at Takeoff, the stage name of 28-year-old rapper Kirshnik Khari Ball.

The claim that a sniper killed Takeoff appeared in a post on Instagram published on November 1, 2022. The post includes apparent footage of the moments before and during the shooting that was obtained by entertainment news site TMZ. The post's caption reads:

#Listen call it a #conspiracytheory or whatever I don't chase clout and I'm not about the death of my people in or out the truth!!!

THE FIRST SHOT WAS A SNIPER RIFLE FROM A DISTANCE!! I REPEAT IT WAS A LONG DISTANT SNIPER SHOT!!!

The Instagram user who posted this claim did not provide any factual evidence for the allegation, which hinges on his personal interpretation of the video footage. 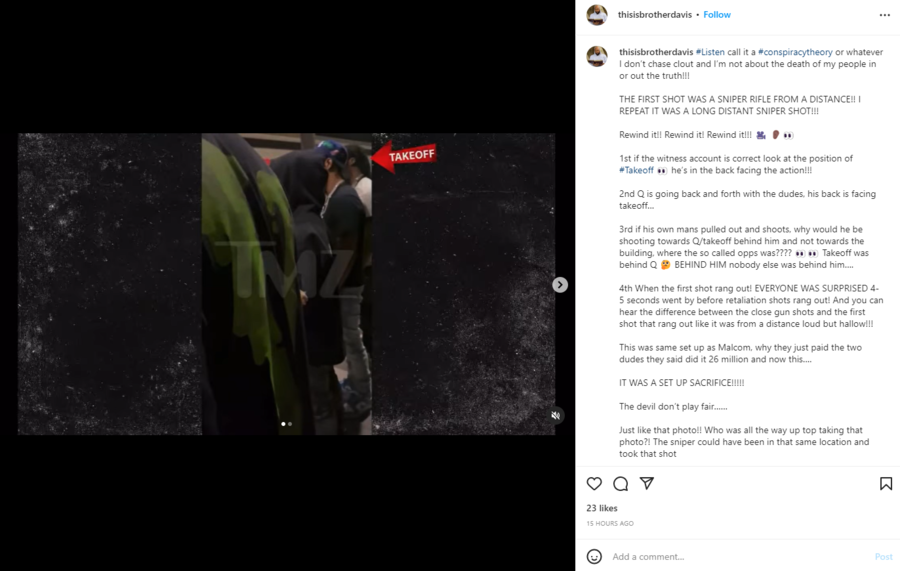 During a November 1, 2022, press conference about the fatal shooting in Houston, neither the Houston Police Department, nor city officials mentioned the possible involvement of a sniper.

Police homicide investigator Michael Arrington told the press that patrol officers had received a call earlier in the morning of November 1 about a shooting at 810 Billiards & Bowling, an entertainment venue. Arrington went on:

From there, we were notified that there was a single male who was shot and pronounced deceased on the scene on the third level, just outside the front door. We were also informed that two other individuals had reported themselves by personal vehicle to local area hospitals on their own; both of them with non-life-threatening injuries

Employees at 810 Billiards & Bowling told police that an argument that had broken out after a small private party at the entertainment center led to the shooting, Arrington said.

Online case information from the Harris County Institute of Forensic Sciences, which performs forensic and medical-examiner investigations in the Houston area, does not indicate whether or not the gunshot wounds Takeoff received were from a sniper. A screenshot of the information can be below: 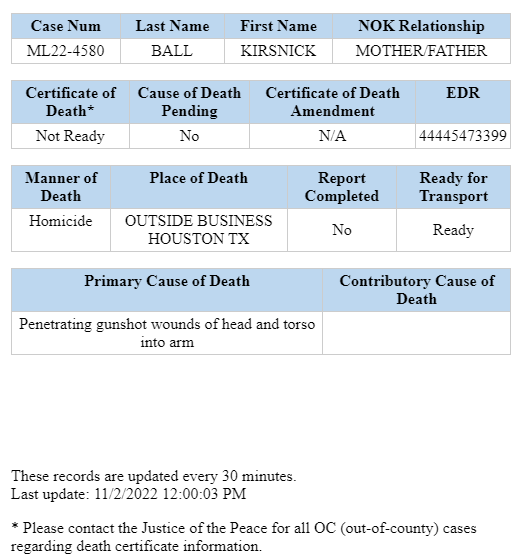 In a November 2, 2022, phone call with Lead Stories, Jodi Silva, a public information officer with the Houston Police Department, stated that, as of the date of the call, there was no indication that a sniper was involved in the attack.

The day of the rapper's death, Takeoff's management agency, Quality Control Music ,posted a statement on its Instagram account about the shooting. The November 1, 2022, statement said that Takeoff was killed by "Senseless violence and a stray bullet." A screenshot of the post can be seen below: 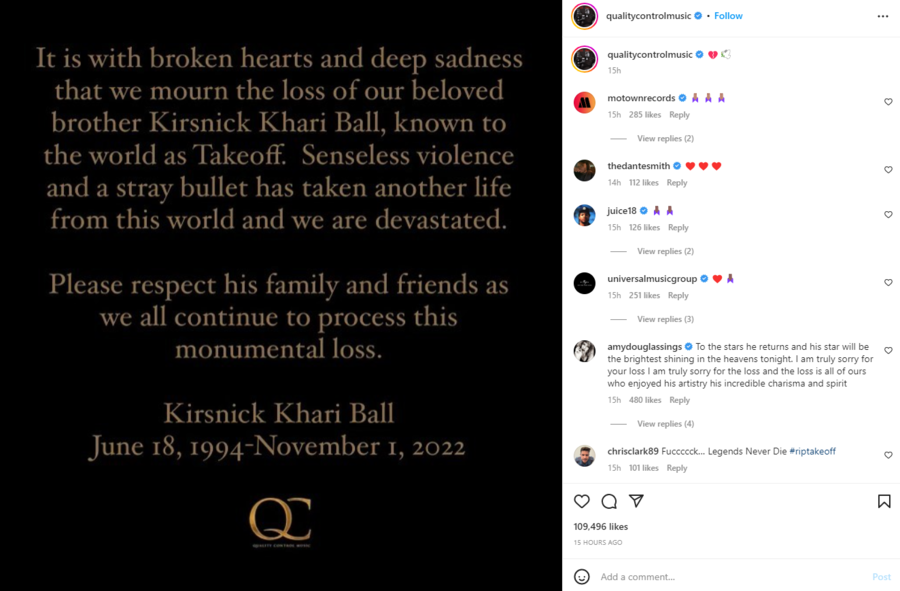 As yet, Lead Stories has not found any statement from the Houston Police Department confirming that Takeoff was killed by "a stray bullet." We will update this fact check if the Houston police corroborates that information.