Does California allow non-citizens to vote for congressional representatives, and does the state refuse to cooperate with the "Federal Election Integrity Program"? No, that's not true: California law does not give non-citizens the ability to vote in congressional elections. The California Constitution and the Secretary of State, who ranks as California's "Chief Elections Officer," specify that a person has to be a U.S. citizen, 18 years old and a resident of California to vote in California's elections. The state does not participate in a "Federal Election Integrity Program" because no such program exists.

The claim that California "is registering non-citizens to vote" came in a tweet originally posted in 2018, and reposted on Instagram (archived here) on November 2, 2022. It appears to derive from an account on Gettr, a social-media platform favored by political conservatives (previous Lead Stories articles on claims involving Gettr are here), that bears the name of the singer-songwriter Kid Rock. (The @KidRockOfficial account has been deleted from Gettr, and the post does not appear in its archived version.)

Text accompanying the repost on Instagram declares that "California voting system is complete trash, a scam perpetuated on legal Californians, legal US citizens. Someone needs to unfu*k the fu*kery!"

The reposted image itself reads:

Now that California is registering non-citizens to vote and has refused to cooperate with the Federal Election Integrity Program, all votes from California should be nullified and Federal Representatives from the state be removed from Congress. All in favor raise your hand ✋ 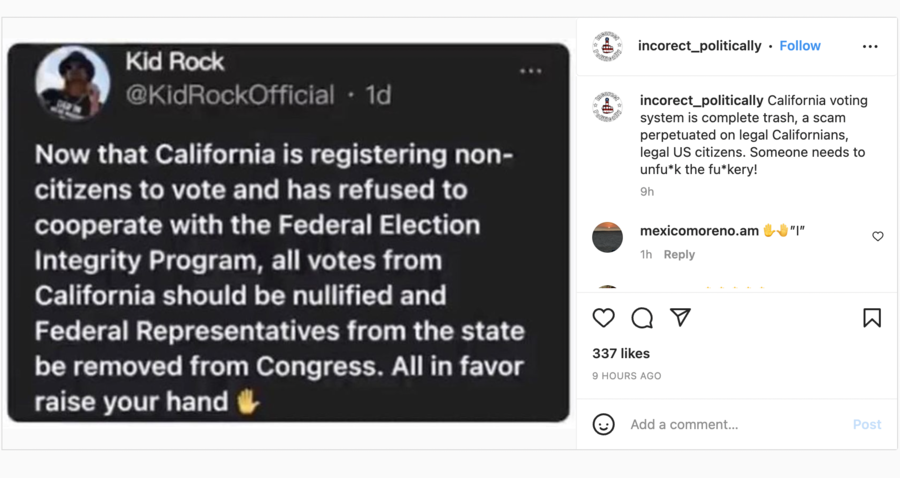 The post implies that California is registering non-citizens to vote in congressional elections, but does not cite a source for its claims.

The California secretary of state's website specifies that, to become a registered voter in the state of California, a person needs to be a U.S. citizen, a resident in California, and be at least 18 years on Election Day. A screenshot of the relevant page can be seen below: 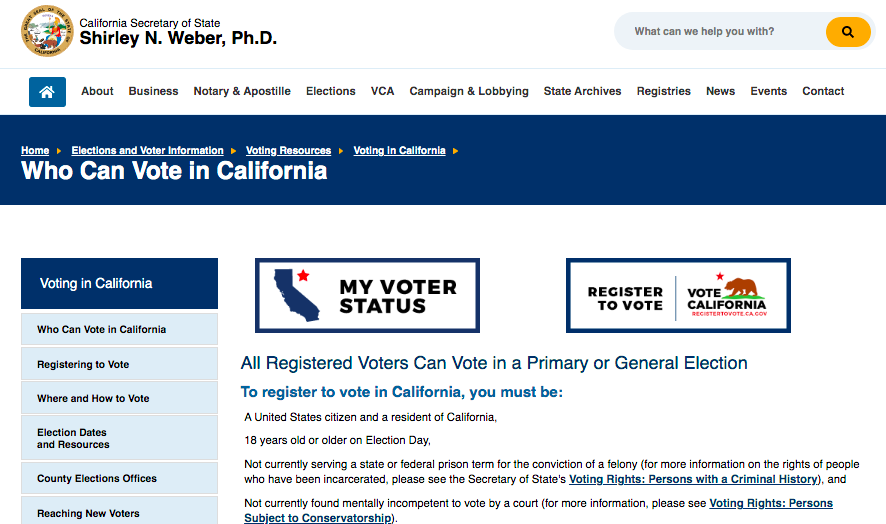 (Source: Screenshot of California Secretary of State/Who Can Vote in California taken on Wed Nov 2 21:38:20 2022 UTC)

Article II, Section 2 of the California Constitution, which outlines individual rights in the state, asserts that only a U.S. citizen who is a resident of the state and is 18 years old can vote in statewide elections. A screenshot of the relevant text can be seen below:

The closest thing to a Federal Election Integrity Program is the former Presidential Advisory Commission on Election Integrity, set up in 2017 by then-President Donald Trump. That commission declared it would "study vulnerabilities in voting systems used for federal elections that could lead to improper voter registrations, improper voting, and fradulent voter registrations, and fradulent voting." The commission disbanded in 2018 after finding no evidence of widespread voter fraud.

Politifact found that Ryan Fournier, the co-founder of the organization Students for Trump, in 2018 originally tweeted the claim that was repeated on Instagram on November 2, 2022.

Additional Lead Stories fact checks about voting in the U.S. can be found here, here and here.