Did Pope Francis write an inspirational quote that begins, "Rivers do not drink their own water"? No, that's not true: A Vatican spokeswoman told Lead Stories the quote was not authentic. The same quote is attributed to other spiritual leaders, and scholars say the quote probably has roots in an old Sanskrit proverb.

The claim appeared in an Instagram post on November 16, 2022, and versions have appeared on numerous other social media and religious sites. It reads:

Rivers do not drink their own water; trees do not eat their own fruit; the sun does not shine on itself and flowers do not spread their fragrance for themselves. Living for others is a rule of nature. We are all born to help each other. No matter how difficult it is...Life is good when you are happy; but much better when others are happy because of you. 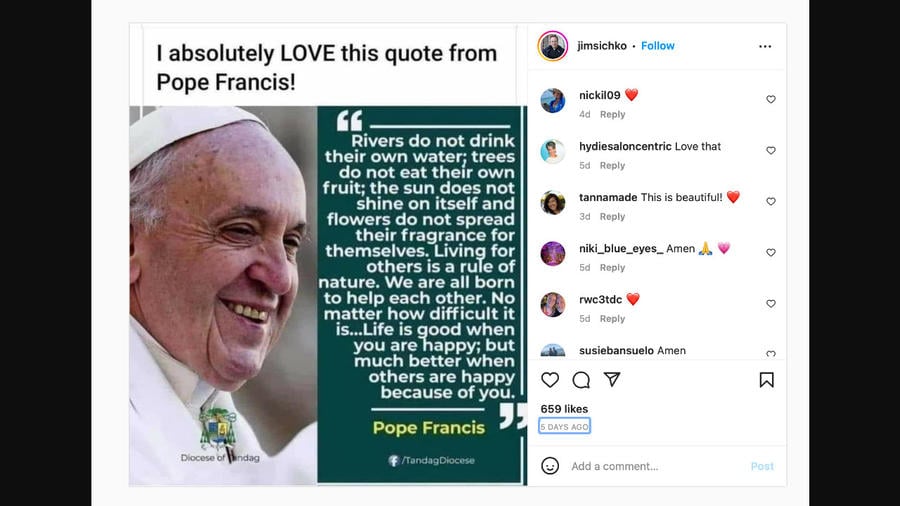 This same meme appeared on the Facebook page of the Roman Catholic Diocese of Tandag in the Philippines on April 12, 2020. Users on Twitter, Pinterest and several other sites have also attributed the quote to Pope Francis.

However, the pontiff did not write this homily. "It is not a text by the Holy Father, but one of the many phrases that, unfortunately, are attributed to him," said Nataša Govekar of the Vatican's Theological-Pastoral Office in an email to Lead Stories on November 21, 2022.

Pope Francis is not the only person who internet users have credited with this quote, or variations thereof. A Facebook user attributed it to Ghanaian Christian inspirational writer Israelmore Ayivor on January 10, 2019. In a 2018 book, pastor Stephen Kyeyune of the Multi-Cultural Family Fellowship Church in South Bend, Indiana, ascribed it to South Africa-based minister Alex Mavura. And Cardinal Charles Maung Bo of Myanmar called it "indigenous wisdom" in an October 2021 message published on the website of the River Above Asia Oceania Ecclesial Network.

Tom Ascheman, president of the Divine Word College, a Roman Catholic seminary in Epworth, Iowa, says the quote is actually from the Indian subcontinent. In an October 19, 2021, newsletter, he described the message as:

A beautiful quotation, popular in Spanish and English, [that] has roots in Hindu culture of the 14th century. The first verse reflects sentiments expressed in a Sanskrit proverb.

Ascheman's assertion is backed up by Gonzalinho da Costa, the pen name of amateur poet Joseph Ignatius B. Gonzales, a faculty member at Ateneo de Manila University in the Philippines. In a blog post on December 10, 2020, Da Costa noted that a website called Meditation Relaxation Sans Stress (archived here) published a version of the quote in 2009 -- four years before Francis became pope.

The quote appears to be based on a Sanskrit proverb, Da Costa said. His post links to one instance that appeared on the website of Hindu spiritual leader Mahavishnu Goswami Amrtavani on November 9, 2013. The English translation is:

Spanish- and English-language versions, such as the one in the Instagram post above, did not begin appearing online until 2017, Da Costa said.

In the comments section of his blog, Da Costa explained why he took the trouble to debunk claims of the pope's authorship:

Mass spreading of fake quotes is a symptom of a bigger, deeper, and very serious problem with dangerous and corrosive effects for democracies--fostering fake news, ignorance, lack of critical thinking, mob action and rule, propaganda, political manipulation, demagoguery, and authoritarian populism, among others.