The claim appeared in an Instagram post on November 29, 2022, in a meme showing Hanks in his role as cross-dresser Kip Wilson on the 1980s television show, "Bosom Buddies." It opened:

YOU'VE BEEN ENTERTAINED BY DRAG YOUR WHOLE LIFE. DON'T PRETEND IT'S A PROBLEM NOW. #TOMHANKS
Named on the Epstein flight list
I have a problem with people hurting children.

The text accompanying the claim read:

THE TRUTH HURTS
The gay agenda is real ... When you are a nut you dress up as a different gender. It's funny to some and programming to others. 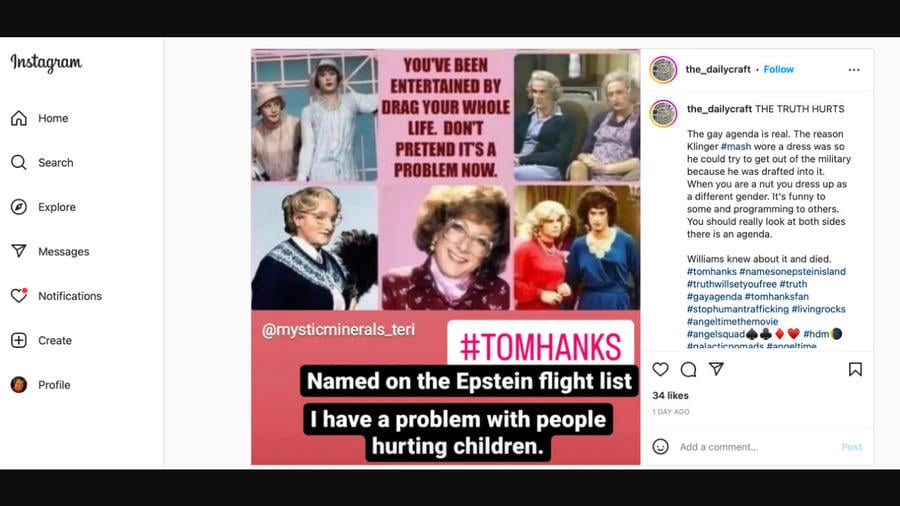 The charging documents against Epstein accuse him of exploiting minor girls as young as 14. In January 2015, reporters obtained the flight logs for Epstein's Boeing 727 jet after the logs were filed as evidence in the federal lawsuit against him. Lead Stories Editor-in-Chief Alan Duke uploaded the documents to Scribd, where they are available for public view.

The flight logs detail trips taken between 1997 and 2005 and include names of passengers such as former President Bill Clinton, Harvard Law School Professor Emeritus Alan Dershowitz and Virginia Roberts (now Virginia Giuffre), a woman who says she was one of Epstein's juvenile victims. Neither Clinton nor Dershowitz has been accused of criminal wrongdoing in relation to the charges against Epstein.

The log sometimes identifies passengers by their initials only. Lead Stories did not find Hanks' name or initials in the documents.

Epstein was found dead in his prison cell at the Metropolitan Correctional Center in New York City on August 10, 2019, from an apparent suicide.