Did the appearance of a name and number on pizza boxes delivered to former professional kickboxer Andrew Tate in a video he posted lead to his arrest by Romanian authorities on December 29, 2022? No, that's not true: Ramona Bolla, a spokeswoman for the country's Directorate for Investigating Organized Crime and Terrorism (DIICOT), said in a phone interview with Lead Stories that the theory Tate was detained thanks to the information seen on a couple of pizza boxes in the video is "funny, but has nothing to do with what actually happened."

The claim appeared on Twitter (archived here) on December 29, 2022. It opened:

Moment Andrew Tate receives pizza boxes with name and phone # on them which leads to his location for arrest & which he kept in front of him in video for entire minute. Thank you ⁦ 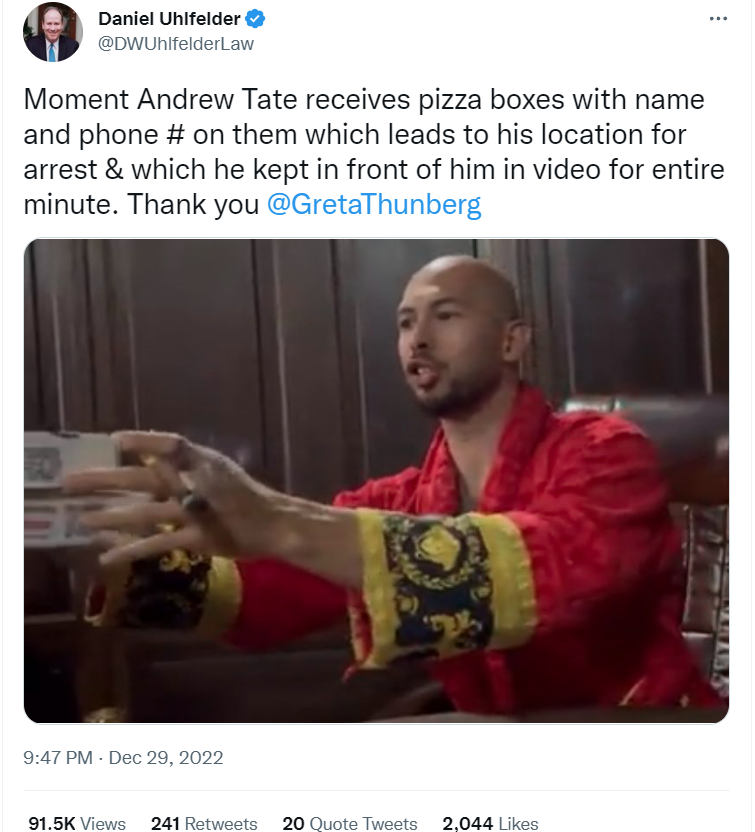 In a phone interview with Lead Stories staffer Ioana Burtea on December 30, 2022, Bolla said Romanian law enforcement had been investigating the case since April 2022, when Tate and his brother Tristan were questioned about holding two young women hostages in their Ilfov County residence. DIICOT posted a press release on its website at the start of the investigation. In the interim, the probe continued and expanded, leading to the arrest of four people on December 29, 2022.

Tate and his brother were arrested with two Romanian suspects on suspicion of human trafficking, rape and forming an organized crime group.

Leading up to his arrest, Tate was involved in a war of words on Twitter with 19-year-old climate activist Greta Thunberg. The back-and-forth included Tate bragging about his stable of cars and also featured the video with the pizza boxes (archived here). The tweets appear below:

yes, please do enlighten me. email me at [email protected] https://t.co/V8geeVvEvg

The world was curious.

And I do agree you should get a life ❤️ https://t.co/mHmiKHjDGH pic.twitter.com/SMisajQRcf

In the above video, Tate took a swipe at Thunberg when he asked somebody off-camera to bring him pizza and to make sure the boxes were "not recycled."

Following Tate's arrest, Thunberg hit back at him, which also helped perpetuate the claim that the pizza boxes lead to his arrest:

this is what happens when you don't recycle your pizza boxes