Is global warming caused by the solar system having two suns? No, that's not true: An astronomy expert and the National Weather Service told Lead Stories this claim is "completely false."

The claim appeared in a video on Instagram on November 28, 2022. The caption for the posted video read:

Just hanging out by the Great Spinx's paw dropping 4BIDDENKNOWLEDGE. Come to Egypt with me. LINK IN BIO.

The video features Billy Carson, a pseudo-scientific and historical writer. A banner on the video reads, "BILLY CARSON EXPLAINS GLOBAL WARMING." In the video, Carson says:

The reason for the warming is because we are living in a binary solar system. There's two suns. And so, we have another brown dwarf which is orbiting our yellow star, and every time it gets close on its approach, the gravitational waves ripple in, creates friction, warms up the cores of planets and moons, and creates global warming on every planet and moon in the entire solar system. Not just Earth. 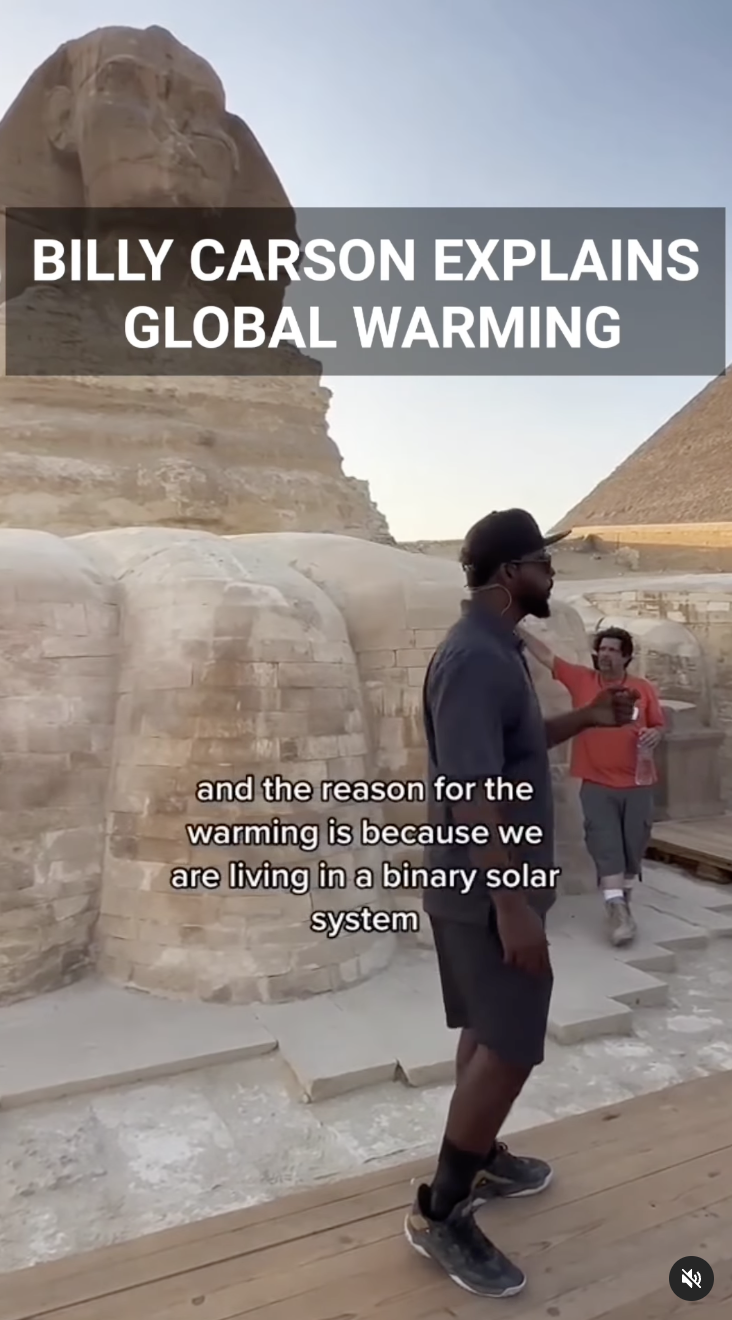 For an expert response to the claim, Lead Stories contacted the American Astronomical Society, which referred us to Travis Rector, chair of the Department of Physics & Astronomy at the University of Alaska Anchorage. In a December 1, 2022, email to Lead Stories, Rector confirmed that this claim is false:

It is true that scientists use ice core data to determine the Earth's temperature in the past. Using this technique, scientists have been able to study the temperature of the Earth going back several million years. During this time, the Earth's temperature has slowly changed between colder times (known as 'ice ages') and warmer times (known as 'interglacial periods.'). These variations are caused by slow changes in the Earth's orbit around the Sun, which are known as Milankovitch cycles. These cycles span over hundreds of thousands of years. But these cycles have nothing to do with climate change.

We know for certain that the climate change we are experiencing now is caused by human activity over the last hundred years. In particular, 90% of it is caused by the burning of fossil fuels- coal, petroleum, and natural gas. The burning of these fuels releases carbon dioxide into the atmosphere, which traps heat and makes the Earth hotter. For comparison, the planet Venus has an atmosphere made almost entirely of carbon dioxide, and as a result, it is over 800°F on its surface!

Monica Traphagan, the lead meteorologist at the National Weather Service, also told Lead Stories in a December 1, 2022, email that Carson's claim is false:

I can confirm that the scientific consensus is that there is only one sun in our solar system, so a second sun is not contributing to global climate change. The recent enhancement of warming is most likely due to humans contributing to the increase of greenhouse gases. More details can be found here: https://www.climate.gov/news-features/climate-qa/are-humans-causing-or-contributing-global-warming

Additional Lead Stories fact checks of claims related to the solar system can be found here.