Did Arizona Secretary of State Katie Hobbs' office contact Twitter to have posts removed to censor political opponents? No, that's not true: Hobbs' office asked the Center for Internet Security in 2021 to alert Twitter about an account that was making false claims about the state's voter information database.

The tweets that were flagged had nothing to do with the 2022 gubernatorial election or Hobbs' later opponent in the race for governor, Kari Lake. Neither Hobbs nor Lake had declared their candidacies for governor of Arizona when the Secretary of State's office sent its request to the Center.

The claim appeared on Instagram on December 4, 2022. It opened: 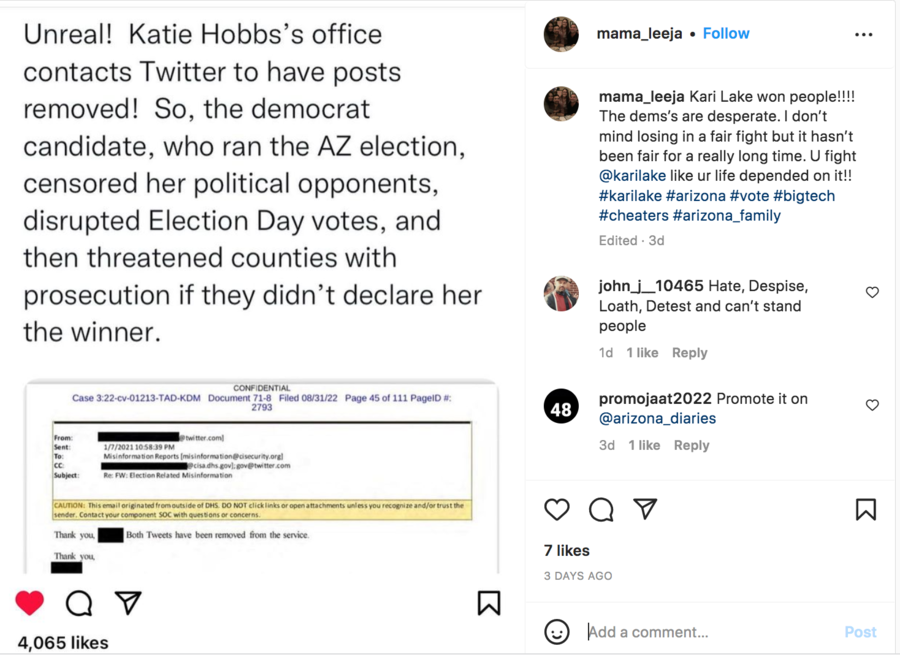 Unreal! Katie Hobbs's office contacts Twitter to have posts removed! So, the democrat candidate, who ran the AZ election, censored her political opponents, disrupted Election Day votes, and then threatened counties with prosecution if they didn't declare her the winner.

The post showed a redacted email, marked "CONFIDENTIAL," that only read:

But Hobbs, who did oversee the running of the 2022 elections in Arizona, did not censor her political opponents during the election by asking that these tweets be removed. The email cited in the Instagram post was released as part of a federal lawsuit (page 44-45) that alleges that the Biden administration colluded with social media companies to suppress free speech. (The email is not part of the emails released by Twitter CEO Elon Musk about Twitter's handling of a New York Post story about President Joe Biden's son, Hunter Biden.)

Rather, the email was a January 7, 2021, request from C. Murphy Hebert, the communications director for the Arizona secretary of state, to the Center for Internet Security, a nonprofit that acts as an intermediary for government offices on digital security matters. Hebert requested that the Center ask Twitter to halt misinformation about a voter database that is managed by the Secretary of State's office.

On December 8, 2022, Sophia Solis, deputy communications director for the Arizona Secretary of State's office, provided the email to Lead Stories: 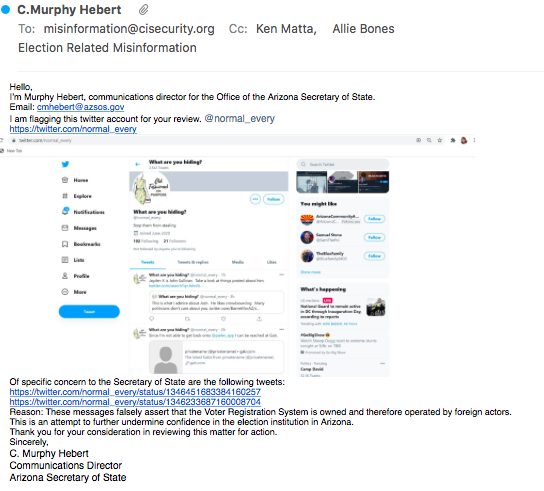 This email exchange is from January 2021, as shown in the screenshot. Not only was it taken entirely out of context, it has nothing to do with this year's midterm election. This is yet another example of conspiracy theorists trying to create chaos and confusion by casting doubt on our election system. It's unfair to Arizona voters and it's harmful to our democracy.

The AZ Mirror news site provided the text of one of the two tweets that alarmed the Arizona Secretary of State's office. The text in no way concerns Kari Lake, Hobbs' future Republican rival for governor of Arizona:

Hebert told Lead Stories via email on December 8, 2022, that Sutherland Global Services had a contract with the previous gubernatorial administration "to build the new Database."

After the Center for Internet Security's intervention, these tweets were deleted and the responsible account, @normal_every, was suspended.

At the time of this email exchange, neither Hobbs nor Lake had announced their candidacies for governor of Arizona. Lake announced her candidacy on June 1, 2021, several months after the Center for Internet Security sent its request to Twitter on behalf of the Arizona Secretary of State's office. Hobbs announced her candidacy the following day, June 2, 2021.