Did Arizona drag out midterm election ballot-counting for a week so that the tally would award the governor's race to Katie Hobbs -- the Democrat in charge of all state elections -- despite voters going "red in every other category"? No, that's not true: election results showed several other races in Arizona -- known for split-ticket ballots -- went blue in 2022. In addition to Hobbs, voters re-elected Democrat Mark Kelly to the U.S. Senate from Arizona and elected Democrat Adrian Fontes as secretary of state. Experts told Lead Stories vote counting can legally continue after Election Day. Also, while Hobbs is the current secretary of state, the person in that position can't control ballot counts.

The claim appeared in a video on Instagram on November 15, 2022. The speaker says:

Well, hello America. So, remember when I said Pennsylvania was gonna need an extra week to figure out who won the Congress seat there. And uh, turned out it didn't happen that way. Festus won the night of ... nah, I apologize, Pennsylvania. But Arizona, however, did exactly what I said Pennsylvania was gonna do. They pushed the election out an extra week. They weren't quite sure what they were doing. They couldn't quite get the votes to tally. And lo and behold : Katie Hobbs, the official who was over the election, has won the Gubernatorial seat over Kari Lake, beating the Republicans as a Democrat. (expletive) Do you mean to tell me Arizona voted red in every other category in their state but they elected a Democrat governor? And they needed a week to figure that out? That doesn't seem suspicious. Just f*in saying. 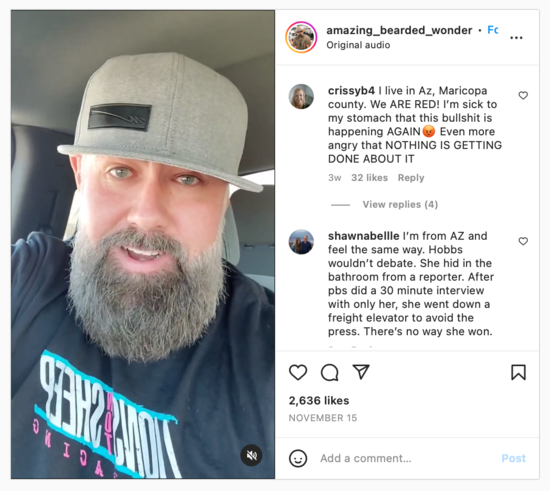 The post suggests that by counting ballots past the November 8, 2022, Election Day Arizona officials were either incompetent or manipulated the results to ensure Hobbs would defeat GOP candidate Kari Lake in the governor's race, even as Republicans were elected to other offices statewide.

The claim lacks understanding of Arizona's election laws and the voting behaviors of the state's electorate, according to experts who have spoken to Lead Stories for this and other fact checks of related election claims.

Tammy Patrick, a senior advisor to the bipartisan Democracy Fund, also spent 11 years as the federal compliance officer for the Maricopa County Elections Department in Phoenix. There's nothing suspicious about votes being counted after Election Day, she said. It happens in every election and is legal under the laws that govern state elections.

The deadlines for certifying county and statewide election results are set out in statute, and "neither of them is on Election Day," Patrick said. "Whether it's a close election or not, there is work that continues usually for at least two, and sometimes as much as three weeks, before an election is finalized."

State law says counties have between no less than six and no more than 20 days to certify their results and report them to the secretary of state's office. The law also sets the statewide canvass of all results for the fourth Monday after Election Day. In 2022, those deadlines were November 28, 2022 and December 5, 2022, respectively.

Arizona election law provides the window between Election Day and certification specifically to ensure that every vote submitted by mail or cast at voting centers, including provisional ballots, can be correctly processed, verified and counted.

It also sets out the rules for reporting results, allows time for the resolution of problems such as curing voter signatures and establishes protocols and contingency plans for other issues, such as the voting machine printer problems that arose in Maricopa County in 2022.

The law also requires a system of robust post-election audits, including random hand-count audits and voting machine reconciliation audits, to ensure the election's security and accuracy. Each step is something voters should want to be checked and double-checked before the state reaches a final, official result, Patrick said.

A lover of sports analogies, Patrick describes the process as being similar to a highly competitive sporting event, when both teams are within a whisper of a win and the clock is running down just as a player gets off a last shot or throws a Hail Mary pass. You can't call the game when the ball is in the air.

"You have to wait until that plays out to see what the score is," she said. "And that's what's happening here. If voters submitted their ballots on time, they need to be counted. I think people understand that, although they may not like it because it might mean their team loses."

Tensions can grow when the margin between winner and loser is close -- Hobbs beat Lake by only 17,111 votes -- prompting criticism of how election officials do their jobs, or claims that they are failing when compared to states with larger populations where the count and crowning of candidates appears faster, Patrick said.

It's also a fallacy to think that as secretary of state, Hobbs would have any control over ballot counts. The responsibility of conducting elections has fallen to the office since Arizona became a state in 1912, but the secretary's role is to certify the elections and set the policies and procedures for their execution based on state law.

"They don't count a single ballot," Patrick said of the secretary of state, adding that since 2007, Arizonans have also been able to watch their local tabulations centers process ballots online, 24 hours a day, seven days a week, providing a level of transparency that doesn't lend itself to criminal mischief.

It's also not true that Arizonans voted all red in 2022, although Hobbs' election did break the state government trifecta -- control of the governor's office and both chambers of the legislature -- which Republicans firmly held for the better part since 1992 on including 2009-22.

In fact, Arizonans have a long tradition of split-ticket voting, Paul Bentz, a longtime Arizona pollster and the senior vice president/research and strategy at the political consulting firm HighGround told Lead Stories for an earlier fact check of Arizona's midterm elections.

That's due in part to the overall makeup of registered voters, he said. State records show, about one-third of the electorate are registered independents who like balanced government and pick and choose their candidates based on priorities other than political affiliation.

Records from the secretary of state's office show Arizona has 4.1 million registered voters. Just under 2.6 million -- about 62 percent -- of Arizonans cast ballots in 2022, and Republicans did not fare poorly, despite losing the races for U.S. Senate, governor and secretary of state.

According to the state's official canvas report from December 5, 2022, Republicans were elected to six of the state's nine U.S. House seats and secured four of the top statewide races: state treasurer, superintendent of public instruction, mine inspector and corporation commissioner.

Republicans also maintained control of the state Legislature, winning 16 of 30 seats in the Senate and 31 of 60 seats in the House.