Did then-President Barack Obama put this painting into storage in the White House in 2014 and has President Joe Biden put it up for auction? No, that's not true: This painting, "Washington Crossing the Delaware," was on loan from a private collector who decide to sell it to other private collectors. While it hung in the White House from the 1970s until 2014, it was never White House property and no government officials were involved in its removal and sale.

Please say what you think about this:
This is a 200+ year old painting of George Washington crossing The Delaware. It hung in The Peoples House, The Whitehouse for many years, survived the fire of 1812...etc.
Obama had it taken down and put into storage in 2014.
Biden is putting it up for auction where it's expected to be bought for at least $20m.
I don't know how they can even legally do that and who gets the money?! That's The American Peoples property. 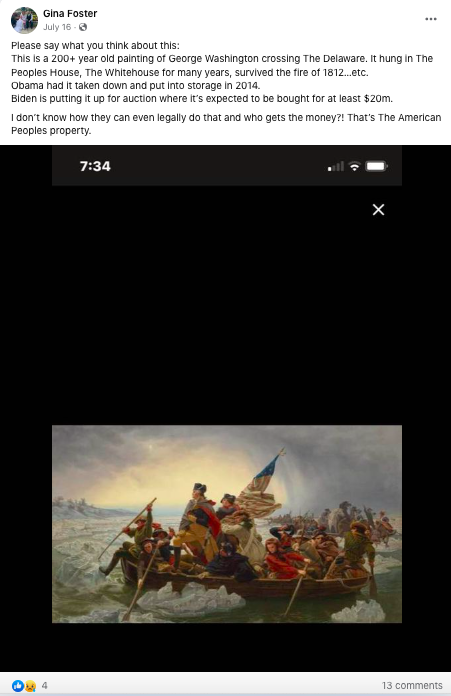 This painting, "Washington Crossing the Delaware," one of three versions painted by Emanuel Leutze, is among the most well-known paintings to hang in the White House on a long-term loan. It was there from 1979 through President Obama's first term on loan from an anonymous collector. It was never U.S. government property.

The painting is one of three versions. The first one was destroyed in an air raid in World War II in Germany, the second hangs in the American Wing at the Metropolitan Museum of Art in New York and this one hung in the White House.

According to this April 22, 2022, article in Barron's newspaper:

This version of Washington Crossing the Delaware had hung in the White House for 35 years until 2014, appearing several times in the reception room to the West Wing. It had been on loan from an anonymous collector before it was sold privately to Mary Burrichter and her husband, Bob Kierlin, founders of the Minnesota Marine Art Museum.

Christie's published the history and significance of the painting here, calling the painting "the image that defined America." It also said

Leutze began painting the first version of Washington Crossing the Delaware in 1849 -- 73 years after the battle. Working from his studio in Düsseldorf, the artist was undoubtedly influenced by the political upheavals happening across Europe, which prompted comparisons to the American Revolution. In total, Leutze and his studio assistants -- including the up-and-coming young artist, Eastman Johnson -- produced three known versions of the famed composition.

It hasn't been on display at the White House since 2014. The painting was sold privately in 2014 to Mary Burrichter and her husband, Bob Kierlin, founders of the Minnesota Marine Art Museum. The painting was displayed at that museum from 2015 and then was sold in May 2022 to another private collector who was not identified. It was offered in the 20th Century Evening Sale on May 12, 2022, at Christie's in New York. Its pre-auction sale price was estimated to bring between $15 million and $20 million. It sold for more than $45 million -- with the sale occurring more than two months before the July 16, 2022, post on Facebook.