Did former President Ronald Reagan deny that 6 million Jewish people were killed in concentration camps during World War II? No, that's not true: There is missing context to this video. A transcript of this event shows that Reagan is answering a question about the actions of the leader of South Vietnam during the Vietnam War.

The implied claim appeared on Instagram on December 2, 2022. In the video, Reagan stated:

I challenge your history again. There is absolutely no record that six million people were put in concentration camps. They only had 16 million to begin with.

Although there is no caption on screen or in the post explicitly stating that Reagan is denying the Holocaust, the words "six million" and "concentration camps" are commonly used in connection with events that happened during World War II. This clip by itself could easily lead people to infer Reagan is speaking about the Holocaust.

The clip in the Instagram post has been removed from its original source. It is from a CBS News program, "The Image of America and the Youth of the World," which originally aired on May 15, 1967. At this time, Reagan was the governor of California. Sen. Robert Kennedy was part of this program also. At the time the war in Vietnam was being hotly debated nationally.

The JFK Library has a transcript of this event on its website that shows Reagan was not speaking about the Holocaust. Before his answer, a student asks him:

I'm sorry, are you saying that you approve of the activities of the Diem regime?

That question can be found here. The Diem regime was when President Ngo Dinh Diem oversaw South Vietnam from 1954-63.

Reagan asks what activities the questioner means, and the student asks if he approves of the Diem regime putting 6 million in "forced prison camps." Reagan then says what's in the Instagram clip.

The whole exchange can be seen in this screenshot, with highlighting by Lead Stories: 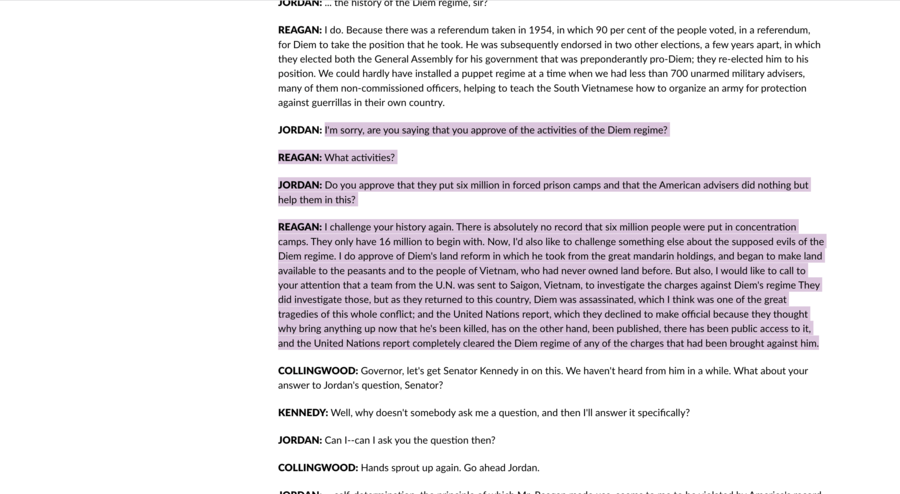 C-SPAN also has a video archive of this event, along with a transcript, here.