Did Qatar ban the German team's plane landing there for the FIFA World Cup because of the aircraft's inclusive logo and mural? No, that's not true: The plane left Frankfurt, Germany, and landed in Muscat, Oman, for training in mid-November. The German team boarded a smaller plane from there to fly the shorter distance to Qatar for the World Cup.

The German National Team's official airline Lufthansa, the flag carrier of Germany, changed the team's plane name to "Fanhansa" for the fans of the World Cup worldwide and put a logo saying "Diversity Wins" and a mural of a diverse group of people on the side of the aircraft.

Qatar refuses to receive the German national team's plane, which bears the [email protected] logo, which forced them to return the plane to the airport of the Sultanate of Oman, and it was replaced by another plane that did not bear any logo.

I am not partial to this country, and I do not know anyone in it, and I have not visited it before, but honestly, hats off in respect for this Muslim country.

Qatar is making history 👏 Qatar is the pride of the Arabs ♥️ ♥️ 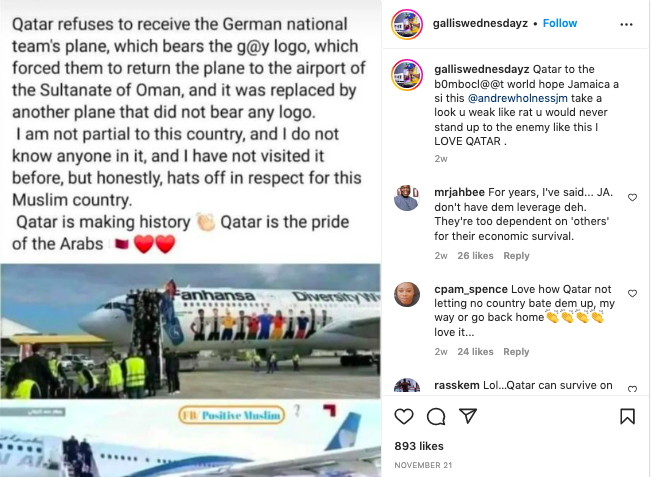 Lufthansa posted this video on YouTube on November 14, 2022, showing a crew applying the name, logo and mural to the German National team plane as a symbol of inclusion. The post says:

We are proud to be departing with the German national team DFB in our special A330 - The aircraft will be sporting a special livery that sends a clear message to the world: Diversity Wins!

We stand for openness, tolerance, diversity and bringing people together. Our company enables customers from all nations and cultures to connect, and welcomes everyone aboard, regardless of gender, age, ethnicity, religion, nationality, identity or sexual orientation.

Now we are taking this same message - That Diversity Wins! - aloft and and around the world, through the special 'Fanhansa' livery which it has devised together with illustrator Peter Phobia.

This Getty Images photograph taken on November 14, 2022, with the dateline, Frankfurt Am Main, Germany, shows the team before departing for what the caption says is "the Pre World Cup Training camp in Oman." The caption also says:

Germany will stay in Muscat, Oman for a training camp before they travel on to Qatar for the FIFA World Cup Qatar 2022.

According to this webpage on the official German National team's website, translated from German into English using Google Translate, the different flights were decided jointly by the team and the airline for "reasons of sustainability," which is a term often related to climate change and other environmental concerns. The page describes the preplanned flight path as well:

... the German national team is traveling by scheduled flight to its World Cup training camp in Oman today. After traveling from Frankfurt to Muscat with Lufthansa as the official airline of the German national team, the team of national coach Hansi Flick will fly from Oman to the World Cup host country Qatar on Thursday, also for reasons of sustainability with a regional airline. An onward flight with Lufthansa would mean empty flights from Germany to Muscat and back from Doha ...

Despite beating Costa Rica, Germany was knocked out of the 2022 World Cup on December 1, 2022.

Other Lead Stories articles concerning the World Cup can be found here and here.