Is ingesting Borax a reliable treatment for parasites that can yield "good results"? No, that's not true: Borax, which is often used as a cleaning product, can cause nausea and vomiting if ingested or inhaled. In higher doses, it can cause organ damage. It is banned as a food additive by the Food and Drug Administration (FDA). Recommending the use of Borax to treat parasites is not supported by any medical or scientific practices, according to a professor in the infectious diseases division at Johns Hopkins Medicine.

The claim appeared in a video (archived here) on TikTok on January 14, 2023. Its captions were:

This is what it looked like at the time of the writing of this fact check: 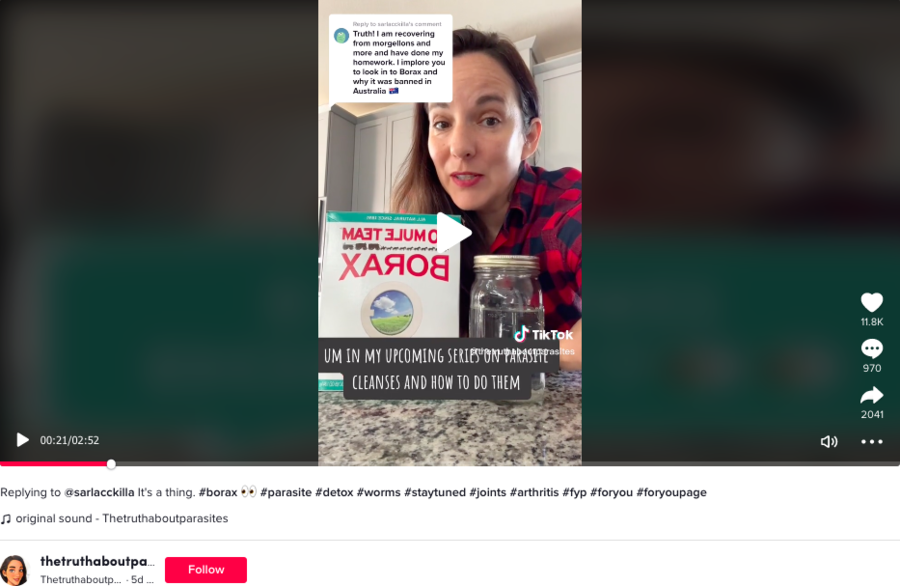 As the woman in the video claims, borax and boric acid are often mistaken for each other, but they are not the same. Borax looks like a white powdery substance and is from a combination of boron, oxygen and sodium. It's often found in mineral form in dry lake beds in California's Death Valley. Boric acid is from the same chemical compound and looks similar. However, borax is mainly used for household cleaning and laundry, while boric acid is used to kill insects.

This claim is about ingesting borax to clear the body of parasites and has nothing to do with boric acid and its use as a pesticide.

The woman speaking in the video says she has created a borax solution herself for parasite cleanses and has ingested borax before. A box of the 20 Mule Team brand of borax is visible. She appears to be recommending adding water to the borax and ingesting it in a series of internal cleanses.

The 20 Mule Team Borax website warns, however, that its product must not be ingested:

Meanwhile, the small text graphic on the video says in part:

Truth! I am recovering from morgellons and more and have done my homework

Dr. Stuart C. Ray, a professor of medicine and oncology in the division of infectious diseases at Johns Hopkins Medicine, which combines Johns Hopkins University's medical school and healthcare facilities, replied by email to a Lead Stories query about the claim on January 18, 2023. He first addressed how to treat Morgellons disease, an unexplained skin condition that some medical professionals say is not physical, but a delusional belief that an individual's skin is infested with parasites.

He then wrote about the claim that ingesting borax kills parasites:

It seems irresponsible to casually suggest that ingesting borax, a cleaning product with serious risks of organ damage if ingested, would help. Such a recommendation is not based on sound medical evidence or scientific practice. Ingesting borax can be dangerous.

The FDA has banned borax as a food additive.
Lead Stories also has debunked a claim that turpentine oil can be used as a remedy for parasites.