Did country singer-songwriter George Strait have a "tragic end" on December 31, 2022? No, that's not true: Strait's verified Instagram account posted content as recently as January 10, 2023. There have been no news articles or statements from Strait's team that would lead fans to believe this.

The claim appeared on Facebook on December 31, 2022. The post is a picture of Strait on stage with the caption:

His whole future is at stake! Thousands of viewers are saddened by today's news. A Tragic End For George Strait Today 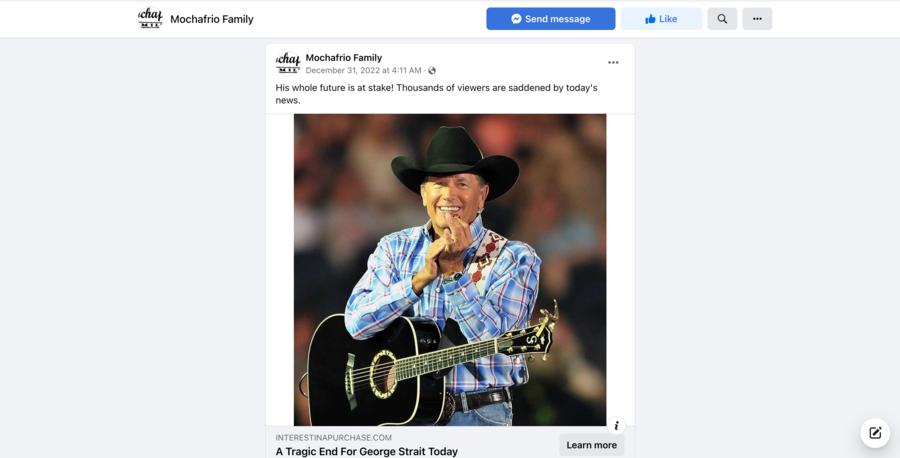 The URL, interestinapurchase.com, linked in this post leads to either a page supposedly selling T-shirts or an article on why the pharmaceutical industry wants George Strait suspended from all music platforms. According to this article, Strait had to stop touring because the arthritis in his hands got so bad. But according to Strait's website, he has announced a 2023 tour of six stadium performances.

The rest of the article is an advertisement for a brand of CBD gummies. There is no evidence that Strait has endorsed or spoken about any CBD gummies.

A Google News search for "George Strait tragic end" turned up no results at the time of writing.

Country Music Television wrote about his upcoming tour on January 10, 2023.

Lead Stories has contacted Strait's publicist, we will update this article if we receive a response.

Similar claims that Lead Stories has debunked about celebrities can be found here and here.