Did newly elected House Speaker Kevin McCarthy tweet a poll asking Americans if he should step down as the "head of Congress"? No, that's not true: A review of McCarthy's official Twitter account found no such tweet, and there is no single "head" of the U.S. Congress, a title that is not used by members of Congress.

The claim appeared on Twitter on January 4, 2023, under the title "crazy that he tweeted this." It opened:

Should I step down as head of Congress? I will abide by the results of this poll.

Here is how the tweet appeared on the day of writing: 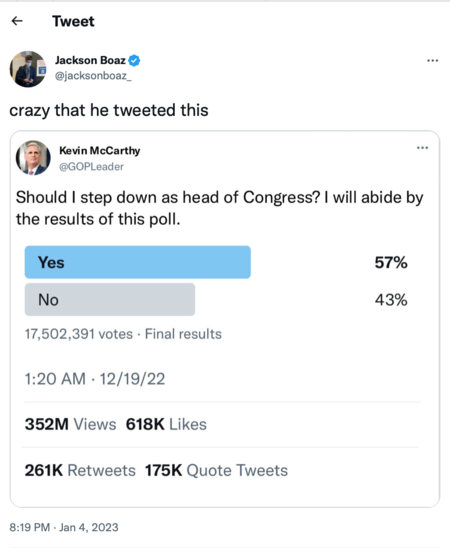 The post appears to be a retweet of a December 19, 2022, post. It includes what purports to be the final polling results, which show 57 percent of respondents answered "yes" to the query and 43 percent voted "no." The post claims that 17,502,391 votes were cast in the poll.

A review of McCarthy's official Twitter feed, including archived tweets, found no such post on the day the original post was made or in the days since. 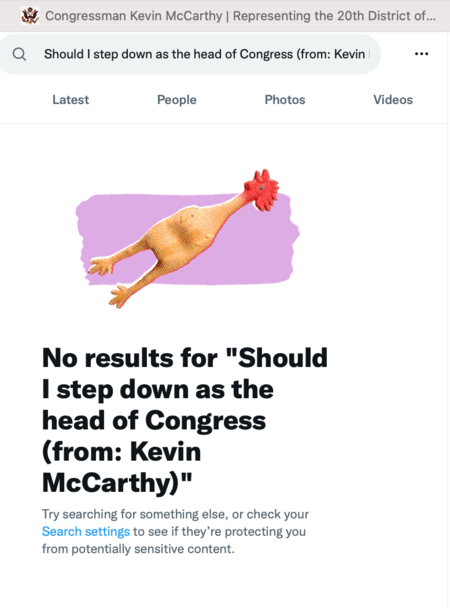 Even if McCarthy, who represents California's 20th District, had written such a post, he was not the House speaker at the time; he was not elected speaker until the early hours of January 7, 2023.

Furthermore, there is no single head of Congress. Article 1 of the Constitution, which created the Congress, establish a bicameral body with a House and Senate. Each has its own structure and leadership.