Were "electrically charged rocks" discovered in the Democratic Republic of Congo in January 2023? No, that's not true: No such discovery had been formally announced in the scientific community as of this publication, and a geology expert told Lead Stories that there are no known minerals "that produce electricity naturally without adding energy to the system." The rock in the video appears to be pyrite, which is a known semiconducting mineral that can conduct an electrical current under the right circumstances.

Electrically charged stones discovered in the Democratic Republic of the Congo. 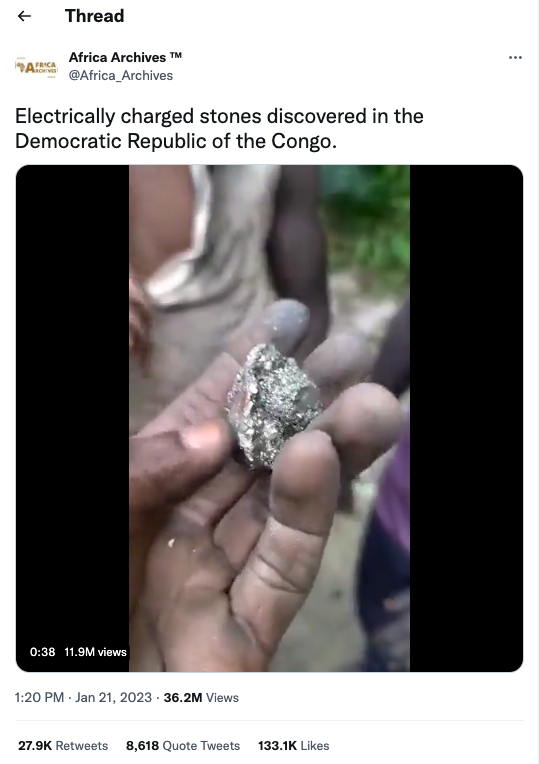 The video appears to show two electrical wires that, when connected to a gold-colored rock, complete an electrical circuit that turns on a small light bulb. The implication, also suggested in posts published on Instagram and YouTube, is that this supposedly newly discovered rock could "aid in making phones, laptops and electric cars."

Jack Ridge, chair of the Earth and climate sciences department at Tufts University, told Lead Stories by email on January 25, 2023, that "there may be rocks that can conduct electricity, but they can't generate it."

No such discovery had been formally announced in the scientific community as of this publication. Anthony Love, a researcher with the Ask a Geologist program at Appalachian State University, told Lead Stories in an email sent January 25, 2023, that it would most certainly have been announced had such a novel breakthrough occurred.

"The short answer is many minerals can conduct an electrical charge. There are not minerals that produce electricity naturally without adding energy to the system. I would be wary of 'discoveries' announced on social media," Love said.

He speculated that the rock in the video is likely to be pyrite, also known as "Fool's Gold." Pyrite is a semiconducting mineral that can conduct electricity between conductors (like metals) and nonconductors (like ceramics). When given a small amount of electricity, pyrite can act as a conductor, or bridge, between two connected electrical cables to complete a circuit that lights the bulb.

The rock itself is not electrically charged nor does it generate electricity. Rather, it helps to facilitate the spread of electricity between two conductors.

In 2019, researchers described in the peer-reviewed journal Proceedings of the National Academy of Sciences mineral coatings found on rocks in northern China that harness the ability to turn sunlight into electricity. In a news statement at the time, the scientists noted that these surface coatings consisted mainly of manganese and iron oxides, which yielded detectable photocurrents.

However, the rock these minerals were coated in did not exhibit any sort of electrical currents. The researchers attributed the electrical response to minerals found in these coatings, which included solar light-responsive semiconductors like birnessite, hematite and goethite.

The Twitter account that originally posted the video did not identify the rock or mineral featured, nor did it state how or why the light lit up. Africa Archives is self-described on Twitter, Instagram and Facebook as being dedicated to: "Africa historical, cultural & photographic records. Telling the Africans history and stories."

Lead Stories contacted Africa Archives for more information about the video and will update this article should we receive a response.