Did "T-esla" release new cryptocurrency software designed to "cure poverty all over the world"? No, that's not true: This deceptive ad is not associated with Tesla or Elon Musk, the co-founder of the automotive and clean energy company. The scam also is falsely using the name Quantum Ai, a separate company that operates a cryptocurrency trading system not affiliated with Tesla or Musk.

The claim appeared in a post and video on Facebook published on January 6, 2023, under the title "T-esla is open to everyone for the first time." A narrator in the video says:

Elon Musk and the Dubai billionaire have unveiled new software called 'Quantum Ai.' They have already invested more than $54 billion in this project. The main objective of the project is to cure poverty all over the world. The new algorithm earns from $2,000 in five hours on the growth and fall of cryptocurrencies. The software works automatically and does not require any human action. Elon does so many things for the people and this is just one of them. Join from anywhere in the world. Click 'LEARN MORE.' 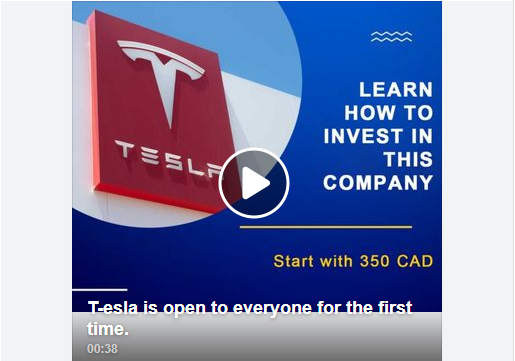 When viewed on a desktop, this post does not have any additional links for the user, but, when viewed on a mobile phone, there is a link to LAKEHURONHOME.COM. Clicking on the "Learn More" button takes the user to a fake page for the Toronto Star newspaper, featuring Musk and a "SPECIAL REPORT" on the investment scheme. This is what the page looked like at the time of writing: 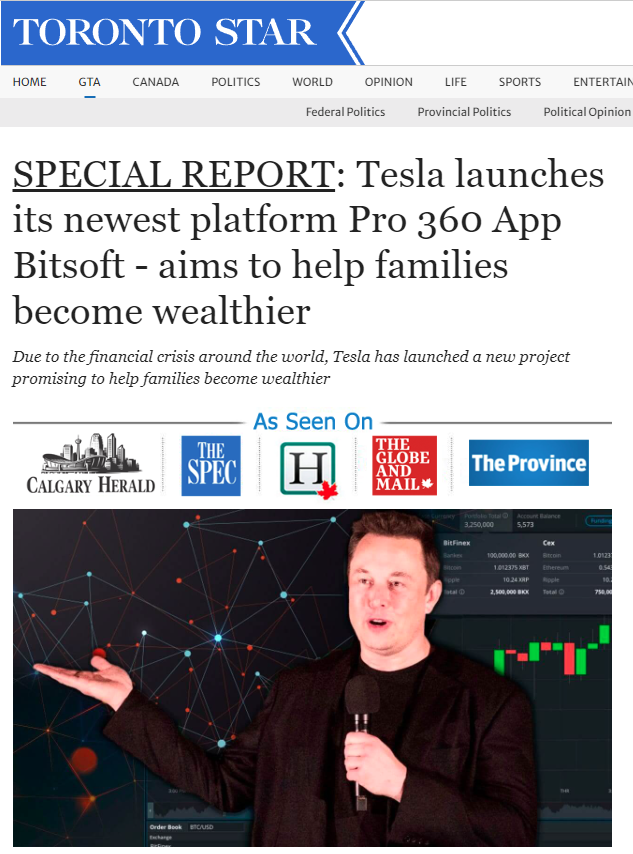 The faux special report then encourages readers to sign up for their crypto app and suggests time is running out for them to take part. Here's an example:

(Tip: Even if you don't decide to invest any money, I recommend signing up now because it's free and registrations for Canadian residents could end at any moment)

The 37-second clip appeared on the Facebook page for Giftery Shop, which lists its location as Karachi, Pakistan. After the opening screen that suggests investors can get started for as little as $350 (Canadian), the video shows Musk talking to a man the narrator identifies as a Dubai billionaire. Here's a still image from the clip:

Taking a still shot from the video and doing a Google Images search, Lead Stories found that the clip is from the World Government Summit in Dubai, United Arab Emirates, on February 14, 2017. The man Musk is talking with is the UAE minister of cabinet affairs, Mohammad Al Gergawi. None of the reports surrounding the event suggests the men talked about a $54 billion cryptocurrency software project to cure poverty.

Located in the upper right-hand corner of the video is the logo for the cryptocurrency trading company Quantum Ai. The original video does not include their logo, and the company's website makes certain to distance them from Musk. Their " FREQUENTLY ASKED QUESTIONS" section says:

We do not disclose the identity of our clients, and hence the rumour is not in any way associated with us. Elon Musk hasn't said anything about Quantum AI. The claims that he has invested in us are, therefore, fake news.