Does a video featuring actor Tom Hanks prove he is linked to a Hollywood child trafficking conspiracy? No, that's not true: The video is a clip of Hanks acting in a skit that aired on "Jimmy Kimmel Live!" in 2011. The social media account that made the claim describes itself as satirical.

The claim appeared on Instagram on January 4, 2023, in a video showing Hanks clapping ecstatically and embracing a little girl in a big-hair wig and hot-pink dress after she steps down off a stage. The caption opened:

The text above the footage in the post similarly read:

TOM HANKS NOT TRYING TO HIDE IT 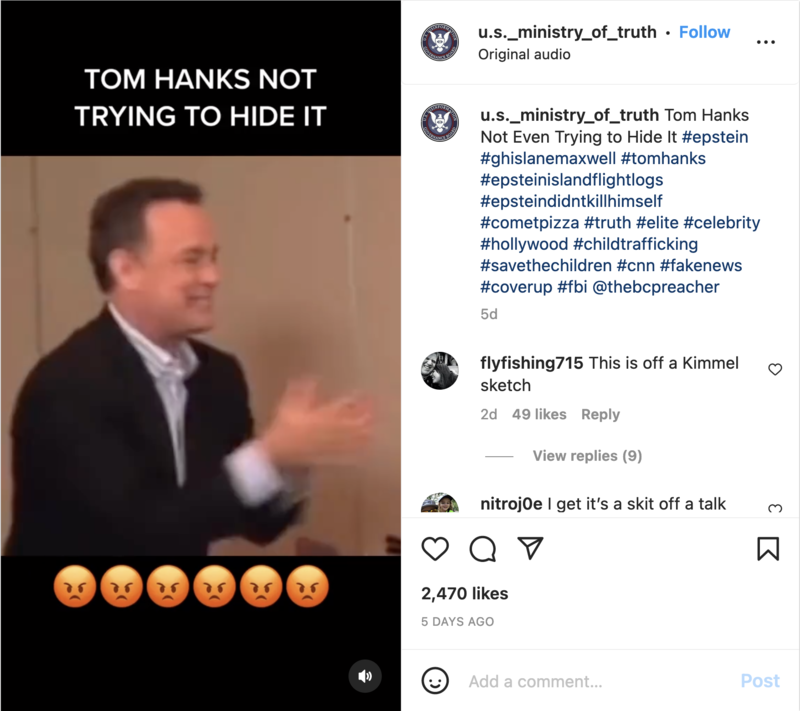 The U.S. Ministry of Truth Instagram page bio, where the claim was found, is self-described as a "Satire/Parody" account.

The video clip in the post was taken from a February 2011 YouTube video titled "Toddlers & Tiaras with Tom Hanks." The scene in the post is at the 5:22 mark in the YouTube video. The full video parodying child beauty pageants and pageant-obsessed parents originally aired on "Jimmy Kimmel Live!" According to a March 2, 2011, San-Diego Union Tribune article, the skit went viral.

Lead Stories has debunked other Tom Hanks claims: We reported he was not on Jeffrey Epstein's flight list and did not flee to Greece to hide from prosecution.

Lead Stories contacted representatives of Hanks about the child-trafficking claim and will update this fact check if any responses are received.