Is the "world's largest ship" slowly sinking? No, that's not true: The vessel at the center of this claim is not the largest ship in the world, nor has it sank. A widely viewed Facebook video featured footage of MV Modern Express, a Panama-registered cargo ship that was successfully towed and recovered in 2016 after nearly running aground during a storm.

The claim originated in a 45-second video shared on Facebook on January 17, 2023. The caption of the post read:

Here is how the video appeared at the time of this publication: 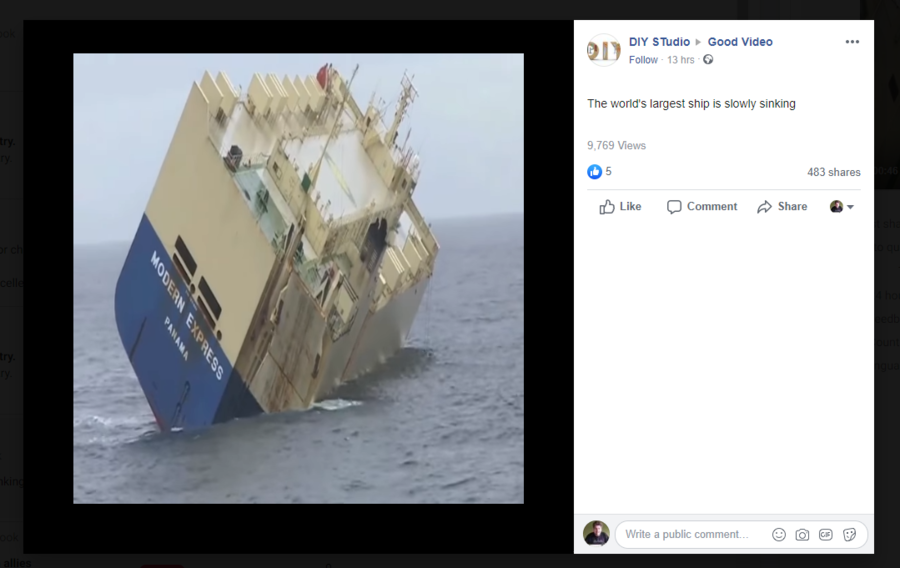 Shown in the video is MV Modern Express, a 538-foot ship that made headlines in January 2016 after taking on water during a storm, The Associated Press reported at the time. News videos similar to the clip used in the Facebook post were also published in 2016 on the YouTube channels of EuroNews and Salvamento Marítimo, a Spanish-operated search and rescue agency.

According to the risk management company and maritime industry advisor DNV, the Modern Express was carrying 3,600 tonnes, though some sources report the load to have been 1,000 tonnes, of construction machinery and timber from West Africa to France when it was caught in a severe storm in the Bay of Biscay off the Spanish coast. The DNV case study continues:

Battered by heavy seas and swells, the vessel developed a 40-degree list and lost engine power. The captain sent out a distress signal and the vessel's 22 crew members were safely evacuated by two Spanish search and rescue helicopters, leaving 'Modern Express' to flounder in extreme weather and in danger of capsizing.

Shortly after the crew was evacuated, the 'Modern Express' began drifting towards the French coast. Because of this development, the participating Maritime Rescue Coordination Centers decided to arrange for the rescue operation from the French Prefecture Maritime in Brest. Subsequently, France assumed responsibility for coordinating the rescue operation...

Listing is described by the Pearl Harbor Memorial as being when "a vessel takes on water and tilts to one side." After deeming the Modern Express seaworthy, meaning that it likely would not sink during a rescue mission, personnel towed the vessel with tugboats and eventually secured it to a dock with specialized equipment. To right the ship, the team used counterweights and " a nine-step sequence using external pumps and the ship's tanks to gradually right the ship," explained DNV. Modern Express was successfully towed to shore, according to reports.

It should also be noted that Modern Express is not, nor has it ever been, the "world's largest ship." As of September 2022, the Ever Alot containerized cargo ship owned by Taiwan-based Evergreen Marine topped a list of the world's biggest ships, at a length of 400 meters (1,312 feet -- more than twice the length of the Modern Express). The same list put Royal Caribbean Group's Wonder of the Seas as the largest cruise ship at 1,188 feet in length -- again, more than twice the length of the ship in the video.