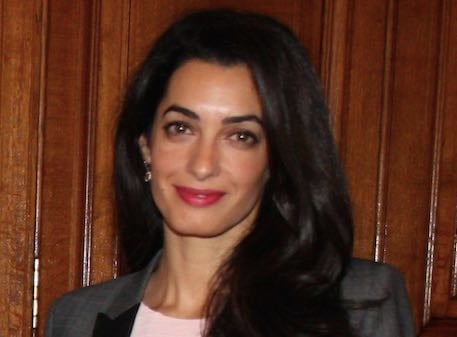 Before Amal Ramzi married actor George Clooney she was known as a human rights lawyer. Although she is often pictured in tabloids traveling with her husband, the 37-year-old Brit's latest noteworthy achievement is the representation of Mohamed Fahmy, a Canadian-Egyptian journalist\ for Al-Jazeera.

When her client and two other journalists were convicted in Egypt of "spreading false news" and sentenced to three years in prison, she said the verdict "sends a dangerous message" and there was "no evidence to sustain any of the charges."

The Associated Press tweeted a link to its story about Amal Clooney's reaction -- which must be limited to 140 characters -- referring to her only as "actor's wife" without her most-relevant credential of human rights lawyer: "Amal Clooney, actor's wife, representing Al-Jazeera journalist accused in Egypt of ties to extremists"

The perceived sexist slight stirred up a Twitter frenzy that made Amal Clooney a globally trending term.

Amal Clooney is accomplished as hell and you demean her work and lower her down to only her relationship with her husband?

AP got the message, changing the headline.

Appears @AP has fixed its headline to recognize Amal Clooney for her accomplishments vs her husband. @tcwittes https://t.co/GYN4xUPGoo

@LeadStoriesCom @UKIPolizer but she is married to clooney.thats true whats the problem. feminist are touchy

@LeadStoriesCom @Gamergatolizer Who would even know this person if not for Clooney? It's a matter of fame; nothing else.

@LeadStoriesCom @Timesolizer Simply a reflection on our times, in which "fame" is measure of a person. #OtemporaOmores

Lead Stories' Trendolizer constantly scours social networks for the hottest trending content about Amal Ramzi Clooney and her actor husband (what's his name?) Scroll down to see the latest.