Is the new Russian website "War on Fakes" a real and reliable fact checking website run by "experts and journalists"? We have questions. The site appeared to spring up almost overnight in early March 2022 in the wake of the Russian invasion of Ukraine, and started publishing articles in several languages meant to look like fact checks, often accompanied with images overlaid with bright red "Fake" labels. However the site does not seem to follow several of the principles outlined in the Code of Principles of the International Fact-Checking Network, an organization grouping most of the worlds fact checkers (including Lead Stories).

The site has a "Manifest" on the front page that reads:

Welcome to the "War on Fakes" project. We are the owners and administrators of several Russian non-political telegram channels.

We don't do politics. But we consider it important to provide unbiased information about what is happening in Ukraine and on the territories of Donbass, because we see signs of an information war launched against Russia.

Our mission is to make sure that there are only objective publications in the information space.

But there are several red flags readers should probably be aware of before trusting information from this site:

Other than the vague mention of "owners and administrators of several Russian non-political telegram channels" there is no indication who is running the site. No names, no organizations, nothing...

The site appears to be running on the popular WordPress software package, and via the URL https://waronfakes.com/wp-json/wp/v2/users (archived here) it is possible to glean a bit of information on the user accounts of the editorial team.

There seem to be five user accounts:

All five of them have their locale set to "ru_RU" so they probably are Russian. But who wants to get their news from bzEtYLvRlR, RsNPnyULYZ, oUPOOKEe and user99577 and not from named journalists?

According to Domaintools the site was registered anonymously via a Russian domain registrar on March 1, 2022, barely a week after the invasion of Ukraine by Russia:

A site being new isn't necessarily a sign it is untrustworthy but the lack of history combined with the anonymity does make it harder to gauge its reputation.

🚩 Originated from a partisan Telegram channel

Misinformation researchers at the Atlantic Council's Digital Forensic Research Lab reported on the origin of the site in an article titled "Russian Telegram channel embraces fact-checking tropes to spread disinformation":

On February 23, 2022, the Telegram channel Война с фейками ("War on Fakes") first appeared online, ending its first day with a modest 161 subscribers. It quickly skyrocketed; within two weeks, War on Fakes grew to over 625,000 subscribers and is now one of the top Telegram channels in Russia, with a reach of more than 30 million daily views. The channel, which presents itself as debunking the "information war against Russia," spreads disinformation and propaganda under the façade of a fact-checking service. Its staggering growth since its inception indicates it may be gaining traction more broadly, including through the publishing of an English-language website.

They also noted the channel was being promoted by state-funded and other propaganda sources:

The channel has started to receive some attention from mainstream Russian propaganda outlets, such as RT and RIA Novosti. For instance, RT cited War on Fakes on February 27 in a Telegram post that claimed a heavily circulated photo of a Ukrainian civilian injured during a Russian airstrike in Chuhuiv was likely faked, and that the same woman was photographed two days later with no injuries. This was also reposted by Vladimir Soloviev, a well-known Russian journalist and propagandist.

It is not just who is promoting the Telegram channel either. Promotion of the website itself seems to be part of a larger state-supported Russian effort. One of the first tweets mentioning the site (archived here) appears to have originated from the Russian Ministry of Foreign Affairs:

Since then the site and its articles have been heavily shared by Russian embassies and consulates around the globe according to data from CrowdTangle:

The site does not appear to have a page explaining its fact checking methodology (as would be required by the IFCN Code of Principles) but it appears to use a questionable one. In several cases the site (correctly) debunks individual examples of something but then puts a headline over them making an absolute or overly broad claim not supported by the fact check. Take this example (archived here): 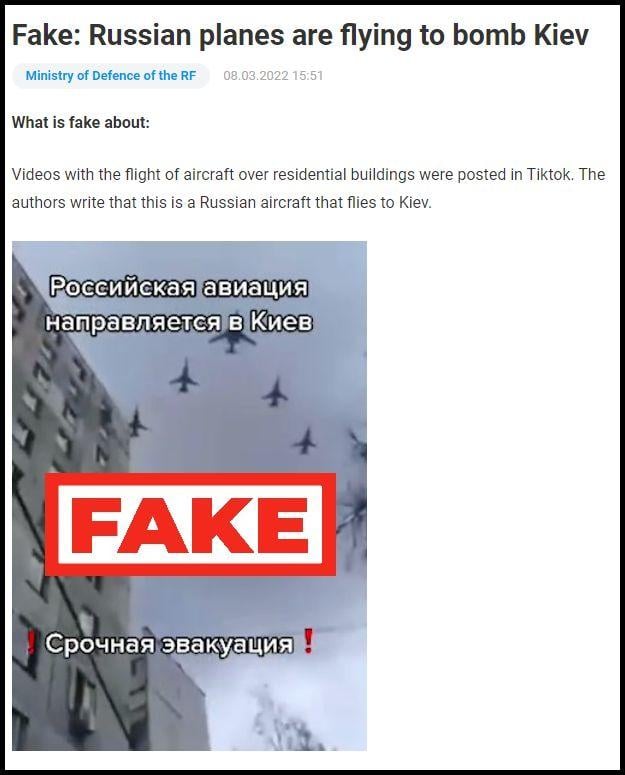 It correctly fact checks the video in question and notes, like we did, and finds that it is footage from an airshow: Fact Check: Video Does NOT Show Airstrikes In Ukraine -- 2020 Moscow Airshow Rehearsal Footage. But the fact that claims about this single video are false is not evidence there are no Russian planes bombing Kyiv. The only valid conclusion a fact checker can make based on analyzing this footage is that this particular video does not show bombing of Kyiv.

Or take this other example (archived here): 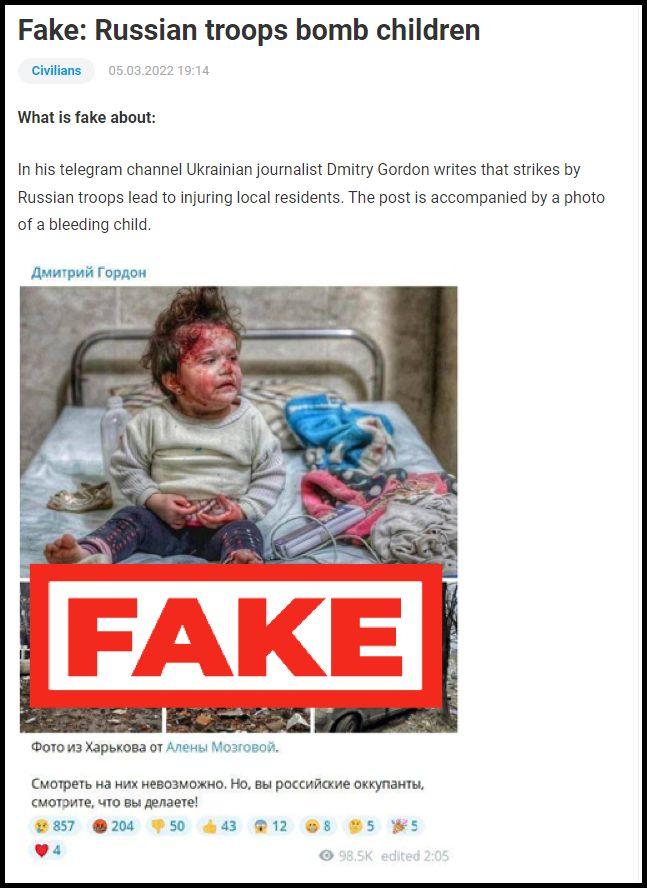 Just like many other fact checkers, the site correctly notes the picture is actually from Syria and dates back to 2018. But that isn't broad proof of Russia not bombing children (anywhere, ever). The only conclusion a fact checker can legitimately make based on looking at this photo is that the picture is not from the Ukraine war. Compare the War On Fakes headline with some headlines from real fact checkers:

You'll notice none of them offer conclusions beyond this single photo.

🚩 Unknown to the IFCN

The International Fact-Checking Network, an international organization grouping fact checkers from dozens of countries claims they never heard of the site and that even if it contacted them it would have little interest in dealing with them because of the obvious political slant of the site. When contacted by Lead Stories the IFCN sent us following statement:

We maintain our commitment to empower independent and genuine fact-checking over politically motivated propaganda outlets through our rigorous Code of Principles process. Neither have we received applications from such outlets nor are we interested in communicating with them.

🚩 Even the logo of the site is partisan

The very logo of the site appears to form the letter "Z" if you look at the text and the red diagonal:

The same "Z" also found on much of the Russian equipment taking part in the invasion of Ukraine: 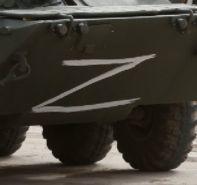 The "camera being fed money" motif seems to have been taken from this cartoon that has been around since at least 2014: 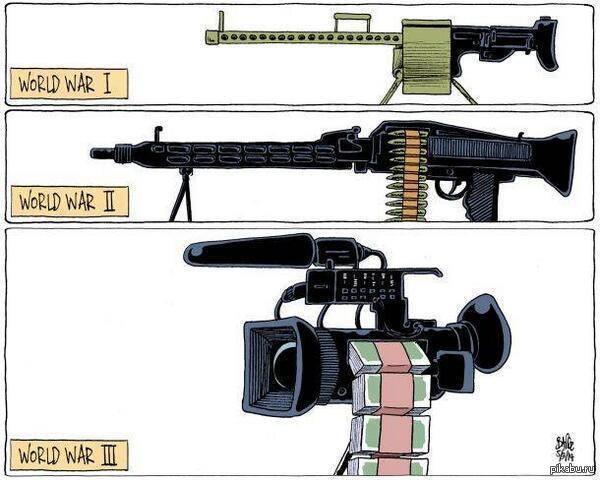 The only alteration that was made seems to have been the not-so-subtle addition of a CNN logo to the camera: 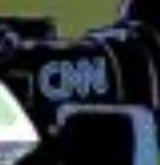 There are several obvious red flags about this website. Our advice would be not to trust anything from it without additional verification from neutral or independent sources. Which is a good principle to go by in general.