Fake/satirical website The Resistance: The Last Line of Defense seems to have taken the turn from fake news to something dangerously close to full-on fraud with this article titled: "'Joe The Plumber' Dies In Freak Accident After Announcing Bid For Congress". The death hoax opens:

"Joe the Plumber" Wurzelbacher, the tradesman who made a name for himself by making Obama look foolish on the campaign trail in 2008, died this morning unexpectedly when a piece of heavy equipment fell over and crushed him at a ribbon-cutting ceremony in his hometown of Camden, New Jersey. Joe, who wasn't really a licensed plumber and has since held onto his 14 1/2 minutes of fame somehow, had just announced that he was running for Senate to replace Senator Hal Lindsay, who was found dead of a heart attack yesterday after his ranch in Minnesota was raided for drugs and tied to the Clinton Foundation.

Note: the senator "Hal Lindsay" character is part of another hoax the site is running which we debunked here.

It's not unusual for The Last Line of Defense to be publishing death hoaxes, the site has done it several times before: Ted Nugent, Scott Baio, Clint Eastwood, Tucker Carlson, Monica Lewinsky... What is unusual this time is that the article contains a link to a "Go Fund Me" crowdfunding campaign to raise money to "Help Out With The Family". We've archived a copy of the fundraiser here as we suspect Go Fund Me might take it down in the near future. 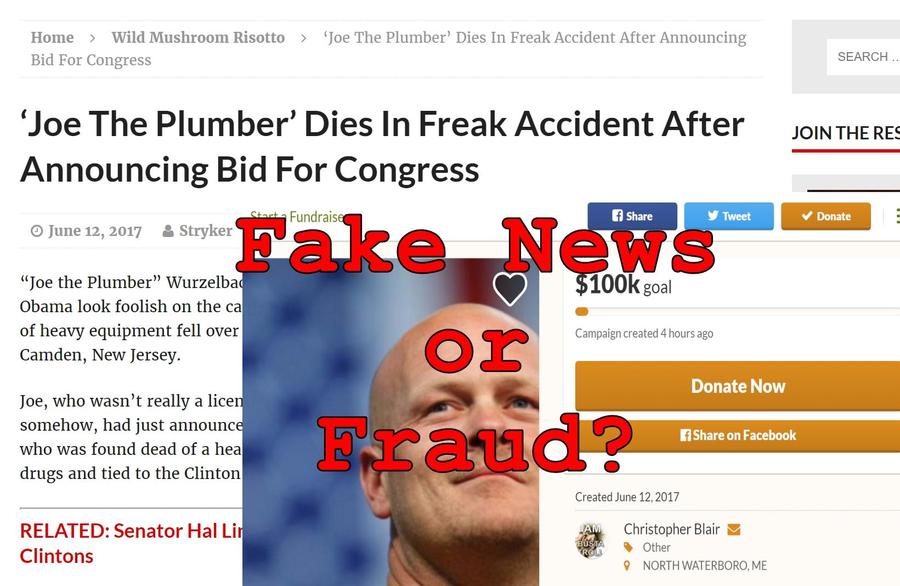 Technically the crowdfunding page does not explicitly mention Joe "The Plumber" Wurzelbacher and it only mentions "Christopher Blair" as the campaign organiser, along with the campaign description that reads:

This is the place where people can donate money to a great cause because they love Joe.

We guess you could read this to mean that if you love Joe you can donate money to help Christopher Blair out with the family and so it might technically not be against Go Fund Me's terms of service. The article pointing to the campaign also doesn't actually say the money will go to Joe Wurzelbacher's familiy:

His wife released a statement a moment ago thanking Joe's fans for support and asking them to go and click on as much as possible on his "Joe For America" website so she and her kids can somehow survive without him. A GoFundMe was set up you can use for donations to a great cause.

But it does seem like the site is at least trying to create that impression to directly scam money out of the pockets of gullible conservatives. Up until now the site just seems to have been using advertising to make money off them indirectly. The Resistance: The Last Line of Defense is a fake news website that carries following disclaimer on its about page:

According to Buzzfeed the site was originally meant to troll conservatives with over the top satirical articles but now appears to be used as a 'source' by a large network of actual fake news sites (not related to the original creator) that all repost the same articles mentioning it as the source but not acknowlediging the satire disclaimer. This causes many people to believe the fake stories especially when they are being shared on social media where all context is removed and only the title, image and description remain. Politifact identified a liberal from Maine by the name of Christopher Blair as the owner of The Last Line of Defense.

It looks like not many people have shared the story yet as evidenced by the Trendolizer graph at the end of this article. But Christopher Blair may be counting on the legion of fake news websites that copy his content without permission to actually promote the Go Fund Me link for him. Don't fall for it and warn other people by sending them the link to this article!